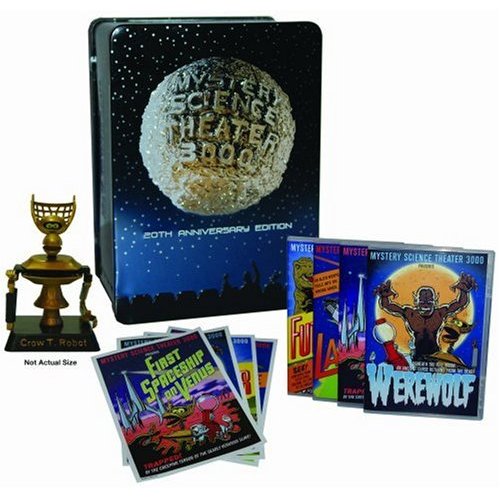 Warning: You’re about to read the far-too-lengthy diatribe of a nerd obsessed with Mystery Science Theater 3000. There is far too much information here. All you really need to know is that Shout Factory’s first MST3K DVD set is great, with a collection of great episodes, and if you’re lucky enough to find the special edition with the tin and Crow figurine on sale, get it.

Why? Because Shout seems to have low-balled the amount of rabid, insane MST fans. TV Shows on DVD reports that virtually all of the editions with the tin and Crow have sold out despite the fact that the set isn’t even available until tomorrow. So Shout’s going to rush the DVD-only version of the set into stores, which is good, but if you’re looking for what is effectively the only MST toy/figurine ever made in its 20-year history, you’d best have pre-ordered the set on Amazon a few weeks ago, or be waiting at your local Best Buy tomorrow morning when it opens.

Shout Factory ran out so early that they couldn’t even send a collector’s set to Topless Robot; I got the DVD-only version. Luckily for you, I am an insane MST fan and immediately bought the tin and Crow on eBay from some other reviewer who didn’t love his enough. I’m glad I did; the tin is awesome, although it’s waaaay too big to put on your DVD shelf (I plan on using mine to hold toy accessories, or the lockets of hair of my victims). The Crow figurine is literally something I’ve wanted for decades. It’s 4-inches tall, and while the eyes might be a bit small, it’s otherwise utterly accurate. I hope to goodness if Shout makes a Tom Servo for Vol. 2 (and then Gypsy and Cambot, pretty please) they make more, because all the fans deserve to get a chance to own one of these.

I swear to god I’ll discuss the movies after the jump.

…but in a minute. The only other thing the tin comes with that the DVD version doesn’t are four “lobby cards,” which are just cards of the DVD covers, each a kind of mash-up of a movie poster for each flick, but with Tom and Crow. I think these are awesome, and hope Shout continues the style with all of their MST releases. The DVDs themselves have an animated opening menu of low-tech CG, again starring Tom and Crow, but specific to each movie; for instance in Laserblast, Crow menaces Tim with the laser, while in Future War, the SOL is full of boxes and occasionally the shadow of a dinosaur puppet falls over them. While I appreciate the effort, I’m not a huge fan of the menus, just because CG just feels so non-MST to me?I think a static shot would be fine, really. But that’s very much just my opinion. Now to the movies (finally).

First Spaceship on Venus ? This season 2 Joel-era movie is one of the countless “shoot a group into space and watch them flail around” sci-fi MST movies, which are all pretty indistinguishable from each other. I’ve seen the movie four times, and I can never remember what happens after a day or two. The episode was made just before the show hit its groove (the next episode was Godzilla Vs. Megalon), so it’s fun, but certainly the weakest of the four.

Laserblast ? This long asked-for flick is the final Comedy Central episode, where Dr. Forrester pulls the plug on the Satellite of Love, Mike puts on a Captain Janeway costume, and it ends with a savagely awesome 2001 parody. The movie is about a dim-witted, shirt-challenged teen who finds an alien laser in the desert, then very, very slowly wreaks havoc in his terrible, cracker-filled town. Roddy MacDowell guest stars, and it’s really sad. It’s a great MST movie, but the significance of the host scenes make it a must-own.

Werewolf ? Some people like the MSTs that have semi-decent films; they need the movie to be coherent, if bad, in order to enjoy it. Not me. The more fucked-up and incompetently a film is made, the more I love it, and that puts Werewolf in my top three MST episodes of all time. I can’t possibly explain all the badness, but here’s a sampling:
? despite being set in Arizona, none of the three leads speak English as a first language
? despite being a werewolf movie, only one of the three werewolves bites anyone
? the first werewolf is disposed of with no problems, while the second?and I am not shitting you?drives a car into a bunch of oil cans
? as per Bill Corbett: “The many werewolf looks this movie presents: Sometimes simply a wolf, other times a kind of man-bear, other times a sort of fruit bat puppet, and at still other times just a guy with the mumps overdue for a shave”
Plus you can barely hear the actors, there a crazy hillbilly/militia man for no reason, no one can even say the word “werewolf” properly…oh, it’s bliss.

Future War ? Another great Sci-Fi Channel episode, which has a weak copy of Jean-Claude Van Damme on the run from the pudgy cyborgs and dinosaur puppets. See, he’s from outer space, where cyborgs have enslaved humans and turned dinosaurs into hunters of slaves, as is totally reasonable. And there’s a nun who’s a former prostitute who uses her old contacts to assemble the least-threatening group of “street thugs” you’ve ever seen to combat the cyborg/dinosaur puppet menace. It’s very, very bad, and absolutely wonderful.

Shout has included the original trailer for each of these films, which is fantastic?it’s always a great counterpoint to see what the filmmakers thought they were trying to do. Other extras include a great three-part “History of MST3K” documentary, spread out over the first three DVDs; it talks to everybody, and has some great anecdotes even I didn’t know. The fourth disc includes the SDCC MST3K Reunion Panel, hosted by Patton Oswalt, which is kind of awkward because Oswalt rambles too much and it duplicates a lot of stuff said better in the doc, and it’s just uncomfortable. Last but not least, Shout has also included a history of the MST Opening Theme, most notable because it has the original, Pre-Comedy Channel KTMA opening. Neat!

All in all, you must have this as an MST fan, and its superb collection of movies would make it a great gift for casual fans of bad sci-fi movies. I can’t wait for more sets. Just leave the special editions for us hardcore fans, all right?