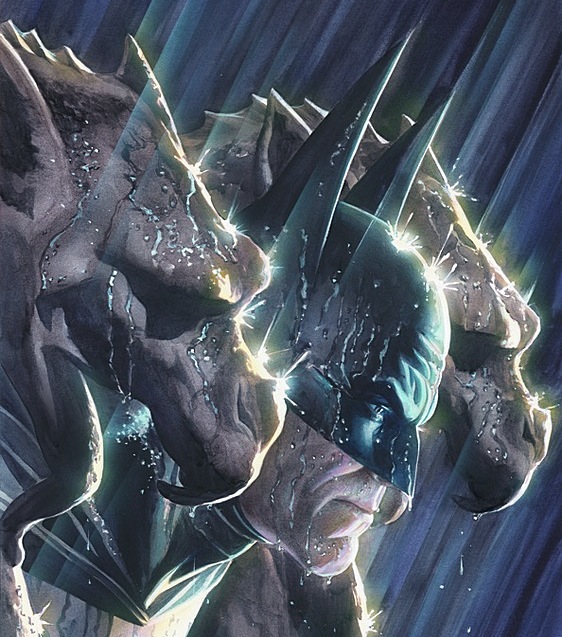 Batman #681, the conclusion of Grant Morrison’s “Batman R.I.P.” storyline–and the tale where Morrison said Batman would face a fate worse than death–hits comic stores today, and the fans are already bitterly divided and freaking out. Why? Because of the big reveal, of course, which is waiting for the spoiler-loving after the jump.

Here’s how Wikipedia sets it up:

At an unknown location, a group of international supervillains
gather at the behest of the Black Glove, represented by Dr. Simon Hurt,
the man responsible for the isolation chamber experiment that nearly
ended Batman’s career and for the creation of the three replacement
Batmen. …

Meanwhile Commissioner Gordon tries to stop a Gotham newspaper from
running a story on a dossier allegedly compiled by a detective hired by
the parents of Martha Wayne, which contains many shocking allegations: testimony that Thomas Wayne was a drunk who addicted his wife to heroin, insinuations that Alfred Pennyworth
is Bruce Wayne’s true biological father, and photographs depicting an
orgy involving Thomas and Martha Wayne, Alfred, and the stars of John
Mayhew’s noir film “The Black Glove” and the theory that Thomas Wayne
may still be alive, the “murder” of the Waynes was in truth an
elaborate hoax, arranged by Thomas Wayne in order to kill his
unfaithful wife and fake his own death.

Then a lot of weird shit happens, including Batman having a back-up psyche of some crazy-ass alien Batman he met during the Golden Age (Batman of Zur-En-Arrh), and Dr. Hurt actually being someone else who wore the skin of Dr. Hurt at a fancy dinner party, with no one noticing. So in #681, Batman meets the Black Glove and it’s…

Or he says he is. I have little doubt this will be retconned in the next six months, year tops. But for now, Wayne has announced that he hired Joe Chill to kill his wife and little Bruce and fake his own death, but that Chill couldn’t go through with killing a kid. Which make Papa Wayne evil, Joe Chill the guy who saved Bruce’s life, and Bruce’s reasons for being Batman totally null and void. Oh, and then Batman appears to die in a helicopter with his dad, although Batman is wandering around “Final Crisis” like six months later. No one knows what’s going on there.

Many Bat-fans are, of course, freaking the fuck out. They hate that this negates Batman’s whole reason for being, but of coure that was exactly the point. I think it’s a hell of a cool idea, and it certainly takes Batman in a place he’s never been before. And it’s not like Bruce and his origin won’t return to the status quo sometime soon. So…yeah. Sucks to be Batman, for the like 493rd time.