You’re looking at the new masterpiece Grimlock from Takara. If it’s like the other masterpiece figures, it’ll be plenty tall, and Grimlock is rumored to have a LED light in his arms, so his energy sword lights up. Big Bad Toy Store also says his eyes will change colors, both in his robot mode and his tyrannosaurus mode, which is pretty sweet. This site has several more pics, including an accessory which links Prime to Grimlock’s head, which I distinctly remember from the Transformers cartoon, but with no detail. 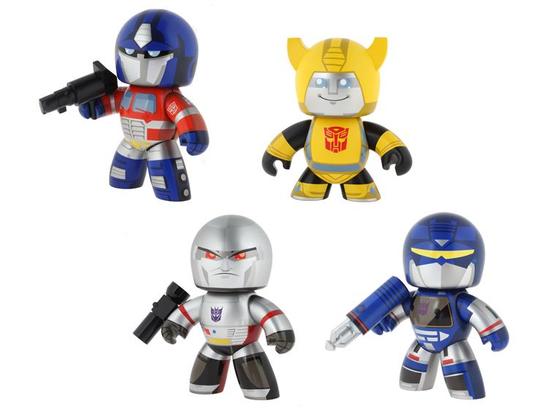 Now please contrast the awesome Grimlock to Hasbro’s incredibly shitty Transformers Mighty Muggs. I generally approve of the vinyl toy-inspired Muggs, and think some of the Marvel and Star Wars ones have been incredibly cool. But the Transformers suck. Forcing them all into the identical, overly simplified body just destroys the Transformers visual appeal, and for some reason, Bumblebee’s dopey-ass smile makes me want to kick him in the face and never stop. Grimlock, you do smash these little abominations. Pretty please? (Via 16bit)