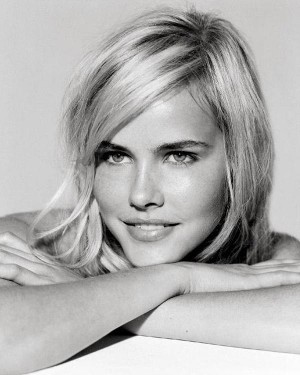 That’s Isabel Lucas, one of the actresses in Transformers 2: Revenge of the Fallen. There is absolutely nothing interesting about her…unless you want to follow me after the jump.

Transformer World says they have confirmed that Isabel’s character, Alice, is a Transformer?basically, one of those horrible, mincing, camera-mugging bots like Frenzy, who has an attractive blond shell. TFW goes so far as to announce that she’s a Pretender.

For those not familiar with Transformers sublines from the 1980s, Pretenders are Transformers that are hidden inside a shell that acts as their disguise. In the case of Alice, the shell will be an attractive human woman while the inner robot is best described as a hybrid of the Frenzy robot design from the first movie. The Pretender Transformer will have an arm that transforms into an energy weapon, a long tongue, and a scanning tenticle.

I have a hard time imagining that Michael Bay has been poring over old Transformers stories and trying to find cool, obscure shit to use; I honestly think he’s just making shit up and when someone tells him it has some kind of goofy precedent, he shrugs.

If you thought I was going to go off on some kind of rant about this…well, I did too. But I don’t care anymore. I know a few of you have chided me for thinking the live-action Transformers should be G1-centric, that this movie is it’s own thing. Maybe I finally get that now. The live-action Transformers movies have nothing to do with the cartoon of my youth. I can accept that. The only problem is that I’d like to watch a live-action, G1 Transformers movie, and I have absolutely no desire to see this nonsense. Thanks to old-time strongman Hugo for the tip.