Menu
Home
>
Anime
>
Japan Will Not Rest Until Gundam Is Real 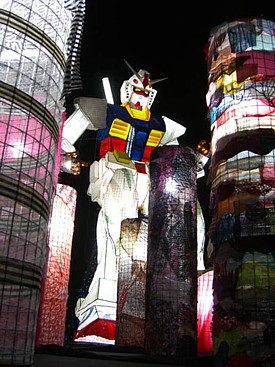 This is one of those time where I just quote the article?I know it’s long, that’s because so much of it is so insane. From the Times Online:

In an attempt to inject ?the most inventive possible thinking? into Japan, representatives of many of its most august universities are to become a ?virtual faculty? of the Gundam Academy ? the first academic institution based on a cartoon.

Next year dozens of engineers, astrophysicists, doctors, anthropologists, linguists ? even town planners ? will begin discussing how to convert the science-fiction series Gundam, created by Yoshiyuki Tomino, 66, into reality.
…
Central to Gundam are the huge, occasionally dysfunctional, battle suits used by the characters to settle squabbles that arise as humanity fights over resources and power. The robotic engineering, the low-gravity control mechanisms and the life-support systems will all be subjects at the Gundam Academy.
…
Shinya Hashizume, a professor of urban planning and architecture at Osaka Prefectural University, said: ?Gundam presents the reader with many challenges that we will encounter. It is vital to begin conducting research into these. Scientific research in Japan desperately needs a flow of new ideas.?

If they are successful, the founders of the project told The Times, institutions and companies across Japan could embark on new fields of research: everything from the perfection of a universal translation device to moon settlements and the construction of a mega-particle cannon.

Do you know how this ends? With a fat Japanese nerd dressed as Char Aznable crashing a space station into the Earth. I hope you’re happy, Japan.