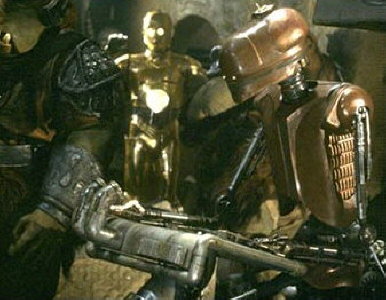 Robots have always sort of scared us; this was the beauty of Robbie the Robot in the ’50s, R2D2 in the ’70s, and Johnny Five in the ’80s. They were nice; sure, they were robots, but they were on our side. Not coincidentally, they were also emotional beings?unlike other robots of their kind in that one way that gives us the circuit-board heebie-jeebies in the first place. That?s the source of the fear: that it would be easy for us to find ourselves at the absolute mercy of a cold, calculating robot populace with mechanical super-strength, super-processors for brains, and the logical realization that humans are just in the way.

Some robots, though, aren?t worried about taking over the world, or eradicating humanity as a species. Some of them are just jerks, pure and simple, and they do it in different ways. Just like humans?which might give us some comfort, anyway.

Granted, Threepio is perhaps the most inconsequentially bastardly robot on this list, but he deserves mentioning if only because he points out time and again just why you wouldn?t want him on the Millennium Falcon as you were traversing the vast emptiness of space: because he?s a complete kvetch. He?s the superego to Artoo?s id; he?s all rules and regulations, all ?it seems we were made to suffer? this and ?chances of success? that. And what?s worse, he?s the one that gets blown up all the time, and has to be carried around in a net over Chewie?s shoulder. C-3PO, we love you man, but seriously?that ?shutting down? thing you did in the early going of Episode IV? Yeah, more of that, please.

9) Rosie from The Jetsons and Irona from Richie Rich (tie)

Were all robot maids created on the template of Florence from The Jeffersons? And if so, why? Granted, of this pair, Rosie bears the stronger resemblance to Marla Gibbs (both in temperament and, oddly, bodily figure), but Irona has her share of scoldings in her cleaning-woman robotic shell too?just with a bit of ?Amelia Bedelia? thrown in for good measure. (To be fair, Irona is completely malleable in Richie Rich comics, like most tertiary characters, given to complete changes in personality to fit the thin given story at hand. Harvey comics have never been what one could call sticklers for continuity.) Given that both these electric chambermaids were created long before George Jefferson ever yelled for Weezie, it?s obvious that they couldn?t have been direct pulls, but it?s remarkable that even artificial assistants feel the need to stick it to the man every once in a while. 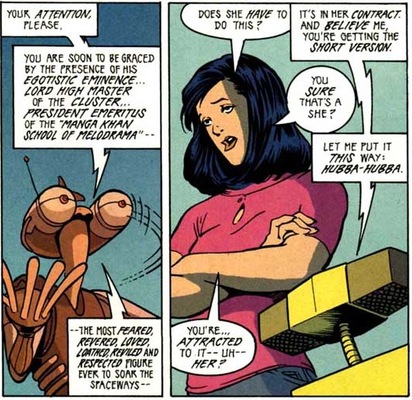 Follow me here: L-Ron (full name L-Ron H*bb*rd?no, I wish I were kidding) started out as a Justice League villain, based on classic villain Despero (the model to which, officially speaking, he is Mark II). But he, as they say, ?got better,? and became a member of the League?s supporting cast. And what with his robotic nature and his obviously parodying name (to no apparent effect, I might add), writers Giffen and DeMatteis decided to make him into an overly-ingratiating sardonic toady that looks (and sort of acts) like the robotic love child of H.E.R.B.I.E. and Crow T. Robot. Add all these elements together, and you?ll be completely exhausted.

Maybe this particular robot was doomed from the start; not only is he a animatronic 1970s street-pimp clich?, but he?s also doomed to rhyme everything: ?All the bitches think I?m pretty; got my face at Circuit City?? and ?Got a nose full of candy and an ass made by Tandy?. Also, I?ve always wondered if one of Pimpbot 5000?s many ho?s includes Cherry 2000? Seems like a natural fit.

The droid supervisor in the bowels of Jabba?s Palace (?You?re a feisty one, but you?ll soon learn some respect??) was really just the office bitch. Yeah, I know, the ?extended Universe? of Star Wars gives her more of a storyline, making her out to be a sadomasochist, but really, wasn?t it enough that she was the equivalent of Hitler?s administrative assistant, gleefully serving in the support staff of evil? (Also, torturing droids is just stupid?if you have to create a pain-sensing chip or something in order to ?burn? the metal feet of that power droid? Seriously, be evil smarter.)

It?s easy to chide replicant Roy Batty for his murderous streak, or his annoying tendency to wax eloquent, misquote William Blake, and get all Christ-like while watching the night sky, talking about fiery angels falling, and ramming a nail through the palm of his hand. But really, Batty is on this list for one reason: the bastard gets to you. Damn you, Roy Batty. Damn you for making me care. Also, quit being so damn chatty. It’s raining outside, jerk!

Sarcastic, intolerant, irritable, and in love with the sound of his own automotive voice. That?s KITT, played by William Daniels, as foil to none other than the Hoff himself. KITT was frankly obnoxious, and seemed to enjoy it too?he knew he was the shit as high-tech talking vehicles went, and he obviously didn?t care what else you thought of him. The funny thing is, William Daniels played the exact same character as Chief of Surgery Dr. Mark Craig on St. Elsewhere, and no one noticed.

Thundercleese is your basic jerk-neighbor: overly concerned with his garden, lacking basic social skills, yearning for the sweet taste of battle, that sort of thing. But then again, any killbot with both a lightswitch of Total Devastation and a secret love of vacation surfing can?t be all bad. 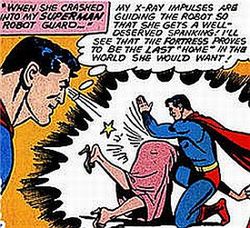 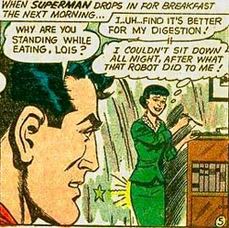 You know, you?d think if a superhero had the ability and wherewithal to actually build a secret army of super-men, he?d then use said secret army for, you know, things like saving airliners from crashing or evacuating villages from an approaching lava flow, or even catching bad guys. But no; these robots basically wait around in a Fortress of Solitude closet for Superman (whom they disturbingly call ?Master?) to use them in yet another in a long line of schemes to trick Lois Lane. Now that?s heroism for you. Granted, this means that Superman is really the dick here, and that the robots are just programmed for dickishness, but you know, potato, pot-ah-to.

Just because he works so hard at it. He smokes, he gambles, he whores it up, he cheats, he steals, and he lies. And he?s proud of all of it. Of course, like all true bastards, he has some saving grace; sure, he loves folk music, and sometimes a soft spot for his friends. But more importantly, he snuck into the Cantina scene in the Family Guy?s Blue Harvest, which is awesome. And he kidnapped Jay Leno?s disembodied head. That last one alone makes him my hero.