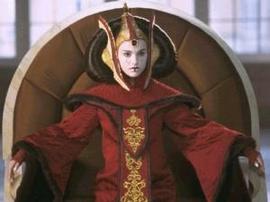 We all know that Luke Skywalker is hardly the sharpest lightsaber in the Star Wars galaxy (literally, check out RotJ?it must be set to ?bludgeon? on Jabba?s sailbarge). While obviously his father Anakin is also dumb as a box of bantha poodoo, Topless Robot has made the stunning realization that perhaps his mother is equally to blame. Sure, Padm? Amidala can shoot a laser blaster and look pretty, but what beauty pageant entrant/political figure can?t? (*cough*) Seriously, Padm? is so dumb that Anakin looks like?well, not smart, exactly, but not quite as dumb, and this is a guy who attacked Obi-wan when he had the high ground (the moron). Here are the five biggest reasons Luke and Leia?s mother might just be the dumbest person in the Star Wars galaxy.

Seriously, think about this. Say all her goofy-ass outfits are part of being elected Naboo?s queen, although the later queen?s outfit was far more demure. As Queen, couldn?t she say ?Can we have a representative of our people not look like a crazy geisha puppet?? I mean sure, a girl may want to have a pile of hair shaped on her head making it difficult to turn your head rapidly unless you risk falling over from becoming unbalanced, but that?s only if she?s retarded. Perhaps the clothes and the hair prevented her from running off with more mentally unstable young men. Recall that not a single other person in the galaxy dresses like Queen Amidala?not in the senate, not on any other planets, and not in any of the films?and she dressed stupid well after her term of queen was over.

4) She Never Realizes Palpatine Is Evil

Admittedly, everyone in the Star Wars galaxy circa the prequels is guilty of this, but of anyone, Padm? should know better. She?s a politician. Sure, Naboo seems like the Mayberry of the galaxy, but anyone with a few firing synapses should have figured out something was up by Attack of the Clones. For instance, as soon as he got himself elected Chancellor of the Republic after a sympathy vote that occurred after a vote of no confidence he suggested she put forth, Padm? should have said ?You son of a bitch! This was your plan to become chancellor all long!? Ah, but no. It was only after he had pretty much taken over the whole galaxy that she said to herself ?Oh, I guess he wasn?t the benevolent old man he appeared to be.? I wonder how many kindly old men of Naboo came to her with seemingly innocent ideas that turned out to be horrible? ?Queen Amidala, we would like to build an orphanage for Naboo children,? a man with the gentle face of Mr. Rogers would offer to her. ?Sure, go ahead,? she would reply with an approving wave of the hand. A year later, the people of Naboo start wondering ?Where did all the orphans go?? and ?Why are these Foundlingburgers so delicious??

Tell me this is a scene between two people with a combined IQ over 60. You can?t, can you?

2) She Falls in Love with Anakin Skywalker

Ladies, I have no doubt you?re all swooning at Anakin Skywalker?s erotic talk of sand (above) and the orifices it gets into?presuming, of course, you?re as dumb ad Padm?. Honestly, what girl wouldn?t fall in love with Anakin Skywalker, with his creepy stare, his slow, unwarranted petting of a girls? back, and his brutal murdering of entire families of Tusken Raiders? Not only does Padm? not have that part of her brain that waves a red flag when she sees a very clearly mentally insane person, she instantly falls in love with them instead (which explains her decision to chase Anakin down after he butchers a second set of children, the Jim Henson?s Jedi Babies from RotS). If Anakin was her one true love, I would have hated to see her previous boyfriends and their long prison sentences. Also, there?s no blaming Padm? on being blinded by Anakin?s good looks; Anakin looks less like George Clooney, but more like a guy who got kicked out of his ?80s New Wave band after a nine-month bender on cocaine.

1) She Dies of a Broken Heart

The heavily pregnant Padm? doesn?t die of internal injuries after being Force-smacked by Anakin, she dies of?a broken heart. So she dies of the intense sorrow of losing the one she loves. Man, tell that to Corde, her decoy from AotC?that handmaiden would have felt really good getting blown up to protect a girl who would eventually die not of an assassination attempt, but of sadness. Also, isn?t it just slightly irresponsible for Padm? to give up on life because she’s unhappy right after giving birth to twins? She quickly shouts out the names she picked up for them and then dies. Hey, if you?re going to give up on life because you?re broken up over your man, you don?t get to name the kids you just left orphaned for other people to raise. Idiot.