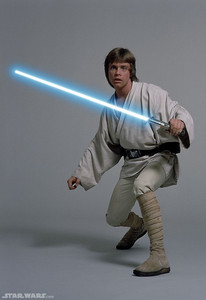 We all know Luke Skywalker as the main protagonist throughout the original Star Wars movies and onward into the novels of questionable quality. We all grew up wanting to be him–learning to use the Force, blowing up the Death Star, saving the galaxy. But the thing is, despite all his badass moments, he actually kind of sucks. Perhaps not as much as his father Anakin, but that could be due to Mark Hamill’s acting ability, in that he can act. Sure with the emotional music and all the screen time Luke Skywalker seems to be the hero, but really he’s an idiot who makes bad decisions and has a series of terrible ideas, and he’s lucky it all kind of works out for him, his friends, and the Rebel Alliance in the end.

I have never really figured out what was so special about Luke using the Force in attacking the first Death Star. As far as I could tell, it did nothing but give Darth Vader a slightly higher level of difficulty in blasting his X-Wing, which he seemed to aptly overcome as he blew up R2-D2, and proceeded to almost blow the crap out of Luke’s X-Wing had Han Solo not saved his ass with the Millennium Falcon. Some might say his use of the Force involved him turning off his targeting computer and trusting himself to shoot the exhaust port. If that’s using the Force then I am using the Force every time I turn off my cruise control in my car. I mean, they make targeting systems for a reason, Luke–and chances are, the Rebel’s would prefer to trust your X-Wing’s highly sophisticated on-board computer than a mystical power you spent a few hours learning yesterday afternoon.

Luke gets a vision of his dead mentor Obi-Wan telling him to go to Dagobah to get training from the Jedi Master, Yoda. Luke obeys, goes out to Dagobah, finds Yoda, and then proceeds to ignore him at every important turn. Yoda tells him not to go into the scary cave with weapons, Luke doesn’t listen. Yoda gives him a lesson about overcoming great obstacles, and Luke doesn’t take it to heart, can’t lift his own X-Wing and gets all pissy. Yoda and the Ghost of Obi-Wan both tell him not to go running off to Bespin to save his friends as he’s going to endanger everything they fought for. Luke doesn’t listen, goes off to Bespin, helps nobody and gets his damn hand chopped off.

Well done, Luke. Why should “Obi-Wan coming back as a ghost to give important instructions” convey any significance to you? Why should you pay attention to the one muppet left in the galaxy who knows how to use the Force? You’re just a jerk who nearly turned into a Hoth-sicle–you surely know better than both of ’em!

Let us imagine that Luke Skywalker is trying to tell you his plan to rescue Han Solo from Jabba the Hutt.

Luke: “Okay so, first we get Lando Calrissian posing as a guard inside Jabba’s Palace.”

Luke: “We just get him a costume and he–just walks in.”

You: “Um, okay, say it’s that easy. So then Lando gets Han out of the carbonite and we pick them up and get away?”

Luke: “No. What happens next is that I put my lightsaber in a hidden compartment in R2-D2 and send R2-D2 and C3PO to Jabba the Hutt as gifts.”

Luke: “Just listen. Next we have Leia pose as a bounty hunter arriving at Jabba’s palace with Chewbacca captured. She’s going to hand over Chewbacca to Jabba.”

You: “Wait, why? Wouldn’t that mean we would now have to rescue Han Solo, Chewbacca, R2-D2 and C3PO? That just makes it more difficult, right?”

Luke: “Just go with me here. Next, Leia is going to sneak around at night and get Han Solo out of the carbonite, but get captured.”

You: “What? Why would we get everyone captured like that?”

Luke: “Now I’ll show up, use my Force powers to get in to Jabba’s fortress, get past the guards to an audience before Jabba and then use my Jedi mind trick to get Jabba to release everyone. If that doesn’t work, then I’ll get captured.”

You: “Okay, if you can just use your Force powers to get in to the palace and all the way to Jabba, then let’s just have you go in right now and get Han out.”

Luke: “No, that’s stupid. I’m going to get myself captured. Because then you see, we’ll be taken to the sarlacc pit and then, when we’re on the skiff, I’ll get sent out first and then R2-D2 will manage to get to the top of Jabba’s sail barge and shoot out my lightsaber, and then with Lando’s help, we’ll just–rescue everyone and then everything will be fine!”

You: “That is the stupidest plan I’ve ever heard of.”

2) Throwing Away His Lightsaber in Front of the Emperor

So Luke decides not to put his lightsaber through Darth Vader’s head once he realizes that he’s going along the same dark path as his father. So what does he do next? He tosses away his lightsaber and then proclaims to the Emperor that he is a Jedi. Thus, he has no way to defend himself when the Emperor blasts him with lightning and if it wasn’t for his Father saving his butt (please note how many times Luke gets saved by someone else) he would have been a charred piece of Tatooine bacon. Okay, yes, tossing away the lightsaber makes a definitive statement of renouncing Father-killing, but what did he think would happen other than the Emperor kicking his ass? Did Luke think that perhaps he would proclaim “I am a Jedi, like my father before me,” and the Emperor would suddenly shout “No! You are the purest good! I am nothing in the presence of your light!” and then fling himself backward into the chasm? Why didn’t Luke just try to give the Emperor a big hug and kisses and call him a ‘snookle bear.’ He’s a master of the Dark Side, so of course he’s going to kick your ass. Luke was warned not to underestimate the Emperor…so of course, he does exactly that.

1) Not Joining the Dark Side

No, seriously! Luke gets dumped on his whole life–his adoptive parents get killed, all his friends get injured or killed, the girl he falls in love with turns out to be his sister, his father turns out to be one of the most evil people in the galaxy, his hand gets cut off. Then he gets a chance to co-rule the galaxy. Who wouldn’t take that offer at that point?

What has Luke had to look forward to after the original trilogy? Mostly trying to start up the whole Jedi Order by himself, which is a ton of work, and watching Han have almost constant sex with Leia. Between that and ruling with Vader, it’s not unlike a choice between working in your local library and becoming President. Not really much of a choice there. And ou can comment all you want about the Dark Side being a path to pain and suffering and a loss of humanity, but let’s face it–the Dark Side is simply cooler. Members of the Sith have neat custom lightsabers, get to slap everyone around, and just plain look cooler. For Halloween, how many Luke costumes do you see people wearing nowadays? Zero. How many Darth Vader costumes do you see? Still too many to count. Bad is good, baby.