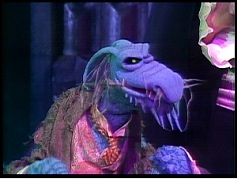 Elmo can, to steal a line from Louis CK, suck a bag of dicks. In recent years, the diminutive Muppet with the grating voice and terminal case of manufactured cuteness has become the focus of Sesame Street. As irritating as he may be, Elmo has somehow captured the minds of tykes across the globe. So screw him for being the Muppet du jour when so many of Jim Henson creations that have never gotten their proper due. With the DVD releases of The Muppet Show, Fraggle Rock and the amazing Sesame Street: Old School compilations, an entire generation can get acquainted with some Muppets that have been largely forgotten. It?s time to play the music, it?s time to light the lights, it?s time to meet the most underrated Muppets of all time!

Uncle Traveling Matt differed from the rest of the denizens of Fraggle Rock, in that he got to venture out into ?Outer Space? (better known as our world) and send postcards detailing his exploits back home. Always clumsy and confused, his misunderstanding of human society injected a bit of extra mirth into Gobo and the gang?s days. And he had wicked facial hair to boot.

As the ?intrepid and well-fed? captain of the USS Swinetrek during The Muppet Show?s ?Pigs in Space? segments, Link Hogthrob projected egotism throughout the cosmos. Both a puppet equivalent of Ted Baxter and the precursor to Zapp Brannigan, Hogthrob possessed a swagger that made him the series? greatest pig character?so bite it, Miss Piggy fans. When not narrowly avoiding death on foreign planets, he could be seen demonstrating his idiocy in other ways (most memorably as Fozzie?s commanding officer in the ?Bear on Patrol? sketches). The character hasn?t been used much since the death of Jim Henson, something that will hopefully change in Jason Segal?s upcoming Muppet opus. Until then, we always have this:

Also known as Fat Blue, Mr. Johnson is the bald, mustachioed Muppet in the business suit whose frequent run-ins with Grover prepared children everywhere for the ineptitude of waiters, cab drivers and other customer service providers. As a child, I thought it was hilarious how Grover constantly put the screws to him. But now that I know that life is full of Grovers just waiting to mess up your lunch order or put unnecessary charges on your cable bill, it?s not so funny.

Anderson Cooper? He?s a pretty boy. Katie Couric? Too serious. For my money, the greatest newscaster in the history of television is the Muppet Newsman. Think about it: he delivers the headlines with the sincerity of Walter Kronkite and stays on the air through the toughest of circumstances. Do you think Larry King would have the cojones to continue reading the events of the day after a piano hit him over the head? Not bloody likely.

Since Cookie Monster is now so neutered that he is often seen munching on carrots, it?s inconceivable that there was once a Sesame Street character who was a pusher. Before the show was overwhelmed by political correctness, Lefty here would often be seen trying to sell the show?s characters letters, numbers or non-existent items from inside his trenchcoat. When parents began to complain that Lefty?s appearances encouraged children to talk to strangers, he was dropped from the show. His current whereabouts are unknown, but if you ever want to score a W or a 4, maybe check the docks near Sesame Street. You never know.

If you ever had Muppet-inspired nightmares, chances are they had something to do with Uncle Deadly. A sinister looking blue creature, he haunts Kermit and the gang before embracing his role as the phantom of the Muppet Theater. What makes Uncle Deadly so memorable is design by Michael Frith that eschews the usual Muppet look for a more creepy aesthetic that kids found terrifying. Of course now that we?re older and less prone to pissing the bed, we can appreciate him for the badass that he truly is.

Sorry E.T. fanatics, there have never been more lovable otherworldly visitors than The Yip Yip Aliens. Looking like the offspring of a mop and the Fry Guys, these Martians attempt to learn about Earth by examining ordinary objects, yip-yipping all the while. In one of the greatest tragedies ever to befall mankind, the Palisades Sesame Street action figure line was canceled before it got around to making these guys. Yip yip yip yip yip yip yip uh-huh uh-huh.

Created by Sesame Street?s original Gordon, Matt Robinson, Roosevelt Franklin was a rhyming purple Muppet with spiky black hair and a red and yellow striped turtleneck who taught students about letters and numbers at the school that bore his name. Frequently breaking out into song (you owe it to yourself to check out his My Name Is Roosevelt Franklin LP), he brought some much needed funk to Sesame Street. Perhaps a bit too much for some viewers, as the character inexplicably vanished in the early 1970s. Was he yanked from the show because some felt that he reinforced negative African-American stereotypes? Or was it that parents didn?t think that a puppet who behaved so uproariously was a good role model for kids? Regardless of the real reason for his banishment from the street where everything is allegedly a-okay, he lives on in the hearts of true Muppet fans everywhere. Call him by his first and his last name, Roosevelt Franklin deserves your respect.