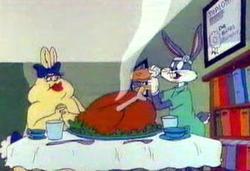 Ah, holiday TV specials.  Since the 1960s, kids have looked forward to these as a serious part of each season. What’s Halloween without fruitlessly waiting for the Great Pumpkin?  What’s Christmas without Grinch threatening to steal the whole thing, or Rudolph befriending an obviously gay elf with a tooth fetish?

But Thanksgiving specials? Yeah, sort of suck. They never really caught on, which at first might seem weird, considering that Thanksgiving is a lot about watching TV.  Eating too, of course, but the TV is always on in most Turkey-Day homes–football, Macy’s Parade, or the Dog Show that NBC keeps claiming is a holiday tradition (it’s not). But if you look at the specials that were made for the November holiday, it starts to make more sense, since as I said above, they just suck. Better, perhaps, to track down the Turkey-Drop episode of WKRP in Cincinnati, perhaps the only true Thanksgiving television worth watching, than any of these eight that follow.

I know, I know: heresy! But seriously, this is the worst of a very good set of early Peanuts specials. And it wasn’t even all that early; it ran in 1973, and was the tenth special in less than eight years, so maybe the mileage was beginning to show. The worst part of the special is sadly the very thing that made the Christmas and Halloween specials so memorable: the moral. And the moral of A Charlie Brown Thanksgiving is basically this: that Peppermint Patty is an obtrusive bitch. She supposedly learns her lesson, thanks in part to a Pilgrim quote by walking religious-reference Linus, but if you followed Patty as a character, you know: she so didn’t.

Only those who still have a Garfield wastebasket or an Odie and Nermal poster on their cubicle wall would possibly enjoy this cartoon. For those of us who can only enjoy Garfield now by omitting Garfield completely (in the inspired web-comic Garfield Minus Garfield), it’s a discomfiting reminder that the fat cat’s years of success isn’t so much a triumph of cartooning artistry, but rather a triumph of marketing over substance. Garfield is, to put it simply, the anti-Calvin and Hobbes. The one saving grace of this 1989 Garfield special is that it doesn’t threaten to lower our opinion of Bill Murray any further.

This whole 1998 special is about the usually benevolent creatures of the Hundred Acre Wood talking about preparing Thanksgiving Dinner, which comes off as sort of dark, since these are personified animals in a world where most animals are personified, talking about catching and eating another animal. I mean come on–given the Pooh-world, there’s probably a turkey named Gobbles who’s paranoid all the time. And for good reason, because every November his friends talk about hunting him down, cutting off his head, stuffing his ass full of bread crumbs and thistles, slathering his naked carcass with honey, and baking him in Rabbit’s oven. What’s next, slaughtering Piglet for an Easter ham?

5) Thanksgiving in the Land of Oz 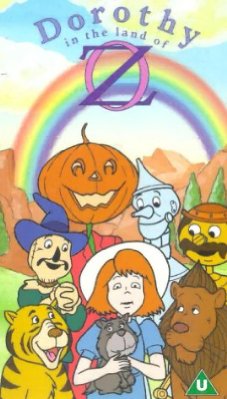 The what in the what now? Oz? Thanksgiving in Oz? If you’re thinking this sounds like a terrible idea, you’re right, but withhold judgment on how many “terribles” you might want to use until you hear the concept: Dorothy returns to Oz in a turkey balloon on the final Thanksgiving she’s to spend with her Aunt Em and Uncle Henry before they move to a retirement home (and apparently never have Thanksgiving again). No, that’s not a wizard you see behind the curtain; that’s the ghost of Frank Baum haunting the shit out of everyone responsible for this terrible 1980 travesty.

Warner Brothers cartoons have always had a dark side, but this ’78 special manages to be both vaguely mean and kind of a scam. For one, it’s all about Bugs Bunny putting a fat-girl rabbit on a diet for Thanksgiving, and then deciding at the end that everyone eats on Thanksgiving, so why not just indulge. (This was diet advice from the ’70s, when dieting meant a ground beef patty, and a scoop of cottage cheese sitting in a canned peach half.) More importantly, it’s really nothing more than a clip show with some newly created bumpers to act as intro, transition, and conclusion. That’s not a special; it’s a cop-out. If I can see the same stuff in rotation on any given Saturday morning, it sort of takes the “special” out of the special.

3) Mouse on the Mayflower

Sort of a sappy Pilgrim-precursor to An American Tail, a mouse tells the story of coming to America. It’s earnest, it’s musical, and it’s vintage (1968, specifically) Rankin/Bass. So how can one attack a show that’s this well meaning? Well, the fact that this is Rankin/Bass actually works against it; Tennessee Ernie Ford is no Burl Ives (no disrespect intended to Tennessee Ernie Ford, who doesn’t get the material that Ives did–and who, by the way, I always thought as a kid was related to Tennessee Tuxedo) and honestly, crappy animation doesn’t hold a candle to the charm of crappy stop-motion. In the end, though, it’s the historic nature of the piece that holds it back–after all, if Rudolph had to substitute Yukon Cornelius for Admiral Peary, he definitely wouldn’t have gone down in history.

2) The Thanksgiving that Almost Wasn’t

Let’s establish one thing before we launch into this: Hanna-Barbera was and remains a cornerstone of cartooning. That said, they didn’t accomplish that feat by breaking a whole lot of new ground. The same goes for this lame, by-the-numbers special made in 1972, in which the title is sort of lifted from the 1966 Italian film “Christmas That Almost Wasn’t”, the music was borrowed from Scooby-Doo, and the sound effects from pretty much every other Hanna-Barbera cartoon made previously. It’s one thing to see Shaggy and Scooby running frantically past the same sarcophagus six times in ten seconds; fully another for a Pilgrim boy to exclaim “Zoinks!” Which okay, he doesn’t, but it’s close. It’s very close.

1) BC: The First Thanksgiving

This 1973 special deserves worst-first for many reasons. First, it features its titular character as having the voice–for no apparent reason, mind you–of Jack Benny. Not the real Jack Benny (who was still alive when this cartoon was made, by the way), but a hammy impersonation of Jack Benny. It’s impossible, really, to argue about the depiction of a voice when transferred from a non-audio medium–after all, we have no idea what on-the-page characters on the page sound like in the creators’ ears. But it’s fair to say when something doesn’t make sense; just like I’m pretty sure Blondie isn’t a baritone, BC isn’t Jack Benny. More importantly, the show itself is a completely cynical attempt to cash in on Charles Schultz’ successful transition from the comics pages to small screens across the nation. The difference, though, is that Peanuts has charm and depth, while BC makes jokes like naming a character “The Fat Broad.” (You can watch the entire show here, if you don’t mind the insanity of someone taking the trouble to upload the BC Thanksgiving Special to YouTube, but refusing to let people embed it.) At any rate, given creator Johnny Hart’s later (and interminable) born-again zealotry, it’s ironic that the show sports the spiritual message of a sarcastic 1970s Hallmark birthday card.