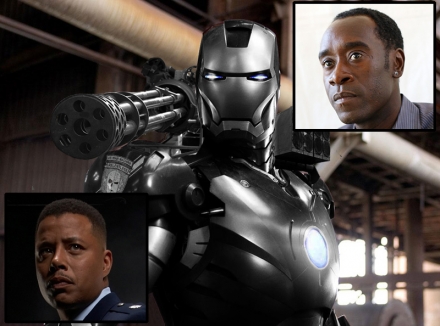 The recent Entertainment Weekly (the one with Daniel Craig on the cover) has a story about Marvel’s decision to replace Terrence Howard with Don Cheadle as Rhodey in Iron Man 2, and it’s pretty hilarious. As it turns out, Howard was the highest-paid actor in Iron Man?more than the star, Robert Downey Jr., or Jeff Bridges, or Gwyneth Paltrow?because Marvel hired him first when they didn’t know their pay-scale, and obviously was kind of retarded. That’s definitely Marvel’s bad.

So when it came time for Iron Man 2, Marvel offered Howard what was effectively a 50-80% pay cut?shitty, but absolutely in line with the amount of work he did and comparative to the other actors. Howard said hell no, and then sat around while Marvel offered the role to Cheadle. Now, I’ve got to say this is Howard’s fault?he didn’t get scammed, he just accidentally got lucky for the first film. Did he really think that Marvel was still going to pay him more than Downey? If so, he was an idiot. He should have taken the pay cut, because he still would have ended up as War Machine, which would have meant more cash for toy likeness rights, possibly videogame voice recording work, whatever.

Now, Entertainment Weekly also says they have sources that Howard was difficult on the original Iron Man set, and that director Jon Favreau had to re-edit the hell out of his scenes. Admittedly, these are unsubstantiated rumors, but we could do worse than to believe unsubstantiated rumors from EW. Oh, and the pic above comes from /Film?I don’t have Photoshop.