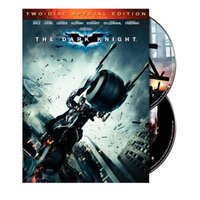 Yes, it’s the day The Dark Knight finally comes out on DVD. I was actually thinking of just skipping the rest of the day’s meager releases, but then I thought some of you–like myself–are actually expecting to get Dark Knight for the holidays, and thus might have some cash to blow on something else. So better safe than sorry.

? The Dark Knight
You can get just about any kind of DK DVD or Blu-ray set you want: one disc, two discs, with a digital copy, or with other junk. As usual, /Film has the best breakdown of all the different special editions, but unless have a Blu-ray player can get the set with the mini-Batpod, I suggest either going to Best Buy for the free posters and Joket playing card, or heading to Toys R Us for the mysterious “Batman Projector Flashlight” which is probably lame, but sounds like a mini-Bat signal.

? Lost: Complete Season 4
An excellent season of mindfuckery. Still, I can’t imagine owning Lost until it’s finally finished–owning part of it would be torture.

? Dragonball GT: Season One
The worst portion of the worst part of the Dragonball franchise. Well, until the live-action movie shows up.

? Gunbuster Vs. Diebuster
A special Blu-ray edition of the Gunbuster and Diebuster anime movies, available for a mere $100. Amazon has it on sale for $55 for those–you know what? Never mind. No one’s going to buy this.

? I Am Legend Special Collector’s Edition
I Am Legend was actually a very good movie, at least in the parts without the horribly fake CG monsters (or the ending that negated the title). This set has an extra DVD of extras, a concept art book and some art cards.

? Attack Girls’ Swim Team Versus the Undead
Yes, Japanese girls in swimsuits (and, apparently, out of swimsuits) fighting zombies. Say what you will about the Japanese, they aren’t afraid to get directly to the point.