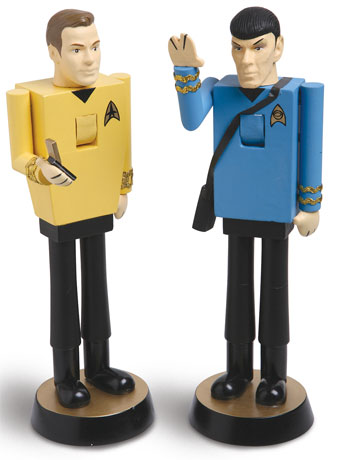 Remember those incredible shitty, horribly sculpted and yet still non-functioning Star Wars nutcrackers from a few weeks ago? Well, Chris Cummins (author of today’s Daily List, among many others) has shown me the flip side of the shitty, nutcracking coin (?), which features these impossibly terrible AND STILL NON-FUNCTIONAL Star Trek nutcrackers. What’s more retarded–the fact that these people are so stupid as to not locate the nutcracker in these characters’ mouths, or the fact that they’re charging $35 EACH for these miserable little shit piles? Bleagh.