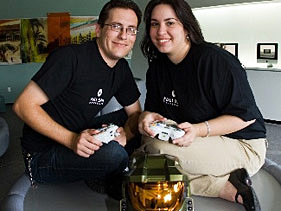 Desirai and John are big-time “Halo” players. She games under the name
SickNDeHed. He plays as PsychoVandal. They met when she lived in New
York and he was in Florida. She’d become Xbox Live friends with his
roommate, and they slowly started to play games together, regularly.
When he didn’t show up online one day during the time they usually
played, she sent him a message and her phone number.
…
They met in person in 2005. John picked Desirai up at the airport and
got her over her apprehension about a first kiss by kissing her right
in the terminal. She moved down to Florida to be around John and
enrolled in a graphic-design program at Full Sail University. And in
January of this year, as she was waiting for John to pop the question,
she had an idea pop into her head: a “Halo” wedding.

Aww. And I mean that, as in “aww, this is terrible news.” Why? Well, partially because I’m a bitter, terrible old man. Partially because this is the kind of heartwarming story that gives those nerds who can barely function in society a chance of finding the nerd girl of their dreams, when in fact they almost certainly will not. And last but not least, because this is exactly the kind of fate-tempting that ends up with two married Halo-playing nerds having twins who end up as the star quarterback and head cheerleader. Still, that’s no reason for you guys not say congrats to ’em, or at least check out more pics and their Halo-themed wedding invites over at MTV.