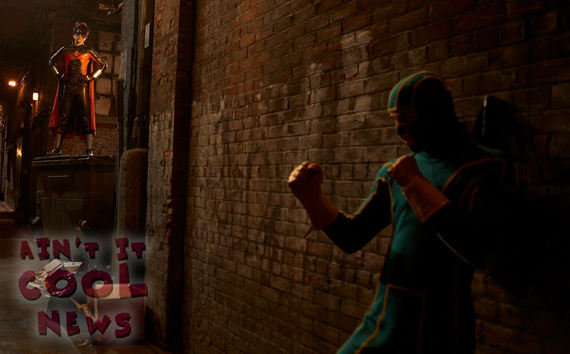 Ain’t It Cool has this pic from the Kick-Ass movie, based on one of Mark Millar’s independent and X-rated teen-boy-wish-fulfillment comic. Haven’t read it, but I assume both Kick-Ass (on the right) and the Red Mist (on the left, played by the guy whose name I would tell if it would mean anything, but it doesn’t, so I have to tell you it’s the kid who played McLovin in Superbad) are looking accurate to their comic counterparts, because they both look fucking ridiculous. If you want to read AICN’s usual 10,000-word tome on the set visit, be my guest. The rest you, tell me if I should be more excited about Kick-Ass than I was about Wanted before I watched it last night.