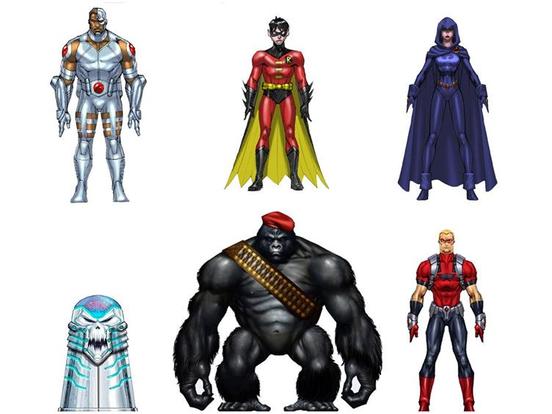 Especially the infinite part, because listen to how many 3 3/4-inch figures they’re planning on releasing in early ’09 alone (courtesy of Action-Figure):

And those are just the single-carded figures! there will also be three-packs based on Gotham Knight (the mediocre Batman anime) with Batman, Deadshot and Scarecrow, as well as a Shazam! pack with Captain Marvel, Black Adam and Mary Marvel. But the one I’m most excited about is the 6-pack you see up top (well, the art, anyways) ofRaven, Cyborg, Robin, Arsenal, The Brain and Mallah. I’m not a big DC fan, but I am a big fan of intelligent apes with foreign accents who are in love with evil brains in limbless robots, which is one of th e more sane things features in grant Morrison’s Doom Patrol. You guys can have the other four figures when I buy ’em.