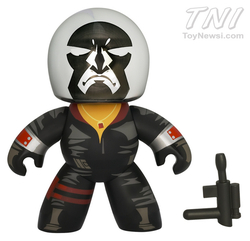 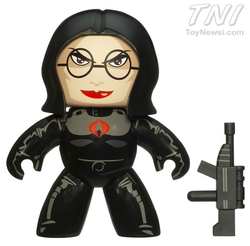 I think I’m done with Mighty Muggs. I really wanted to like them, at least when they were Star Wars and Indiana Jones-centric. Frankly, I still love the Lando Calrissian and the Mola Ram, if only because of my fondness for children’s toys that have human hearts in their hands. But since then, I’ve just been underwhelmed. The first wave of G.I. Joe Muggs was so-so, and the Transformers were awful. Now Hasbro has released the Baroness and Destro, and I think they nail is in the coffin. since several of you have bitched to/at me for my Mighty Mugg coverage, this should come as a relief, although I’ll probably just up my Galactic/Combat/Robot Heroes coverage instead, since I’m still in love with those little guys.

On an unrelated note, Destro’s oddly shadowed face reminded me of my childhood belief that Destro was black, despite his Scottish ancestry and the fact his figure’s chest is partially bare and clearly white. I honestly thought he was wearing a khaki shirt until maybe 2006 or so (and I’m not convinced his Mugg isn’t). Oh, what? Like that would be the stupidest part of his outfit. (Via ToyNewsI)