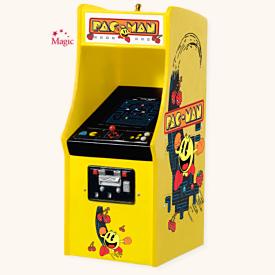 People have been adding ornaments to their Christmas trees–or “Tannebaums”–for hundreds, maybe millions of years. But nerds have only been adding specialized nerdy ornaments for a little over a decade, max. Sure, allowing nerds to add a little bit of their sci-fi/fantasy culture to a Christmas tree seemed like a good idea at the start, and an easy profit, but as usual when profit is to be made off nerds, things have gotten completely control. We nerds can choice almost anything to decorate our Christmas trees, from the sublime to the absolutely surreal, although very little of it actually conveys any kind of normal holiday spirit. Here are the nerdiest–and least Christmas appropriate–ornaments you can buy (sticking a hook through your Seven of Nine figure doesn’t count). 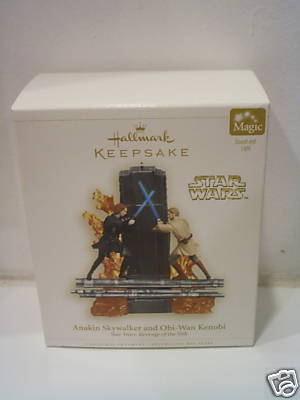 Granted it was a kickass fight, and one of the highlights of the Star wars prequels. But this ’06 ornament commemorates the moment just before Anakin Skywalker, fresh from killing a bunch of children, gets most of his limbs violently severed from his body and kicked into a volcano by his friend, who leaves him to die. It’s not exactly Bing Crosby tap dancing with Danny Kaye. Besides, it’s not exactly in keeping with the holiday spirit to remind guests of the prequels. 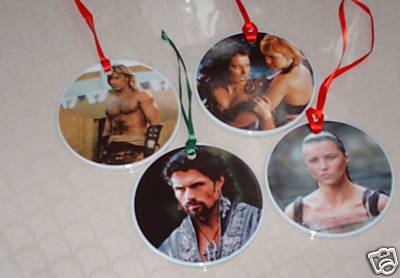 Shockingly, these colorful photo ornaments featuring images of a beefy, bare-chested Kevin Sorbo and a sexy, wet Lucy Lawless were available for sale, and not the product of an insane Hercules/Xena fan (although it is very fun to imagine that fan giving these out as Christmas gifts to his/her non-nerd family). But these things will send several different messages to your friends and family, none of which are flattering in the least. 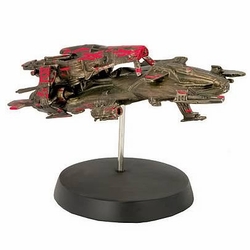 Bought exclusively by holiday-loving browncoats. Look, it’s one thing to have the trademark spaceship from the beloved, short-lived series Firefly, but this…this is another. In Firefly, the Reavers are freaky cannibalistic space savages. Keep that shit for Halloween. 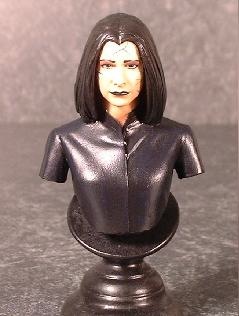 Unlike most of the ornaments on this list, we feel that nothing better exemplifies Christmas than the time on Buffy the Vampire Slayer when Willlow Rosenburg went batshit crazy and became a dark witch in order to avenge the murder of her lesbian lover and flay a dude alive (bonus: Willow was Jewish). We’re pretty sure the same plot was featured in one of those Peanuts specials. 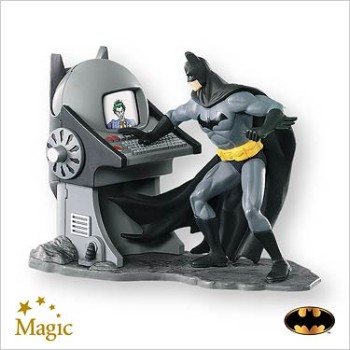 We don’t really expect Hallmark to know all the ins and outs of our favorite superheroes, which is why we’re cool with them releasing year after year of Spider-man and Superman in slightly different action poses. Sadly, we can’t fathom the reason behind this ’07 Batman ornament, which features the World’s Greatest Detective, uh…looking at his computer. “Hmm. A group of thugs in clown masks robbed a bank, left behind some playing cards, then headed to an abandoned theme park funhouse? I sure hope the Bat-computer can make sense of this random data and give me a suspect!”

This awesome Hallmark ornament of a classic Pac-Man arcade cabinet came out this season, and actually lights up and plays several authentic Pac sounds. Nerdy? Yes, but still cool enough for non-nerds to enjoy. So why is it on this list? Well, because at 4 ?-inches tall, it is the absolute perfect size for your Star Wars and G.I. Joe figure to play. Run by your local Hallmark and see if it’s still there, because Destro wants one in the Cobra rec room. 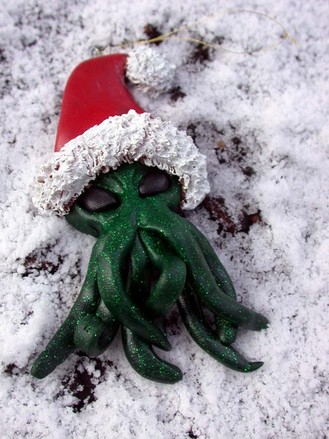 Admittedly, this is a hand-made ornaments from one of the wonderful craftketeers over at Etsy. But you can buy it here for money, and IT’S CTHULHU WEARING A SANTA HAT. Enough said. 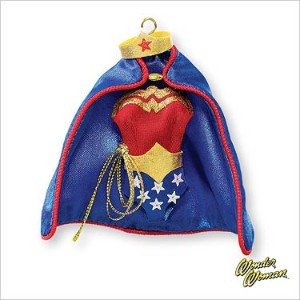 Hallmark has made several Superman and Batman ornaments, and maybe two Wonder Women. This would be sad even if one of those ornaments wasn’t this cloth rendition of her skimpy superheroine outfit without the superheroine inside. Fun fact: if you are a guy, you cannot own this ’07 Hallmark ornament and not be totally creepy. Sexist? Yes, but that’s the law. 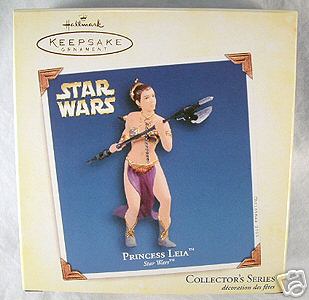 Some of you guys might be able to make a convincing case for hanging a mini-version of Wonder Woman’s skivvies on your tree, but there is no justification at all for owning a Slave Leia ornament other than the reason we all buy ridiculous Slave Leia merchandise, which is that we want to have sex with Carrie Fisher circa 1983 in a metal bikini. This is not an appropriate Christmas sentiment. 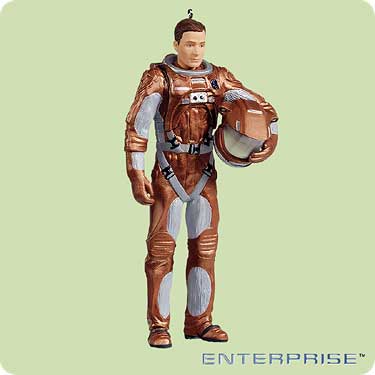 Hallmark has made many, many Star Trek ornaments over the years, some of which were genuinely fun and cool (this year’s Kirk in a pile of Tribbles comes to mind) and all of which were nerdy. But none was or could have ever possibly been more esoteric, needless and thus only for the insane nerd completist than this ’03 ornament of Trip Tucker, the stalwart engineer from Enterprise. Hang this on your tree, and it will be a real conversation starter among your holiday guests. Unfortunately, that conversation will really only be a short series of questions ending with “Who the fuck is Trip Tucker?”