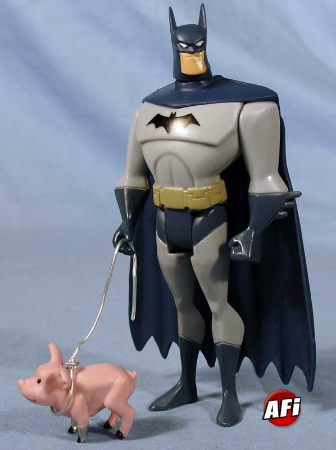 Make sure you stop by Target sometime soon? Why? Well, if you recall, they’ve locked down Mattel’s Justice League Unlimited line as a store exclusive, which has resulted in a lot of repackaged figures with new accessories, including the above two-pack that blows my mind. Is it Batman and a pig, you ask? Yes. Is the pig a Green Lantern from a pig planet? Good guess, but no–the pig is Wonder Woman.

I had totally forgotten about the JLU episode where Circe turns Wonder Woman into a pig, and Batman has to take care of her…which he does by putting her on a leash (he knows how to treat the ladies, that Batman). I also forgot how Batman gets Circe to release the spell, until I looked it up on YouTube:

You know Grant Morrison is pissed he didn’t think of it first. Order the toy here. (Via Great White Snark)