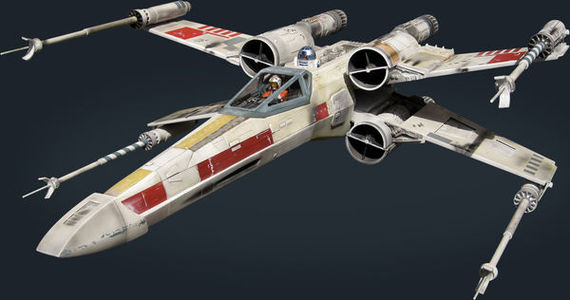 Before your explodes at what might appear to be an outrageously overpriced Star Wars toy, let me get you the facts–this is no Hasbro vehicle, it’s pretty much a recreation of the X-Wing models Lucas and crew used in Star Wars. It’s just under 2-feet long, so it’s not small, and here’s the stats, as per makers eFX Collectibles:

It’s going on sale tomorrow, and eFX has a convenient payment plan for those nerds wealthy enough to partake. At the very least, you should head over there to see the gallery of pics of the X-Wing, which do a much better job of showing off how badass this thing is. The X-Wing has always been my favorite Star Wars icon, so if I were incredibly rich–and still toiling on a nerd blog five days a week–I’d buy this sumbitch in a heartbeat.

What? The Dragonball movie trailer? No! I’m not stalling! It just makes my eyes bleed and makes me want to tear my own head off in despair, so it’s kind of tough to post. It’s coming. Really. I’m sure it’ll be up…shortly. (Via Gizmodo)