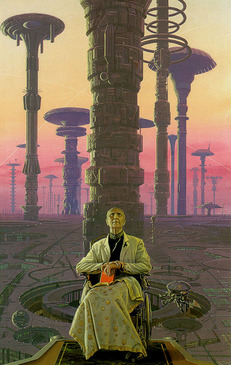 Sony just snagged the rights to Isaac Asimov’s beloved Foundation series, which most of us agree would make a terrible movie no matter what because it’s mostly talking and planning and the hero is an old guy named Hari Seldon who dies in the first ten minutes. However, Sony is making sure that the original book will be desecrated in every way, as they’ve hired Roland Emmerich to direct.

Roland Emmerich has directed these incredibly dumb, awful movies, some of which have admittedly made money: 10000 BC, The day After Tomorrow, The Patriot (which actually features Mel Gibson stabbing an evil British man to death seriously with the American flag after The Simpsons did it as a joke) and the American Godzilla, which managed to utterly fuck up a concept much, much simpler than Foundation. Also, he directed Independence Day, which I know some of you love but was still an incredibly stupid movie, thanks to the aliens’ spaceships running on Mac OS.

There is no one in Hollywood less equipped to handle the Foundation series than Emmerich, who specializes in imbecility. This is going to make I, Robot look like a faithful adaptation. It’s going to make Bicentennial Man look sharp and nuanced. And it’s going to make a steaming pile of shit look pretty damn good in comparison.