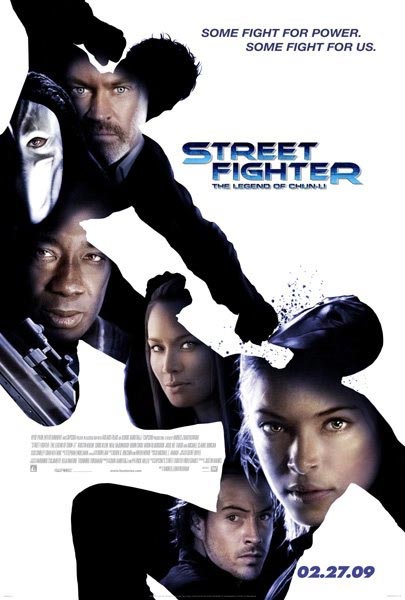 I’m sensing a problem here. First off, the Japanese trailer for the upcoming masterpiece Street Fighter: The Legend of Chun Li, barely featured Kristen Kreuk as Chun Li, and allowed her none of the speaking lines–not a strong vote of confidence. Now here’s the U.S. movie poster which features two people hitting each other–neither of which are Chun Li (you can tell by the lack of breasts). Even more worryingly, Kristen Kreuk’s head has been given near equal billing with Michael Clark Duncan’s head. I would contend this is not a good sign.

So you don’t have to be particularly intelligent to come to the realization that if you’ve gone out of your way to make a Chun Li-specific movie, the best way to advertise it might be WITH A FUCKING PICTURE OF CHUN LI. So the fact that this poster exists leads up to two conclusions: 1) the producers of this film are borderline retarded, or 2) there is some horrible  problem with showing Kristen Kreuk as Chun Li that the producer think have two random dudes punching each other might look more appealing. Either way, this looks to be shaping up to Dragonball-levels of misery.