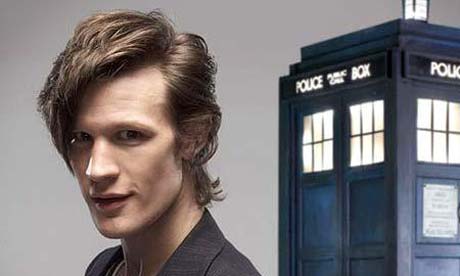 The 11th Doctor Who has been announced, and oy, he’s a young ‘un. Despite everyone’s theories–especially the consistent rumor that Paterson Joseph would be hired as the first black Doctor, the BBC revealed that Matt Smith–the 26-year-old with the goofy-ass haircut and lack of eyebrows up above–will be Who when David Tennant steps down after 2009. From the Guardian, home of the most ludicrous Batman 3 casting rumors, but reasonably spot on when they stick to Brit-land:

Doctor Who executive producer Steven Moffat said he knew he
had found his Doctor at the start of auditions. “The way he said the
lines, the way he looked, his hair. Everything was spot on,” he said,
praising Smith’s dynamism and swagger.

Whovians, too, were
impressed. “We think it is a great choice to have someone so young.
David Tennant was the most energetic Doctor ever, and you need somebody
with youth and energy to take that forward,” said Sebastian Brook,
editor of the drwho-online fan website.

But since you can’t print any news article in England without pretending it’s part of some massive controversy, there were a few charges of Time Lord racism:

But Matthew Sweet, cultural commentator and broadcaster, said: “The
idea of a black or woman Doctor is something we only seem to be able to
enjoy as a tease. When Tom Baker left, for example, there was
speculation about Joanna Lumley taking over. There is a little part of
me that’s disappointed the Obama effect hasn’t reached Gallifrey yet.”

Perhaps the Obama effect hasn’t reached Gallifrey yet because Gallifrey is made-up, Mr. Sweet. I loved your “Girlfriend” video, though.