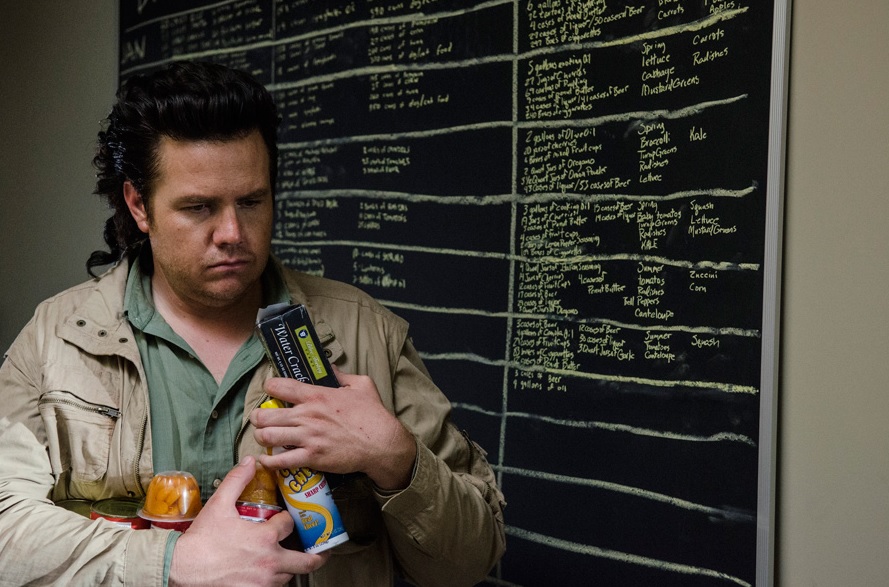 This week’s “Coral!” count: 0. Might be time to rethink your drinking game.

The minor spoiler version – using a split structure that shows a current timeline in color and events beforehand in black and white is an interesting device, and I’m glad they attempted something new. On the other hand, it made things feel a bit too much like Lost – after 6-8 weeks of watching a prequel show where we know how everything ends, I wanted the immediacy of the now. again. I also learned that massive CG hordes don’t look so good in black and white, and Andrew Lincoln looks like Frank Miller drew him.

Does anyone die? Yes.

Does it end on a cliffhanger? Of course.

Welcome back. Now for running commentary.

-Flashback Rick fades to black and white, then black, and then speechifyin’ again.

-Did somebody just do the Bill O’Reilly “Screw it, we’ll do it live!”

-Since I don’t know what the hell is going on, I assume we’re about to cut to a “15 hours earlier” title

-Flappy-Skin zombie is the only one with any color. It’s like the others are in the comic book still.

-Black and white gonna be a theme tonight. Somebody on staff liked the B/W rerun marathons. So at a guess, B/W is what happened immediately after the prior episode, and color stuff is later. Nicely avoids my title-card prediction, but same effect.

-Cue montage of characters I don’t remember half the names of. Oh hey, that’s “Tara.” Glad someone said it aloud.

-After the apocalypse, all that will be left are cockroaches and Eugene’s mullet.

-Quint materials company – for when you need to escape the jaws of death.

-Rick in black and white with his face covered in Band-Aids looks like he belongs in Sin City.

-Morgan is being confined because if you let him loose, people would confuse him for Morgan Free-man and expect him to narrate the whole thing.

-Eugene is literally the only mulleted, mentally challenged redneck who can look at a smart dreadlocked black man and say “It’s good to see someone like me”…then clarify he is referring to hair care.

-Where the hell is “Coral”?

-“You always think there’s one more peanut butter left.” Is that seriously going to be a thematic through-line?

-CGI zombie horde! In black and white, though. Lemming zombies!

-CGI horde demonstrates the importance of grayscale by its absence.

-Film school lesson – when they’re walking through the forest in black and white, you can tell where the background begins and the characters end, because many shades of gray, i.e. grayscale, are used. Whereas the CG horde does not use that many, and as such blurs together and looks like a hidden 3d illusion which needs to be stared deeply into.

-First person to make a Facebook meme comparing Deanna and Hillary Clinton gets no cookie, and a kick in the ass for being predictable. Just don’t make Rick into Donald Trump, because he’s the one saying a stronger wall WON’T really work.

-Looks like they’re getting some reuse out of the RV prop from the older episodes. Sell those building block sets!

-The wall makes an effective splitscreen, to metaphorically show the thin line between us and them, or something.

-A little gratuitous consolation gore in color is always welcome.

-Heath now has red on his ledger, so to speak.

–Halo 5 commercial laying a fucking sonic assault on my ears. Stop it.

-“In a work, work, work world, take the time for Sunday.” Er, no, commercial guy. I have to type this stuff.

-“looky-loos” is a surprisingly sweet word for zombies.

-“Grabbin’ the bull by the nutsack” – now that’s better. That’s our Abe.

-Does anyone actually want these webisodes set on a plane? I already saw Flight of the Living Dead: Outbreak on a Plane, and the best thing about it was how it ripped off two different movie titles in one.

-We are not yet done with flashbacks, it seems. Water crackers? Dude, those things suck.

-“Do you have any idea who you’re talking to?” Oh please, PLEASE follow that with, “I’M RICK GRIMES, BITCH!” Dammit.

-The zombies are moving about the speed of the Hall H line at Comic-Con. They also look as dispirited.

-“I wanted to kill him…I realized I didn’t have to do it” BECAUSE A GOLLUM ZOMBIE WILL DO IT FOR ME IN THE NEAR FUTURE. Way to do mercy.

-Chris Hardwick promo means the episode is nearly over. Because it’s running long it was hard to tell.

-“Hey Norman, here are your notes for this weeks show:

-It’s the Horn of Gondor! Boromir must be dying!

-Bad CG composite is bad. And where the hell was CORAL this whole time?