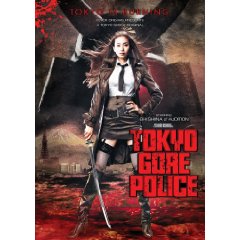 Jesus. I thought I’d seen some bad DVD Days before, but when Reba: Season 5 is the second best-selling DVD release of the day, you know you’re in for slim pickings.

? Tokyo Gore Police
I don’t know much about this movie, but I like the cover, and it has a “Very Long Wait” on Netflix. Here’s the synopsis:

In the near future, the Tokyo Police Corporation is locked in a bloody
war with the “engineers.” These genetically modified super-criminals
can bio-fuse their open wounds with weapons, turning self-mutilation
into a combat form. Ruka, the daughter of the police chief’s murdered
right-hand man, is now the top engineer hunter. With cold-blooded
efficiency she cuts through the psychotic engineers and tracks down
their home base, a truly bizarre fetish club. Nothing keeps her from
her sworn duty, even when she finds out the truth behind her father’s
death.

I like how she’s wearing stocking and leather books and a miniskirt and a tie. Didn’t want to miss a fetish!

? Stargate: The Ark of Truth
In Blu-ray. I have nothing to say about this film, except I was under the impression Julian Sand died like a decade ago. Weird.

? Supercop
Jackie Chan movies can be very good or very bad, but Supercop is definitely one of the good ones. Plus, it’s put out by Dragon Dynasty, which is an excellent, excellent series–I hope to god they get around to releasing John Woo’s The Killer like they did with Hard Boiled. Daddy needs to see Chow Yun-Fat in anamorphic widescreen, please!