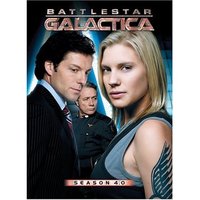 Sorry for missing the last two DVD Days, but really, virtually nothing came out other than that weird Resident Evil: Degeneration CG flick. The studios have clearly been saving their good stuff for after the new year, including…

? Battlestar Galactica Season 4.0
I could point out this is when they find Earth, but I’d rather point out that Apollo is clearly staring at Starbuck’s rack on the DVD cover.

? Frisky Dingo Season Two
The one, the only. Its cover is pretty spectacular as well.

? Babylon A.D.
The Vin Diesel sci-fi flick roundly denounced by its own director. It currently has 1-star on Amazon, which is impressive in its own way.

? Transformers Animated Season 2
I have no information on this set, and no inclination to get any.

? Duckman Seasons 3 & 4
I’m all well and pleased Duckman is out, but where the hell is my last Tick set? Goddammit.

? Gurren Lagann Part 2
Anime death watch: Gurren Lagann is a great show. It was on Sci-Fi Channel. It was made by Gainax, of Evangelion fame. It has many, many fans in America. It is absolutely one of the top anime series in the U.S. Currently, this reasonably priced box set is selling slightly less than the DVD of the PBS special A Ride Along the Lincoln Highway. Wow.

? Postal: Unrated Director’s Cut
Uwe Boll’s latest movie apparently had a few brief moments of non-awfulness. So wouldn’t his director’s cut just be him making those scenes as terrible as he originally intended?