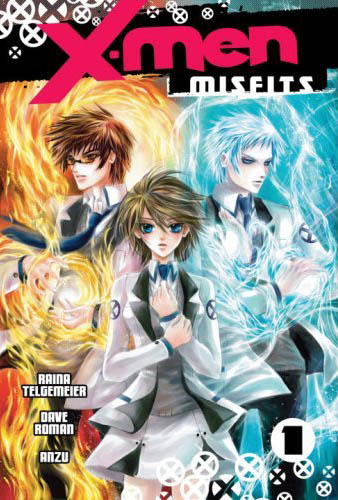 Remember that Marvel/Del Rey joint X-Men manga collaboration thingamabob dealio that was announced many, many months ago? No? Neither did I, until Robot 6 found the cover to X-Men: Misfits, the result of their unnatural coupling. It looks…like some generic shojo manga, really, which is more or less what I was expecting.

I still don’t know what Marvel and Del Rey and whoever decides to pump out manga versions of American properties are thinking when they do this shit. First of all, no regular X-Men fan is going to buy this, because it looks super girly (and it is, it’s a shojo manga), it doesn’t appear to have any regular X-Men characters in it anyways, and besides, they have several dozen other X-titles to buy each month. As for the shojo fans, I have to believe they’d rather spend their money on authentic shojo manga, like Fruits Basket or Nana or The Wallflower (which, by the way, is stupendous. I own every volume). Sure, at least Anzu is a Japanese artist, but she’s not exactly top-tier, and virtually every manga fan I’ve ever met would rather buy authentically Japanese written manga, instead of stories penned by gaijin.

I’m sure there will be a few kids who buy it. But there’s a reason why so many comic companies have tried to do this about a dozen times over the last decade and never succeeded. I think Misfits ends up being a pretty accurate title.