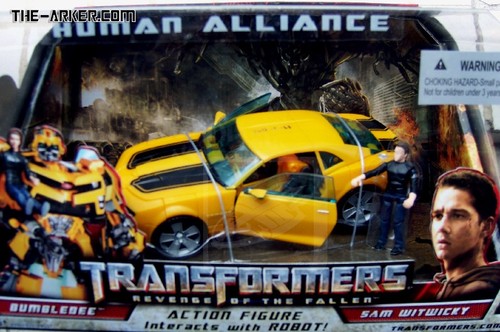 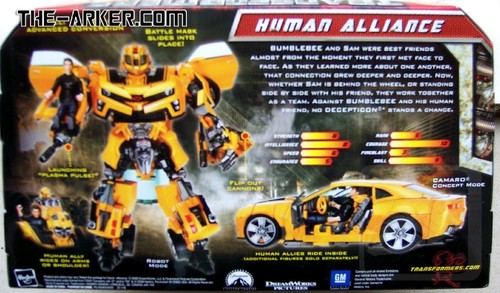 I hope none of you are pissed, but I don’t consider the fact that Bumblebee and Shia the Beef (long time since I’ve mentioned him) are going to be in Transformers 2: Revenge of the Fallen as spoilers. And I also don’t consider Bumblebee’s new robot mode a spoiler as much as I consider it good news. Coupled with the RotF Optimus Prime figure from a few weeks ago, it looks like Hasbro has convinced Bay to let the ‘Formers’ robot modes look slightly like their vehicle modes, which not only makes them more identifiable, but is a pleasant nod to the fans, who will be the ones shelling out the millions of dollars to see this thing.

Actually, what I’m actually most impressed with is the fact that Bumblebee comes with a Shia figure which actually fits into his driver’s seat. Are there any other Transformers toys with that feature, or is this the first? I’m guessing there had to be, but I have no idea what it would have been. Also, leaving the Beef inside the car while Bumblebee transforms clearly would result in Shia gruesome death by crushing, which is also kind of awesome in its own right. (Via 16bit)