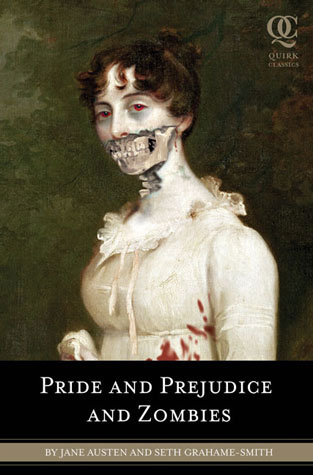 If you have a list of “Things That Are Unbelievably Awesome,” I’d suggest putting this book immediately on it. Please read this summary and try not to have your skull explode is pure delight:

Pride and Prejudice and Zombies features the original text of Jane Austen’s beloved novel with all-new scenes of bone-crunching zombie action. As our story opens, a mysterious plague has fallen upon the quiet English village of Meryton–and the dead are returning to life! Feisty heroine Elizabeth Bennet is determined to wipe out the zombie menace, but she’s soon distracted by the arrival of the haughty and arrogant Mr. Darcy. What ensues is a delightful comedy of manners with plenty of civilized sparring between the two young lovers–and even more violent sparring on the blood-soaked battlefield as Elizabeth wages war against hordes of flesh-eating undead. Complete with 20 illustrations in the style of C. E. Brock (the original illustrator of Pride and Prejudice), this insanely funny expanded edition will introduce Jane Austen’s classic novel to new legions of fans.

I…I didn’t make it. My brains have covered my monitor. So with my few remaining synapses, let me tell you that the book is due on May 13th, by Jane Austen and Seth Grahame-Smith. My eternal thanks to Thewalkingdude for the tip.