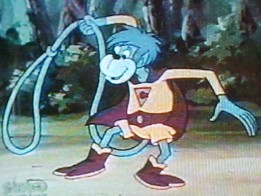 If last summer’s movie ticket sales have shown anything, it’s that superheroes are popular enough to be enjoyed by more than just children and nerds. We are finally at a point where Hollywood is taking superheroes seriously–but there was a time not long ago when soulless executives thought that the wee children couldn’t handle a pure superhero tale, and made sure to include a goofy sidekick character with every superhero cartoon. These executives could not have been more wrong, and we hope they’re all dead now. A few of these unnecessary characters were reasonably harmless to their series, although none of them were actually funny. Some were terrible, dumbing down the show far past the point execs thought the cartoons had already dumbed down the show (cartoon makers assumed children were gibbering idiots in the ’70s and ’80s, who would shove a toothbrush up our nose and straight into our brain unless told otherwise by our cartoon heroes). And then some of these sidekicks can be used to prove that there is no God, as no loving God would ever have let innocent children suffer through the horror of their mincing antics and rampant imbecility. Here are those 10.

When Sandy Frank Productions brought the fantastic Japanese cartoon series Gatchaman to U.S. screens as Battle of the Planets, Frank made a few changes–he gave the five psychotic teens who dressed like birds American names, turned the gender-switching Zoltar into an evil brother and sister team, and cut out virtually all of the violence. But the most glaring addition was the series’ new narrator, a robot who appeared not once in the original, which you might have figured out since he wasn’t even animated. 7-Zark-7 was designed solely to rip off the lovable R2-D2 in the recent blockbuster Star Wars. The robot rarely moved, and yet his screen time exactly equaled the running time of all the cool violence left on the cutting room floor. And did we mention he had a robot puppy?

9) Orko from Masters of the Universe

Filmation had a bad habit of saddling their action series with comic relief characters, and their most famous was Orko, the effeminate pixie-like magician who made life hard for He-Man and the other Masters of the Universe. While Orko’s spirit was willing, he was a terrible screw-up whose spells invariable turned He-Man into stone or warped Man-at-Arms to another dimension, taking valuable time away from Skeletor’s ass. However, he very occasionally saved the day, when means he’s not as bad as many of the other fuck-ups on this list. Plus, since he never showed his face, we could pretend he looked like a Lovecraft beastie under than hat.

Of the two horrible, worthless kids that followed the Superfriends around in 1973, Wendy was the more tolerable of the two mostly because she filled her days yelling at Marvin. Marvin was just a mess, a deadly combination of whiny, boastful and immature that endeared him to no one, not the audience, and not the Superfriends (one imagines that the Bruce Timm-era Justice League would launch him into an air lock). The Superfriends themselves were watered down enough without this punk making them suck worse. Thankfully, Hanna Barbera decided to retool the series a few years later and Marvin (along with poor Wendy) went away to that remote prison they sent Chuck Cunningham.

7) Needle from Conan the Adventurer

Robert E. Howard’s Conan isn’t exactly the first thing that comes to mind when you think “kid’s show” but that’s exactly what he got in the early ’90s. Of course, they had to take out 90% of the stuff that made conan interesting, especially the killing and the sex, resulting in very little. Conan was no longer a barbarian thief out for his own gain but a noble adventurer, and adding insult to injury he was saddled with a talking bird sidekick named Needle. Needle’s sole role in the series was to get captured and teach kids how annoying it was to speak in the third person. The real Conan would have pieces of Needle in his stool several hours after he met him.

Somebody decided that the second season of Plastic Man needed a baby; one assumes this person was in fact Satan. So Plastic Man’s gal Penny had a kid (one assumed they got married during her third trimester), and Baby Plas was born, a tot so awful he didn’t even get a real name from his parents. Baby Plas was to Plastic Man what Scrappy was to Scoopy Doo–an obnoxious minature copy of the title character who fulfilled none of the functions. His lame antics turned a whimsical adventure series into an unwatchable cartoon atrocity. It also didn’t help that his appearance frightened small children.

5) Bat Mite from The New Adventures of Batman

Filmation decided to base their 1977 Batman series on the goofier science fiction tales of the 1950s Batman–a terrible idea in retrospect, but you can imagine them having the best intentions. and yet, only beings of utter malevolence would make a Batman cartoon, and decide to add Bat-Mite–IN EVERY GODDAMN EPISODE. Yes, Bat-Mite was Batman’s Mr. Mxyzptlk, an annoying imp who considered himself Batman’s biggest fan and would just fuck up whatever adventure Batman and Robin happened to be on. He was intolerable whenever he appeared in the comics or previous cartoons, but he only showed up occasionally. In The New Adventurers of Batman, he WAS IN EVERY GODDAMN EPISODE. The only saving grace for Batmite was that the dynamic duo also hated him and took every opportunity each episode to tell him that.

4) Newton from The Adventures of Hercules

The 1960s Translux Hercules cartoon had a lot of cool things going for it including a killer theme song and some terrific designs that admittedly made Herc look a lot like a certain Kryptonian. However, nothing could make one forget the horror of Newton, the annoying transgender centaur sidekick to the bastard son of Zeus. Newton was not only horrifically apple-faced (picture Kenneth from 30 Rock, but with a horse’s body) but he said everything twice! Shut up and die! Shut up and die!

When Hanna Barbera retooled Superfriends, they replaced the awful Wendy and Marvin with the Wonder Twins Zan and Jayna-this wasn’t as good as having no sidekicks at all, but at least they had superpowers and didn’t bi
tch all the time. Unfortunately, the same cannot be said for their purple “space monkey” Gleek, whose sole purpose to provide a lame banana joke at the end of every episode. He had no powers. He was simply purple. He did occasionally bring a bucket to keep Zan in, which is the only reason he’s at #3.

2) H.E.R.B.I.E the Robot from Fantastic Four

For the late ’70s Fantastic Four animated series, kids were deprived of the Human Torch. animators DePatie-Freleng said this was because they didn’t want kids to imitate the Torch and set themselves on fire–but the real problem was that the Torch was licensed to someone else. Instead, kids got a flying R2-D2 knock-off with the second worst voice in cartoons (see below). That’s right, instead of a dude who could turn into fire,  we had to see a robot with no special powers other than an incredible sense of self-entitlement…and a gut. The result was that the Fantastic Four was really the Fantastic Three Plus a Smarmy, Useless Robot.The regrettable series ended luckily after one season but H.E.R.B.I.E (I don’t know or care what that stands for) has inexplicable continued to pop up in the Marvel Universe over the years. Honestly, more kids set themselves on fire after having watched H.E.R.B.I.E. than ever would have if the Human Torch had appeared.

If you take all the most annoying characteristics from all the other characters in this list, you might well come up with Snarf, the feline sidekick to the already feline Thundercats. He was hideous to look at. He served no plot function other than to fuck things up for the heroes. He was supposed to be comic relief, and yet was utterly unfunny. He had no useful attributes to justify hanging around the heroes. And yet, more than any one of these hideous attributes, Snarf will always be remembered for saying “Snarf SNARF snarf snarf SNAAAAAAARF!” between every single fucking of dialogue he ever got…and he got a shameful amount of dialogue. Every frame Snarf was on screen in Thundercats was a miniature lifetime of pain, visually, audibly and conceptually. Snarf made Orko look like He-Man. Snarf rhymes with barf. Snarf. Snarf. SNARRRRRRRFFFF