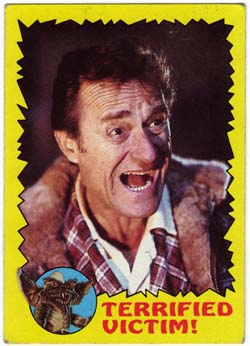 It made sense that Bruce Campbell played Elvis in Bubba Ho-Tep,  because his fans are an enthusiastic cult rivaling that of the late, great King of Rock and Roll’s. But much like a handicapped relative at Christmas, Campbell tends to hog the spotlight. You see, there are a ton of great character actors who have made careers out of playing “that guy” in genre films. Just because these folks have never donned an S-Mart shirt doesn’t mean they are any less worthy of your awkward praise when you corner them at conventions. So take a break from dusting the thousand different Evil Dead 2 DVDs you own and give some love to these unsung thespians. 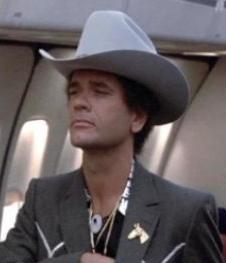 Where You Know Him From: The Howling, Innerspace, China Beach, his portrayal of Coach Cutlip on The Wonder Years, the voice of the Johnny Cab in Total Recall, Gremlins 2: The New Batch, Star Trek: Voyager, Stargate: Atlantis.
Why He’s Awesome: Long before he landed a steady paycheck on Voyager, Picardo portrayed a variety of sleazy characters as one of Joe Dante’s stock players. Equally adept at playing it straight  (his sinister appearance in The Howling) or going for the big laughs (check out his performance as the Cowboy in Innerspace), Picardo somehow makes asshole characters seem downright lovable. And don’t pretend that your heart wasn’t warmed when his Forster character found true love in the arms of a green beauty at the end of Gremlins 2.
Star Trek Connection: Along with playing the Doctor on Voyager, he reprised the role for a cameo in Star Trek: First Contact and appeared as the hologram’s creator on Star Trek: Deep Space Nine.

Where You Know Him From: The Fog, Escape from New York, Creepshow, Halloween III: Season of the Witch, Night of the Creeps, Lethal Weapon.
Why He’s Awesome: Isn’t the porn ‘stache he sports in the above clip reason enough to love him? A true everyman, Atkins has made a career of playing sympathetic figures who are usually caught up in circumstances that force them to rise to the occasion. He may not have the looks of a Tom Selleck or a Gabe Kaplan, but Atkins rugged persona helped make audiences say “oh yeah, I’ve seen that guy before” in flicks throughout the 1980s. Here’s hoping his appearance in the upcoming My Bloody Valentine 3-D will usher in a wave of Atkinsmania!
Star Trek Connection: Once performed the Heimlich on George Takei. Maybe. We’ve heard rumors.

Where You Know Him From: Candyman. Candyman. Candyman. Candyman. Candyman. Oh crap.
Why He’s Awesome: What they call in show business a “gentle giant,” the 6’5″ Tony Todd has acted in blockbusters (Platoon) and z-grade thrillers (Shadow Puppets, anyone?) alike in his nearly 25-year career. Regardless of how small the budget or role, Todd always manages to inject a bit of class and dignity into his characters. Which is no small feat for an actor whose best-known role is that of a hook-handed killer with a tragic past.
Star Trek Connection: Todd portrayed Worf’s brother Kurn on Star Trek: The Next Generation and on Deep Space Nine, where also played an elderly Jake Sisco on the episode “The Visitor,” widely considered one of the series’ best installments. He also did two episodes of Voyager. But that show was horrible, even if Bobby Picardo kicked some ass on it.

Where You Know Him From: Deliverance, Beverly Hills Cop, Beverly Hills Cop II, RoboCop, Total Recall.
Why He’s Awesome: He had to kill Bob Morton because he made a mistake, then it was time to erase that mistake. Later, he refused to give Martian mutants “de’re ayrrrre.” Ronny Cox hasn’t been in many flicks that regular Topless Robot readers may care/obsess about, but his ruthless turns as Dick Jones and Vilos Cohaagen in RoboCop and Total Recall respectively earn him a spot on this list. One of the biggest missed opportunities in the history of cinema is that Paul Verhoeven never got to complete his asshole villain hat trick and give Cox a third role in one of his films. But better that than have him in Starship Troopers, I suppose.
Star Trek Connection: He was the tough-as-nails Captain Edward Jellico on the Star Trek: The Next Generation two-parter “Chain of Command.” Cox’s character is apparently also the only person in Starfleet who sees Counselor Troi for the utter waste that she is.

Where You Know Him From: Re-Animator, Bride of Re-Animator, Beyond Re-Animator, Abominable.
Why He’s Awesome:: If My Name Is Bruce left you Campbell freaks cold, maybe it’s time to turn your fanaticism to Jeffrey Combs. After all, both actors are primarily known for one role (in Combs’ case, the maniacal Dr. Herbert West in the Re-Animator flicks), as well as for their reported kindness towards fans and shared love of the horror genre. All that aside, he’s also the best actor to play smarmy roles this side of William Atherton. Combs may not have lots of merchandise bearing his image on sale in Hot Topic, but he probably has some damn fine Nana Visitor anecdotes.
Star Trek Connection: After being rejected for the role of William Riker, Jeffrey Combs went on to become a semi-regular on Deep Space Nine as the Ferengi, Brunt, and the scheming Vorta, Weyoun, during the series’ final seasons. When DS9 left the air, he jumped over to do a guest spot on Voyager before landing a recurring role as the Andorian commander Thy’lek Shran on Enterprise. His welcome presence on that show almost made it watchable, though still not quite.

Where You Know Him From: The Terminator, Aliens, Near Dark, his role as Frank Black on Millennium, endless Bigfoot-related movies, etc.
Why He’s Awesome: I’ve previously mentioned my love of all things Lance on the site before here, but it bears repeating that Henriksen is such a method actor that he undergoes a rigorous preparation period before filming each role. Did you know that when he was prepping to portray Bishop in Aliens that he actually snuck into Area 51 to see the otherworldly beasties that the government had intercepted over the years? Or  that he figured out how to turn his body into a  sportscar for his voiceover work as Lockdown in the recent Transformers cartoon? Okay, I’m making these examples up. But he did walk around Los Angeles with tinfoil on his teeth to imitate a robot when it looked like James Cameron was going to cast him as The Terminator. And I still can’t wrap my mind around how incredible that is.
Star Trek Connection:
He had to audition for the part of Data, right? If not, then Captain Archer on Enterprise? Actually, Lance has no real link to the franchise, but he can regularly be seen at genre conventions alongside of Trek actors.

Where You Know Him From: A Bucket of Blood, Truck Turner, Rock ‘n’ Roll High School, The Howling, V: The Final Battle, Gremlins, Chopping Mall, the Fame TV series, Innerspace, The ‘Burbs, Gremlins 2: The New Batch, his deleted Pulp Fiction scene as Monster Joe, Small Soldiers, and countless other film and TV appearances.
Why He’s Awesome: Dick Miller is the definitive character actor. He has been working steadily since 1955, and throughout the years has made a name of himself for playing people just like you–albeit a bit more gruff. After earning early notice through his work in various Roger Corman productions (including the underrated dark comedy A Bucket of Blood, featured above), he befriended Joe Dante, who made a point to create a role for him in most of his films. The general public may not know his name, but his relative anonymity has allowed him to pursue the sort of roles that interest him. And for over 50 years, it’s been our pleasure to watch the results.
Star Trek Connection: Guest starred on Star Trek: The Next Generation as a curmudgeonly newspaper vendor on the holodeck, and on the two-part Star Trek: Deep Space Nine episode “Past Tense” as a curmudgeonly policeman.