Mario. Last name: Mario. The videogame icon among videogame icons. He pretty much single-handedly won the console wars for Nintendo back in the ’80s and ’90s, thanks to a plethora of awesome games during the NES and SNES eras. This small Italian plumber has sold more videogames than any other person, real or fictional. Nowadays, Mario might not print money at the same rate he used to, but a new Super Mario game is always a massive gaming event. Yet, all that Mario touches is certainly not gold–in fact, at the height of his fame, ol’ Mario Mario was known to whore his likeness out to anyone with a buck and a cartridge, no matter how terrible the game was. Here’s the eight most egregious examples.

8) Any of the Mario Party Games

The Mario Party games are intensely popular, there’s no use denying that — I believe they’re up to Mario Party 47 or something like that. This can be attributed solely to the popularity of Mario, but the Mario Party games are uniformly terrible. Any board game has an element of luck in it, but with Mario Party, it only has luck. The game randomly decides to wins and who loses, and no amount of skill during the games changes that in the tiniest degree. You might as well play a game of “See who rolls the highest number on
the pair of dice” that way it’s over quickly and you can spend time
doing a quality activity like getting really drunk. I guess this is good if you are with a bunch of people you don’t really like so you can get together and all find a common enemy to hate instead of each other. If this game had no Mario characters in it, would anyone buy it at all? Answer: no.

During one of the gazillion times Princess Peach gets kidnapped, a clearly bored Mario decides to shake things up — for some reason, Mario decides that the best way to save the ever-kidnapped Princess Peach from Bowser is that he should use a machine to make him spherical and bounce around like a pinball. I can only assume he was bored with his standard running and jumping on things plan. Actually, this game shows proof positive that Mario’s old ways are best, as this game is stupidly difficult; how many of your balls will fruitlessly be knocked into the playing field only to be instantly shot back between your flippers? That depends on how long you can hold out before you throw your Game Boy Advance against the wall.

Hey, let’s play a Mario game except instead of having fun punching blocks and stomping on turtles, let’s type! Wait a second…that’s no game at all! Yes, this 1991 program duped poor, typing-challenged kids into learning a useful skill by emblazoned the famed plumber on it.  Even the title screen image has Peach, Luigi and Toad running away in horror from Mario, because they know learning how to type sucks. 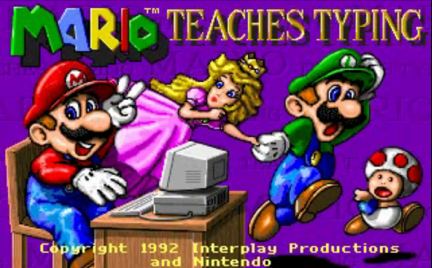 Also, why is someone who speaks in broken English and says things like It’s-a Me, Mario!” allowed to teach anyone about anything relating to English? Also, how does he type with those gloves on?

The shittiness of the Atari 2600’s graphic were never quite so evident as when Nintendo brought the original Mario Bros. arcade game to the console. The pipes are rendered as blocks, the coins are blocks, the POW block, it is flat and yellow like some sort of frozen urine block. The sound is like hearing a television die with a thousand rats inside of it. The constant static sound of Mario’s footfalls is sure to drive anyone to contemplate either throwing their Atari against the wall or throwing themselves off a building. Even worse than playing this game is this is the commercial for it, where they not only mislead you with the Atari 5200 graphics for the game, but an upbeat, jolly song that makes you think this game is actually a wacky fun time, instead of like being chased by an angry turtle, covered in feces, gunning for your face.

A Mario game that lets you know right up front that Mario will not be in it is like a Marx Brothers movie titled “Just Zeppo!” So Mario’s less charismatic brother Luigi gets the spotlight for the first time, which explains why he didn’t get another chance until Luigi’s Mansion for the GameCube. Anyway, Luigi has to go around a “city” stepping on Koopas to retrieve pieces of landmarks. That’s right, landmarks. Then he has to go return the pieces of the landmark, answer three questions about the landmark, and you don’t really care. It’s supposed to be educational, which means that it should have a label on it that reads “This game is not only Educational, but features Luigi and no Mario and is about as fun as stabbing yourself in the eye. The only lesson…is pain.”

Take all the fun of filling out blank forms, waiting, and getting absolutely no reward for it and you have  this game, which should have been titled Mario’s Department of Motor Vehicles. This “game” requires you to fill out blanks in a pages-long bio about a historical figure from a very slow multiple-choice menu, then input them into an ultra-slow time machine, then go through a very messed up acid-trip water-gliding section, then return whatever crap thing to the historical figure to get some boring dialogue and a wish to blow your own brains out. It teaches kids a valuable lesson that history is boring, and your parents clearly hate you if they bought you this game.

Those who were unfortunate enough to stick their faces into a Virtual Boy, Nintendo’s horribly misguided attempt to create a 3-D game platform, may have played this Mario game at one time or another shortly before they had to wrench their heads away from eyestrain. Essentially, it’s Mario Bros. with really slushy controls and three dimensions. Well, not really three dimensions…it’s more like two and a quarter very annoying dimensions. For instance, to destroy an enemy, you can throw a shell from one platform to another, hit the enemy, then jump through a tube so you can get to that other platform and kick the incapacitated enemy off. Except of course, the whole thing is “Three Dimensional” so one platform appears to be really close to you and one appears to be in the background. Adding to the fun is that the game, even without the eyestrain from the Virtual Boy’s patented torture goggles?, is really difficult. If it’s any consolation, if you owned this, it almost certainly ended up as a pile of melted plastic after the Gamestop you returned it to in frustration couldn’t sell it and set it on fire in a big pile with the rest of the unsold Virtual Boys.

So due to a legal issue over the Super Nintendo’s legendarily non-made CD add-on, Philips gained the license to use Nintendo characters for a few games for its CD-I  console. Philips did the remarkable job of turning this golden opportunity into straw buried in cow vomit. The objective of this game is to close doors before time runs out. That’s it. There’s no real logic as to why they have to do this, but it has something to do with Koopalings opening hotels. So, apparently if you close all the doors on a hotel, it destroys it. Sounds like something you would pay fifty dollars to play, right? Wait, there’s more! Thanks to the magic of CD-ROM, there’s full motion animation on it that allows you to see Mario and Luigi talk. If there’s anything nobody needs at any time, at any place, throughout history, is to hear Mario and Luigi talk. The animation doesn’t even manage to move what horrible excuse for the story is along. It just shows how you move from one stupid area to another stupid area while failing to save the princess. But hey! at least all those hotel doors got closed!