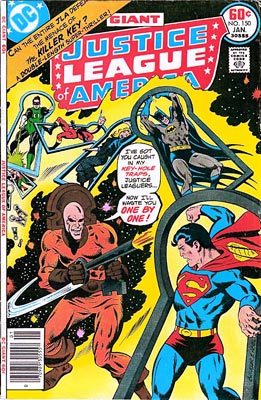 Both the Iron Man and The Dark Knight movies made a shit-ton of money in 2008. What was the difference between them? Marvel had a plan, and Warner Bros./DC didn’t. While Marvel’s assembling an Avengers onslaught of films that will likely have them rolling in money through 2015, DC has nothing but vague ideas and heads up asses. So perhaps it’s a good thing that Warner has put all live-action DC films on hold until they figure out what the hell they’re doing, according to director/screenwriter David S. Goyer via IESB.

This means the long-rumored Green Lantern, Wonder Woman, Supermax, the next Superman flick and whatever other big ones they once said they had coming down the pike, but assumably not Jonah Hex, who is likely to niche to count in the eyes of Warner and not Batman 3, which is still too ethereal at this point to exist and unlikely to be fucked with my anyone, having recently made a billion jillion dollars.

Whether Warner’s pause is a good thing or a bad thing depends on whether you think they have the ability to make a plan at all. Frankly, I have grave doubts as to their ability to do what Marvel’s done. Mostly because they’ve not done it yet (they’ve had all of 2008 to get their shit together, and have refused) and because DC is subordinate to Warner. See, Marvel set up its own studio, owns the characters and can call the shot, thus adding Robert Downey Jr. to the Hulk movie. DC has nothing, and has to do what a bunch of idiot executives who know nothing about the characters, the property, the fans or the culture say, which is how you end up with Superman, Super-Deadbeat Dad. I’m not optimistic.

In news that might produce an actual product, Robot 6 (home of the swell ex- [email protected] Newsarama guys) noticed that on the animated Wonder Woman DVD packaging, it’s says there’ll be a first look at the Green Lantern animated DVD movie. Which means the next animated DVD movie will be Green Lantern. I hope to god it’s Kyle Rayner or at least some of the Geoff Johns stuff, because I already suffered through Hal Jordan’s boring-ass origin in The New Frontier. I have no desire to watch that again.