A few notes before we begin today’s adventure. As my loyal Twitter Robots (Topless Twitterers? Whatever) know, I found what must be in the running for the world’s most horrible Fan Fiction story, a Pok?mon tale so perverse and awful it made “The Rewards of Little Girls” look like a Richard Scarry book. This is not that story. That story was too horrible to run. So instead, you get this other Pok?mon tale, in which James of Team Rocket gets raped by his boss Giovanni.

James doesn’t talk about it much – or at all, if he can help it – hiding
everything behind his over the top cheerfulness, his melodrama and his
particular brand of near-insanity.

He barely even mentions it to Jessie, and then only when she has
specifically asked him. Meowth, of course, knows nothing, being
relatively new to the outfit – and if James has his way, the
smart-mouthed Pokemon would never know about it.

The only time the subject is ever brought up, is when they make one of their semi-regular trips to Head Quarters.

The call comes as they are preparing to settle in for the night. James
tenses immediately and Jessie pulls him into a warm embrace. As she
tightens her hold on him, she reaches up and whispers in his ear, “I’ll
wait for you.”

Yes, contrary to popular belief, Team Rocket does have a boss. That’s who they’re trying to steal Pikachu for. But apparently, James’ part of their check-in process is far more thorough than Jesse’s.

The man stands, towering over him and runs a surprisingly gentle
knuckle down his cheek. Tracing the memory of tear tracks – he’d seen
them often enough. James schooled himself against flinching away, it
was always worse if he did.

It had. Almost long enough for the nightmares to calm down, become the
formless things they were before. Before. Before the attacks became so…

So what? Find out after the jump.

James blinked, stiffening slightly as a tongue trailed along his jaw.
He hated this. Gods he hated this. But Giovanni owned him. Owned him in
such ways that he couldn’t dare to even think about one day being free.

The fist connected with his stomach with such surprising speed that he
had no time to react, no time to steel himself. He dropped to the
floor, gasping, wheezing, clutching at his abdomen, mindless of the
scrapes to his knees.

Shaking, dry-retching, James climbed to his feet and complied, removing
his clothing as quickly, efficiently as possible. Once naked, he stood
shivering, clutching his stomach and looking at the floor. Giovanni’s
gaze trailed his form, pausing slightly at the scars and marks left
from the previous attacks, reminders normally left hidden by the
uniform. A smirk played about his lips.

As the large square hands touched him, moved him, scarred him, James
shut himself off. It was a while before the larger man decided he had
had enough of beating him; nearly an hour, James guessed. He lay on the
floor, panting, curled into the foetal position, silently cataloguing
the various injuries he had sustained.

They were mostly superficial. Plenty of bruises, one cracked rib, bite
marks on his shoulders, scratches, scrapes, a solitary burn on his
thigh and one single broken toe. Nothing above his neck. Giovanni
either liked his face, or didn’t want rumours. James believed it was a
little of both.

There was that hint of lust to the man’s voice. It was that hint that
scared James more than the beating did. He was sitting at his desk once
more, but turned away from it. His legs spread, trousers undone at the
crotch. James knew what he wanted.

He made it to his knees and crawled over, watching his employers face,
quaking slightly at the large smile. He positioned himself between the
spread legs and without direction, freed the straining erection.

There was a sigh above him as he handled the organ. It wasn’t
particularly impressive. Slightly above average, with a girth most
lovers would enjoy. Uncut, bulging veins and a velvety smooth head. In
any other situation, if it had belonged to any other man, James would
have enjoyed pleasuring it.

As it was, he simply went through the motions. By now, he had learned
what Giovanni liked. A little hint of teeth, lots of tongue, wet. He
took the organ in his mouth, tonguing, lapping at the solid heat. He
had once thought to bite it off and nearly did, a long time ago.
Giovanni had taught him a lesson that stayed with him. So, however much
he hated this, he did it.

In case you didn’t know, Giovanni has appeared in Pok?mon. He looks like this: 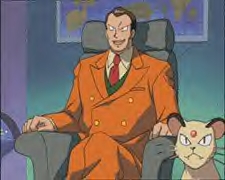 That way you can visuallize who James is being mouth-raped by. After all, knowing is half the battle!

Giovanni bent him over the desk, pushing his head down into the leather
covered surface, spread his cheeks with the other hand and entered him
– without preparation, without lubrication, without a care for the pain
he inflicted.

James bit down on his own wrist to stifle his cries, closing his eyes
and holding on to the desk with white knuckled fingers. Giovanni took
him roughly, with deep, hard thrusts. Grunting with effort, his free
hand roamed James’ body until finally settling on his limp penis.

Teeth scraped over James’ ear, bit into his shoulder and he tried. He
tried to imagine what doing this with someone he loved, or at least
liked, would be like. But Giovanni had ruined the sex act for him and
he couldn’t do it. But it didn’t matter, the mans groping had created
the desired effect and James hoped it would be enough.

Frankly, I applaud the author’s restraint in not terming either characters’ testicles “pok?balls.” Suffice to say, Giovanni rapes James to his satisfaction, and dismisses him for the evening. James returns to his room.

James shook his head and moved into the bathroom, quietly closing and
locking the door behind him. He stripped in silence and stepped into
the shower, turning the heat up until it was nearly scalding. He
scrubbed his body three times over, removing every trace and then some
of Giovanni’s touch.

He emptied his body and cleaned inside as much as he could, checking
for tears. Only a handful. By morning they would have started healing.
He was unsurprised by the amount of blood washed down the plug-hole.

So…yeah. Feel free to read the whole thing here. And if you’re at all disturbed by the graphic representation of half of Team Rocket gets physically and sexually abused, I’ll have you know that this doesn’t even affect me in the slightly. That’s how bad the other story was. And frankly, I’m jealous that James can wash even a little of his trauma away in the shower, because I’ve had five showers, AND I’M STILL SO DIRTY UNCLEAN UNCLEAN NOTHING WILL EVER BE RIGHT AGAIN