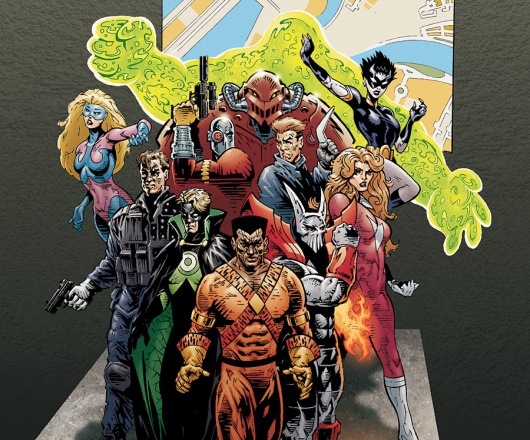 Warner Bros. is going on a suicide mission, setting up the DC Comics
property “Suicide Squad” for Dan Lin (“Sherlock Holmes”) to produce as
a potential franchise.

Stephen Gilchrist from Lin Pictures will co-produce. Justin Marks (“20,000 Leagues Under the Sea,” “Hack/Slash,” “Street Fighter”) is penning the screenplay.

“Suicide
Squad” will feature a mix of well-known and unknown villains recruited
by the government to accomplish a task deemed too dangerous for
superheroes. The historically independent operators must bury their own
interpersonal conflicts and agendas to form a cohesive unit to take on
a singular task.

From Topless Robot: There’s no goddamn way. First of all, let’s remember that Warner Bros. has announced about a dozen DC films over the past few years — Green Lantern, Green Arrow, Aquaman, the Supermax movie starring Green Arrow, a dozen different Superman films, and more — and none of them have ever gotten close to being made. And those are the films starring heroes. Suicide Squad is mostly nth-tier villains, who mass audiences would not and will not give the tiniest shit about. The “well-known” villains? Well, they kind of need to be introduced in actual goddamn superhero movies before they become “well-known” to mass audiences.

Second, I was under the impression that Warner and DC sat down recently to have a big brainstorming session about how to make a decent DC movie universe, or a least a coherent motion picture release plan, given Marvel’s recent box office badassery. If doing Suicide Squad was the end result of that meeting — if they believe they should be making a Suicide Squad movie before a Wonder Woman movie — then it is frankly amazing these people can put on their pants in the morning without accidentally strangling themselves.

I’m not saying Suicide Squad is a bad concept, or that it wouldn’t make for a fun — even good — movie. But it would absolutely flop at the box office because mass audiences don’t know about these characters. Eventually, the one person with a lick of sense over at Warner/DC will realize this, and cancel Suicide Squad like they’ve canceled all the other movies. Meanwhile, the genuinely known DC heroes will continue waiting with their super-thumbs up their super-asses.