Beloved by cavity-riddled children and obsessive collectors worldwide, PEZ is the success story of an Austrian candy company that blended candy bricks with wobble-headed toys. The result has been a personal sugar delivery system that’s fun for all ages. Topped with the heads of original and licensed characters alike, the spring-loaded dispensers have sported hundreds of looks since their 1950’s debut. Topless Robot takes a look at eleven of PEZ’s munchie machinations deserving of much nerd love.

When it comes time to “rock the dragon,” nobody does it like Dragonball‘s resident wish-granter. He may not have the pizazz of some other giant lizards (like the fat one from Namek or the Black Star dragon from DBGT), but his popularity with yellow-haired dudes who yell a lot is through the roof. Just be careful with this PEZ dispenser — waiting too long to eat its seven pieces of PEZ will result in them turning to stone and scattering across the Earth. 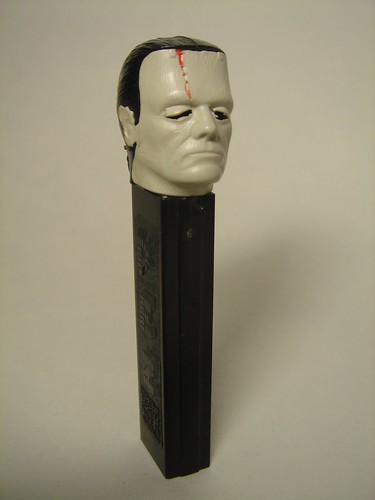 Truly Frankenstein is a pitiable creature. As the only PEZ dispenser to sport a hemorrhaging head wound, he is no doubt hated and feared by his far more adorable brethren. The good news is that it’s easy for people to mistake the likeness for a poorly sculpted version of Halloween‘s Michael Myers. People love that guy.

The entire Nintendo PEZ line is something to behold, but only one stays true to character in dispenser form. Yoshi, just like his 16-bit counterpart, projectile vomits and “hatches” from an egg-like container. Also, as in established Mario-lore, dinophiles have more than one Yoshi option to choose from. There’s a standard-sized Yoshi stateside, as well as a gashapon mini Yoshi (pictured above) found in Japan. It’s all the Yoshi a mustachioed Italian plumber could hope for. 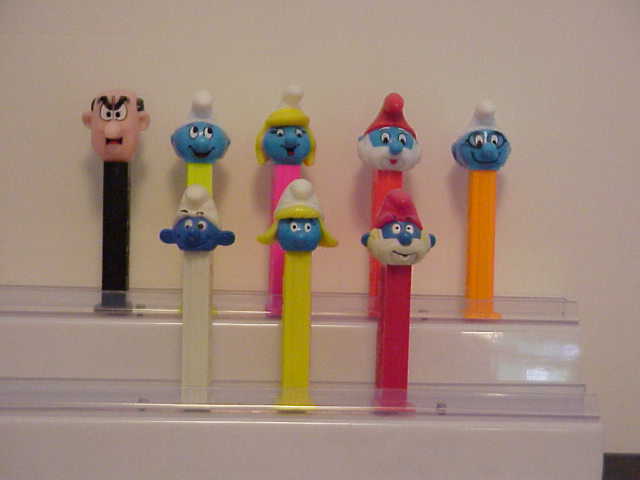 For Smurfs fans, there’s nothing better than merchandise showcasing the select few unique characters in the blue society. The most unique character among the Smurfs line is no doubt their feared conqueror Gargamel. With his clearly insane visage, the evil wizard stands out even among his fellow insane evil PEZ dispensers. 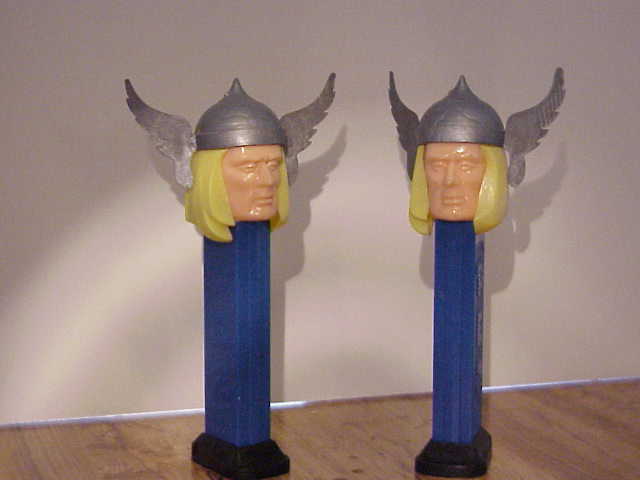 Unlike his super peers Spider-man, Captain America and Wolverine, Thor is one of a few Marvel Comics heroes lacking a modern PEZ redo. The Thunder God’s curse is a collector’s gift though; a Thor dispenser in decent condition can fetch several hundred dollars from those with the urge to own a mini master of mjolnir. Another fun fact — unlike Spider-man and Cap, Thor was the only PEZ dispenser not based on the 8-inch Mego head sculpts of the day, instead he’s a redeco of an existing PEZ head, topped with a Mego Thor helmet…or something.

As the cutest and debatably most invaluable member of the Straw Hat Pirate Crew (he’s a doctor on a pirate ship, ya see?), One Piece‘s Tony Tony Chopper defies anime furry clich?s with his power to “hulk out” and transform between multiple forms as a man-reindeer hybrid. He also eats his own brand of candy (it’s more like speed, honestly) to focus his powers and smite his foes. How can anyone not love a cute, doping mutant reindeer pirate doctor clad in a pink hat?

Even though most Americans only experience Asterix as part of their high school French classes, the property has enjoyed mega popularity across the Atlantic for decades. Several incarnations of the Gaul leader have been produced over the years, but the vintage Asterix PEZ holds a special place in fans’ hearts due to it’s clear lack of pupils.

That *other* beam sword-wielding sci-fi star of the late 1970s, the RX-78-2 Gundam is a joy to behold with a near-perfect head sculpt and spot-on paint applications. There’s no Amuro Ray inside, but it does come stocked with cola PEZ candy, which should help break the ice at the next cosplay tournament.

The best thing about the E.T. PEZ dispenser is that it addresses the extraterrestrial’s biology far more thoroughly than Steven Spielberg’s blockbuster film. For example, the movie shows many examples of E.T. indulging in sweets, but did Elliot ever have to clean up after his barely-domesticated friend? The answer is no, and thanks to PEZ, now everyone knows why. The sweets come out of his neck. Adorable.

When is a PEZ dispenser not a PEZ dispenser? It sounds like something a drunken dude in a Riddler costume would say at a Con, but as this item proves, it can be a legitimate question. The PEZ Mp3 player is kind of a bastard since it doesn’t include any candy, but it does supposedly hold up to 128 songs and work on both Mac and PC. Another issue is that it’s topped with PEZ’s mascot (of sorts), the PEZ Boy, but crafty collectors would have no problem swapping out his likeness for another character. Now, if only there were PEZ songs to download…

PEZ guns are a case study in bad decision-making. Firearms and candy are simply two fun things that are not necessarily fun together. Candy projectiles are a fabulous idea. After all, kids love to hurt one another. Problem is most parents aren’t too keen on conditioning their younglings to unload firearms into their mouths. For now, collectors will have to content themselves with vintage varieties, but who knows, perhaps one day PEZ will once again come with a 3-day waiting period.