Seeing how you are spending valuable minutes of your life visiting this website, it’s probably safe to assume that you are pretty interested in action figures. That’s understandable, as these pieces of molded plastic pretty much make life worth living for kids (and we grown-ups sure dig them too). With the rise of ToyFare magazine in the 1990s, the unthinkable happened–action figure collecting became a recognizable and, in some circles, respectable hobby. Soon toys created in part to profit from the nostalgia of adult collectors were everywhere.With this development came the realization that many action figure lines were dying untimely deaths due to economic factors, poor planning or pesky legal issues. Focusing on toys based on movie and TV properties, this list examines seven lines that never had the chance to fulfill their true potential. These playthings may be gone, but we’ll probably never stop obsessing over them. 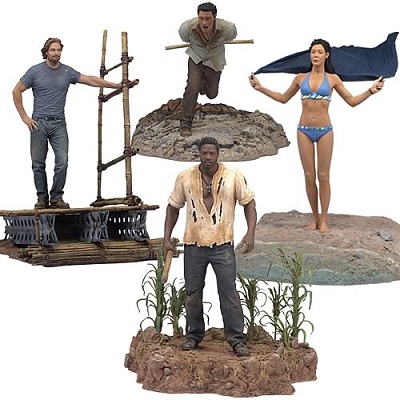 What was released? McFarlane Toys put out ten figures based on main characters from the series’ first and second seasons. They also released a light-up Hatch diorama with teeny-weeny versions of Locke, Kate, Jack and Hurley. It was tremendous.
What went wrong? Poor sales led to the line’s cancellation before figures of such fan favorites as Desmond and Juliet were released. Given the show’s ever-growing stable of characters, this is a line that should have went the duration of the series.
What should have been done: With a original retail price that ranged from $15-$20, these figures were doomed from the start. Instead of the 6-inch figures, McFarlane would have been better off issuing 3 ?” figures at a cheaper price point and offering vehicles such as a DHARMA van for Hurley to mow down Others with. (No doubt packaged with an exclusive Roger Workman corpse figure). McFarlane Toys also should have ditched the cool-but-useless accessories and voice chips that came with each figure–unless of course they released a talking Michael that just screamed “WAAAAALLLLLLLLT!” 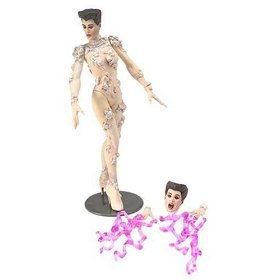 What was released? Fantastic, highly detailed figures of Slimer, Gozer and the Zuul and Vince Clortho Terror Dogs, as well as a 15″ Stay Puft Marshmallow Man.
What went wrong? Goddamn likeness rights issues resulted in toy manufacturer NECA not being able to release figures based on Murray, Aykroyd, Ramis and Hudson. The details of exactly what happened haven’t yet been disclosed, but unsubstantiated rumors suggest that Murray put the kibosh on the deal. Et tu, Venkman?
What should have been done: Ideally, the actual Ghostbusters figures would have been the first ones issued, but being a small company, NECA might have been unable to pony up the cash if the actors demanded a chunk of the profits. As easy as it is to fault NECA, by all accounts they tried their hardest to secure the rights before the negotiations fell through. But it’s no fun to have a Gozer figure without the guys around to show the prehistoric bitch how things are done downtown. With the recent announcement that Mattel will be releasing a new Ghostbusters line complete with figures bearing the likenesses of Murray, et al, this should change. Let’s hope they don’t screw it up, or there will be a nerd uprising. 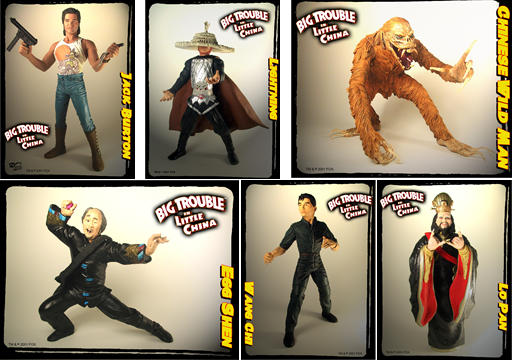 What was released? Barely articulated plastic representations of Jack Burton and company as seen above.
What went wrong? Made by the now-gone N2 Toys, the figures were overly cartoony and their stupid permanent poses were an embarrassment to desks and shelves everywhere. They were also impossible to find at retail stores, forcing fans of John Carpenter’s cult masterpiece to pay outrageous prices for them online.
What should have been done: A Pork Chop Express with Jack Burton playset would probably have been asking too much, but would it have killed them to make Gracie Law or Exploding Thunder figures?

What was released? From 1994-1999, Playmates offered a variety of 4.5-inch figures based on Deep Space Nine. Eventually, the waves of figures were merged into a line that encompassed all of the various Star Trek series and films.
What went wrong? Although it is more fondly remembered now, at the time of its initial airing DS9 didn’t garner much respect. Paramount was too busy focusing on Star Trek: Voyager and the films featuring the Star Trek: The Next Generation cast to give Deep Space Nine much attention. In turn, showrunner Ira Steven Behr and company went on to make the best Trek series to date. The downside of this is that the show totally got the shaft when it came to the toys.
What should have been done? Too consumed with releasing endless variants of Captain Picard and various shitty aliens from Voyager, Playmates completely neglected to make figures based on DS9‘s long-running Dominion War plot — resulting in fans of Nog, Admiral Ross, Ezri Dax, Weyoun, General Martok, the hologram Vic Fontaine, Odo’s evil mom, and other characters being shit out of luck. It may be small consolation, but Diamond Select Toys/Art Asylum is finally releasing some of these red-headed Trek stepchildren in their limited Deep Space Nine line of figures. 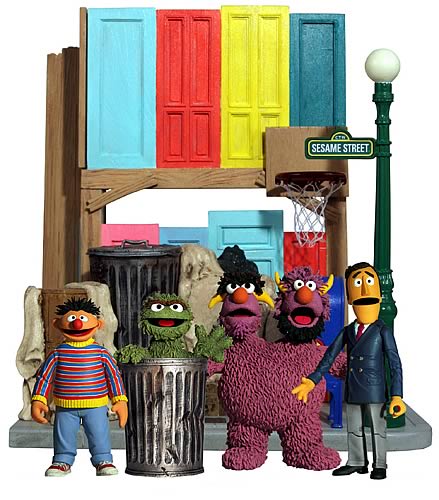 What was released? A Super Grover figure that could be the greatest Muppet-related toy of all time along with plenty of information about great-looking Sesame stuff that was never to be. Fuck.
What went wrong? After managing to please both kids and collectors alike with their excellent Muppet figures, Palisades Toys laid out plans for an ambitious line of Sesame Street products that would have included a brownstone replica reminiscent of the old Fisher-Price Little People playset and figures representing such sought-after characters as the Yip-Yip Martians and Roosevelt Franklin. Tragically, Palisades went bankrupt and the line was cancelled shortly after it was announced.
What should have been done? Palisades buckled long before government bailouts were all the rage, so pretty much nothing could have been done. The love and talent was there, but the finances weren’t, and Muppet fans are left to ponder the toy possibilities that the line could have offered. Keeping with the “everything’s A-OK” ethos of the series, maybe it’s best to dwell on the hope that another company will snatch up the property. Until then we’ll have to ask: can you tell me how to get…a goddamn Guy Smiley figure? 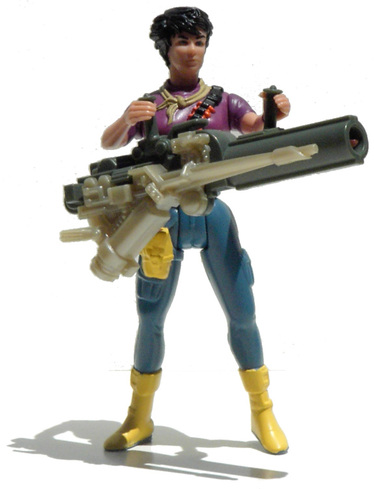 What was released? Kenner’s 1990s Aliens line, complete with an inexplicably muscular Bishop and day-glo extraterrestrial foes. Almost to apologize for these, McFarlane issued a Corporal Hicks as part of their Movie Maniacs line as well as a generic alien from Aliens. Topping those are a stunning line of Colonial Marines released by Hong Kong’s Hot Toys. The downside? They’ll cost you upwards of $200. Each.
What went wrong? Kids loved the various Aliens figures, so Kenner made someone happy. Good for them. Jaded adult collectors hated how the line was packed with repaints and characters that bore no resemblance to their cinematic counterpart.
What should have be
en done? Before the original 18-inch Alien toy scared the bejesus out of kids and parents, Kenner was planning on releasing 3 ?-inch versions of the Nostromo crew–you can see intriguing prototypes of the figures here. This idea went out the window once they released that the film wasn’t kid friendly. For their Aliens toys, they decided to downplay the flick’s space terror origins and instead release toys featuring big biceps and bigger guns. Not a surprising move given the fact that most kids who played with the figures never saw the movie the toys were based on. Ideally, you would have a pocket-sized Bishop that you could rip apart then reassemble. But you don’t. Fuck again. Those seeking movie accurate Aliens figures simply have to shell out for the Hot Toys products or do without. Toy collecting: it’s not for the meek.

What was released? Despite the fact that lines based on Indiana Jones failed twice previously (in 1981 with Kenner’s Raiders of the Lost Ark line and LJN’s 1984 Indiana Jones and the Temple of Doom offerings), Hasbro released figures based on all of the Indy films in 2008. The fools!
What went wrong? Indiana Jones and the Kingdom of the Crystal Skull sucked. Kids and adults alike had little interest in buying the Shia-based toys, so they sat on the shelf. Since the stock they already had in wasn’t moving, toy stores didn’t want any new Indy figures. Before you know it, the only way you can get the Temple of Doom wave is through online price-gougers. And that really amazing Toht figure with the melting face that Hasbro taunted you with pictures of? You’re never going to own him.
What should have been done? Hasbro released an unwieldy amount of merchandise in conjunction with Crystal Skull‘s theatrical release — including a playset, several vehicles and role-playing items like that stupid sword Shia the Beef used and that useless plush whip. Had they scaled back on some of this nonsense and focused more on the figures themselves, you probably wouldn’t have had to spend $30 to own Mola Ram. But instead, Indy crap clogged the shelves and your dreams of owning Satipo died hard. If dejection has a name, it must be Indiana Jones.