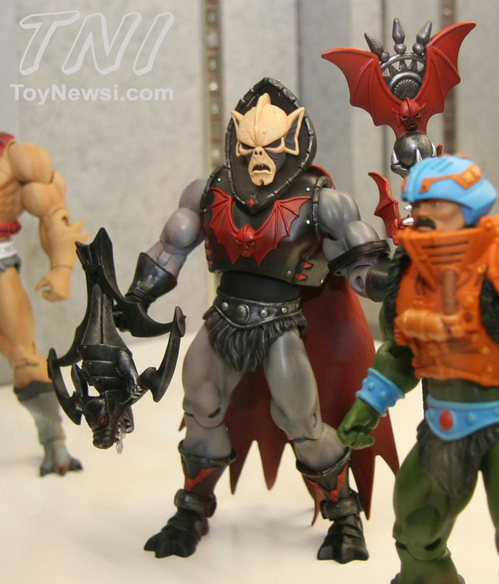 Sorry, folks — it’s my site, and I’m the one with the horrible, paralyzing obsession with Masters of the Universe, so I’ve decided I’m going to breakdown the MOTU news first, courtesy of ToyNewsI. More toy news to come. Just later.

? After Faker in March and Mer-Man in April, the figure line-up will be Zodac, Hordak, Mat-at-Arms and Tri-Klops, one per month. Like Mer-Man, Man-at-Arms will have two interchangeable heads, facial hair-free and mustache ride-capable.
? There will be two female figures released between now and January ’10.  Given her prototype shown at NYCC, I’m guessing Teela will be released in ’09, with She-Ra due next January. Of course, the only other female options are Evil-Lyn and the Sorceress, so the odds are probably in my favor.
? Battlecat is due in 2010, with Panthor following. Hopefully Panthor will be flocked.
? If/when they do Moss Man, he will be flocked, but will probably not have the fresh scent of pine. (Nerd note: I’m going to pay $20 fucking dollars for a flocked version of Beast Man, no mold change necessary, and you can’t fucking spray the figure with Lysol? Goddammit.)
? This isn’t from ToyNewsI, but Cornboy from the Four Horsemen, sculptors extraordinaire, hints that the 2002 He-Man might get the Classics treatment in 2010. This is the best news I’ve heard so far, and the reason I’ve continued to buy every single one of these goddamned things.

ToyNewsI has pics of Zodac, Man at Arms (both heads), Tri-Klops, Hordak and more unpainted Teela here. I’m not going to go into my full nerd rant on MOTUC here, since I’ve made my viewpoint known previously. But I would never know Zodac wasn’t the 1982 toy unless I looked at the joints. Sigh.