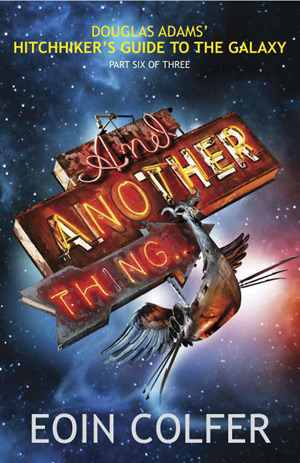 In related news, Eoin Colfer, the author of the hit Artemis Fowl children’s book series and the hack hired by Douglas Adams’ widow to continue the series, is surprised Hitchhiker fans hate him with a burning passion and would glad run him over if they saw him walking on the side of the road. From Wexford People:

WEXFORD author Eoin Colfer has stopped answering his emails after being
besieged by fans of the science fiction series ‘The Hitchhiker’s Guide
to the Galaxy’.
…

However, since he signed on to the project, Eoin says he has been
amazed by the emails and letters he has received from fans of the cult
series.

‘It’s usually from guys saying don’t do it. People who believe that
doing a sequel is a terrible idea and saying stay away from it. The
reaction has been much stronger than I thought,’ Eoin told the Sunday
Tribune last weekend.

Hitchhiker fans have now moved on to target the MySpace website of
his younger brother, musician Niall Colfer, who releases his debut
album ‘Finds’ on March 6.

‘There’s a link to my website from Eoin’s,’ Niall said. ‘
Previously, I would have got emails from people asking to get a signed
copy of an Artemis Fowl book, but the Hitchhiker emails have a more
sinister thing about them.”

‘Purposely, I haven’t tried to write like Douglas because he was a
genius. Instead I’ve written an Eoin Colfer book with Douglas Adams
characters,’ said Eoin.

Colfer — re-read that last quote, and then see if you’re still surprised why Hitchhiker fans loathe you. If you still don’t get it, I’m told by cutting off your air supply — perhaps with a rope, fashioned into some kind of noose, for example — you can lose weight and promote hair growth. Why not give it a shot?