The Happy Meal was introduced in 1979, the brainchild of an ad exec working for McDonalds and wanting to capitalize on the then-new success of the drive-through window. Early Happy Meals were pretty lame affairs, but they were only 99 cents too.  And the toy wasn’t actually that bad — sure, they were just McDonaldland erasers: Ronald, Grimace, the Hamburglar, and the rest all done up sort of in M.U.S.C.L.E. style — but that in itself kicks all sorts of ass over the crap that Happy Meals would try to foist on kids later.

Over time, the idea grew into not just a kid-magnet, but a goldmine of cross-promotion–the first movie tie-in was with Star Trek: The Movie, and while the movie sort of tanked, the toys did pretty well. That led to a focus on more of the same, and once Disney bought in? Game over.  The fact is that it’s the tie-in stuff that mostly rocks — when McDonalds was left to their own devices, the quality of the toys dipped dramatically, and so did the play value.  (And as this list will show, even the tie-ins sometimes went wrong.) These, then, are the toys that kids complained about from the back seat. 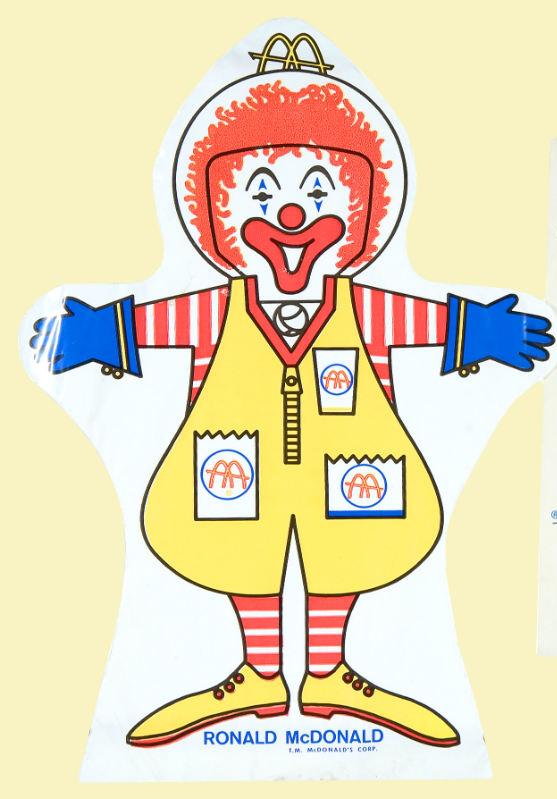 It sounds obscene, I know. And it sort of was, for those kids subjected to this early Happy Meal “prize,” usually given out when a store had run out of their allotment of the real Happy Meal toy. Sure, it had Ronald McDonald printed on it, but is that supposed to make you feel better? Combine the baseline lameness of getting this thing as a “prize” with the apparently dark ages of graphic design, in which characters just look too fucking scary for words. 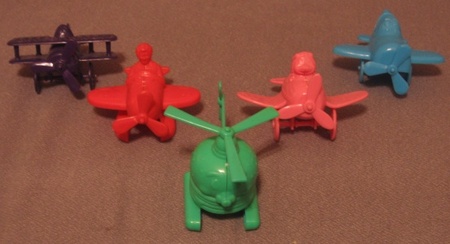 This is a good example of how Happy Meal toys sort of suck when they’re about McDonalds. These things look like they belong in cereal boxes, and even then, they’d be a serious disappointment. Toy quality aside, did anyone ever know anyone who actually liked most of the McDonaldland characters as kids? They were there, and they were fine, and once in a while, you might feel sorry for Grimace or something, but that’s more or less where the emotional tie ended. How many kids really wanted a Birdie in a Biplane? 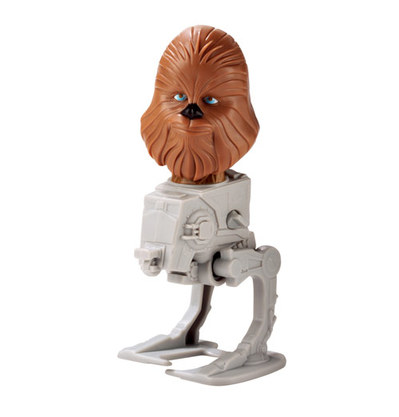 This is a good example of how movie tie-ins can go wrong; by supporting semi-collectible pieces of crap that kids don’t care about, and are too stupid-looking to really be popular with older fans. This Clone Wars line was just a stupid idea, with virtually no play value. Giant heads erupting from tiny vehicles — these are not two great tastes that taste greater. Instead of peanut butter and chocolate, they ended up with something closer to peanut butter and gasoline. As a side note, this also marks the four-hundred and eighty-sixth time that Chewbacca has been completely screwed by the Star Wars franchise. He gets an Imperial Scout Walker? Seriously, give a Wookie a break.

Posters aren’t necessarily bad things for kids prizes — kids like to decorate their room with ridiculous shit just like the rest of us. But a poster that comes in a Happy Meal? Yeah, that sounds like trouble. First, it’s going to come all folded up, and second, it’s going to sit next to the fries and soak up grease. But all in all, not the worst prize–at least the first time around. See, McDonalds did this promotion twice — first when E.T. was actually in theaters, which makes sense. And then again three years later, in 1985. When it made no sense at all. Unless you consider that McDonalds probably had a shit-ton of leftover posters in a warehouse someplace.

Okay, first, I have to officially lodge a protest that there are kids dolls that are produced by a company called “Madame Alexander,” who frankly sounds like an old-west whore. That said, the 2008 marriage of Ronald McDonald and Madame Alexander just sounds like some sort of garishly colored fake-baby clown funeral. Most horrifying is that this wave was all based on The Wizard of Oz (exactly why is unclear — it’s not like Oz suddenly became at all relevant in 2008) — and it hit its nadir in this evil winged monkey baby. First off, this is where cross-marketing goes completely off the rails. Second, this thing is just utterly terrifying. The flying monkeys from Oz have seriously creeped out kids for years; sticking a baby-version in a plastic baggie (looking for all the world like it suffocated and died in there) just ups the horror. Here, have a nightmare with your McNuggets, kid. When we get home, maybe I’ll let you watch Saw while I have sex with your Mom. 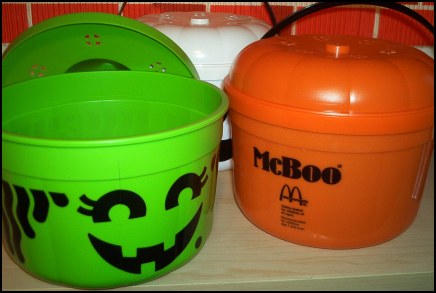 While the Halloween-themed pails aren’t so bad in and of themselves (they’re cute, I guess, and actually serve a function, supposedly — though any Trick-or-Treater worth his glow stick would fill this mother with blackmailed candy several times over). What made these suck was that they didn’t include a price — they were the prize. Kids opened these up, waiting to see what was inside, and they got… nothing. Now, it’s important to note that these buckets actually hearken back to the early days of McDonalds, when the activities on the boxes were thought to be the major draws. But were ad-men astute, they would have noticed that this idea fell away in favor of toys in little baggies nestled next to a sack of six fries and a burger the size of a beer coaster. This happened for a reason. And that reason is: no matter how fun the packaging is, what’s inside still fucking counts. 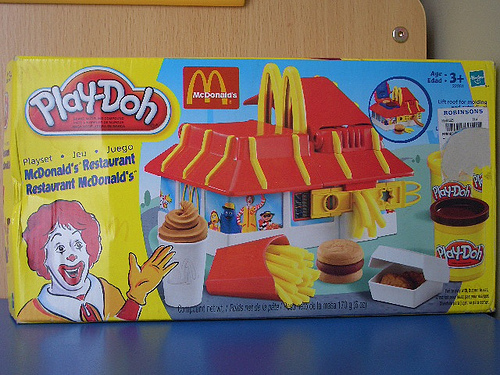 This mid-’80s promotion must have seemed like a good idea at first. Little cardboard cylinders of Play-Doh — and what kid doesn’t like Play-Doh? Of course, it was a tiny amount of Play-Doh — about the size of a McNugget. (And strangely? Healthier to consume.) And you only got one color at a time, which sort of sucked too. But ultimately, what puts it on this list is that this prize ended up being more of an invitation to get yelled at, because you’re getting these at a drive-through, opening them up in the back seat of your Dad’s company car, and getting it all over the upholstery. Of course, the real idea was that this was an easy deal to make; Play-Doh has had a relationship with McDonalds from way back, selling Happy Meal playsets in the stores, and Play-Doh packs in Happy Meals. Corporate synergy — I’m lovin’ it. 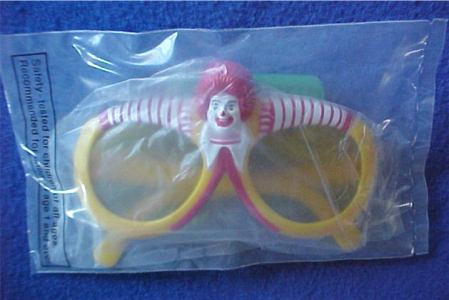 The beauty of these frames, of course, is not just that they allow you to show off the fact that you’ve recently dined at Mickey D’s, and that you’re damn proud of it. More importantly, it creates a sort of symbiotic relationship with Ronald himself, as he springs from your head like Athena from the cranium of Ze
us. In this, Ronald is sort of acting like your own personal walking-around valet, greeting everyone as you pass. He’s like a forehead ambassador from McDonaldland (something you might think that Mayor McCheese would take on, since you know, he’s already in politics). Sadly, what Ronald seems to be saying to everyone here is “please beat the crap out of whoever’s wearing me.” So you know, good with the bad, dark cloud, silver lining, all that. 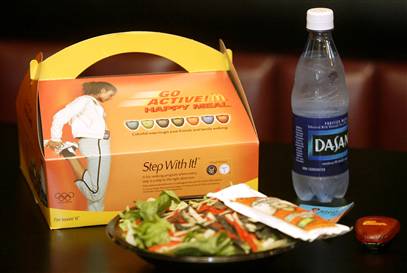 This idea completely shot the shit out of the entire concept, and aimed Happy Meals at health-conscious adults. (Wait, what?) Yes, completely disregarding any demographic success the chain had ever had, they devised a brilliant strategy to put salads, water, and cheap, virtually non-functioning pedometers into Happy Meals. Aimed at people watching their weight. At McDonalds. With tons of extra packaging to boot, just in case these imaginary customers were also concerned for the environment, so that this would be a complete failure and the height of irony from any and all perspectives. 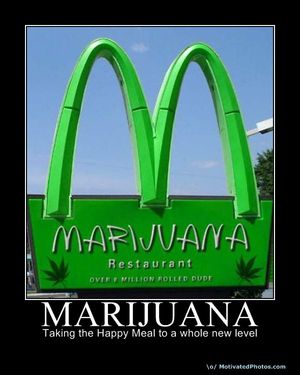 Man, did this Happy Meal end up in the wrong hands. Had this not been discovered by an 8-year-old Chicago girl in 2007, and instead been purchased by a couple of college kids with the munchies, it would find itself on the list of “Best Happy Meal Toys Ever.” Alas, it was not to be. Instead, said pot (along with a lighter and a pipe, of course) led police to arrest the young man (and soon to be former McDonalds employee), who had needed a place to put his stash, and considered a stack of Happy Meal boxes kept right by the drive-through a good hiding place. (This is your brain on drugs, kids.) Of course, this inclusion to the McDonaldland mythoi does go a long way to explain the insatiable hunger of the Hamburglar, not to mention Grimace’s very existence.