The Garbage Pail Kids were a total win for kids of the 1980s — they were both gross and funny; they poked fun at the sugary cute Cabbage Patch Kids that were so popular; and, most importantly, they drove parents and teachers up the wall, bringing out such an exaggerated outcry that you would think kids had taken up full-on Satanism. It was hilarious. The Garbage Pail Kids stickers were masterpieces of the trading card genre, and it’s extremely difficult to pick the 13 best out of the hundreds of cards released. But Topless Robot was up to the task, willing to roll up our shirtsleeves and thrust our arms deep into the dumpster to pull out a baker’s dozen of the greatest Garbage Pail Kids ever committed to cardstock. 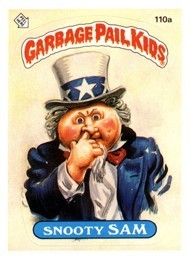 One thing the very talented artists who drew Garbage Pail Kids were great at was putting a twist on already iconic images and making those images iconic on their own. Snooty Sam was basically Uncle Sam telling you what he really thought of you in modern times, when many people suspected the U.S. government did not have citizens’ best interests at heart. Or maybe it was just Uncle Sam looking like a Cabbage Patch doll and picking his nose. Either way, there was an adult level of humor in the original cards that has mostly gone missing in some of the more recent editions of GPK.

This is what will happen when we begin to fully rely on emoticons to express our feelings. Garbage Pail Kids were good at offering a fascinating image that could lead to all sorts of stories popping up in your mind to explain the incident you were glimpsing. In this simultaneously horrifying and amusing card, a smiley face pin has apparently decided to violently switch places with a Garbage Pail Kid’s now-pissed-off real head. Who thought of these things? 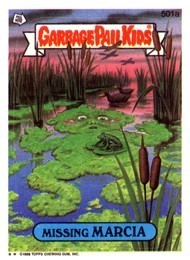 Topps had some balls. While some of the more obviously controversial Garbage Pail Kids went unreleased (such as  a couple showing characters committing suicide with handguns), the more subtle subversities often got through. Missing Marcia, for example, is clearly an inappropriate but still evilly humorous joke about an unfortunate missing child who can be found at the bottom of a swamp. 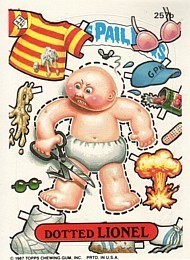 GPK liked to break the fourth wall on occasion, and there are some excellent examples of characters escaping their cards. The best is Dotted Lionel, who is an intriguing case of a Garbage Pail Kid paper doll who has taken it upon himself to cut himself out, even though he’s not the most accurate with scissors. Ouch! 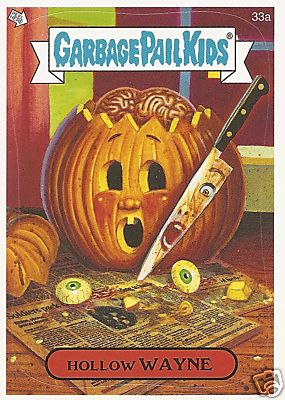 The Garbage Pail Kids sets released in the 2000s lack much of the panache of the originals. There’s too much of a reliance on snot, piss and farts to try and be outrageous and funny. And the artwork isn’t always the best, despite many of the artists from the original GPK sets returning. Garbage Pail Kids were always gross, but often managed to also be somehow visually appealing, with a larger variety of jokes. That said, there are a few awesome stand-outs in the new sets. And one is Hollow Wayne, which captures a WTF?! moment of horror perfectly. There’s a pumpkin being carved, but he/she has human organs inside! Why? Who knows?! The pumpkin is screaming! And in a fantastic, classic touch, you can see the face of the person who carved the pumpkin, screaming and reflected in the knife! This card deserves an award for being so truly creepy. 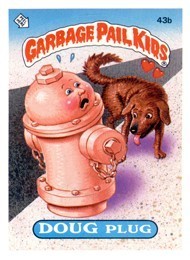 Ah, you gotta love those GPK cards that capture a character at the moment they realize disaster is about to happen. Or in the case of poor Doug Plug, a really smelly indignity. The funniest part is left to the imagination. Being the good source of child entertainment that they are, Garbage Pail Kids are quite adept at presenting characters just before they meet horrific fates (or have already but haven’t died from them yet). 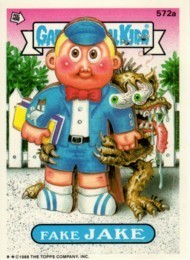 Something unfortunate happened not long before the 10th series of GPK came out. The makers of Cabbage Patch Kids finally took Topps to court for aping their designs for years on end, and Topps lost. The designs of the GPKs had to be altered to a more bug-eyed, wooden appearance that was pretty sucky and the change remains in effect to this day. Despite losing some of their visual style, great GPKs still showed up in the later sets, such as Fake Jake. Not really a Garbage Pail Kid at all, this slobbering, mischievous alien has for some mysterious reason decided that a chubby-cheeked school kid is the best disguise. Maybe he shuffles around the playground behind his cardboard cutout during recess, attempting to eat classmates that wander out of the teacher’s sight. And the scary part is you know that, contrary to logic, his pathetic disguise fools everybody. 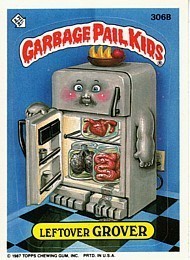 Some of the best GPKs were inanimate objects or other non-humans, as it allowed the artists to be more creative and surreal. Leftover Grover here is one fridge you would not want to accidentally eat a midnight snack from! 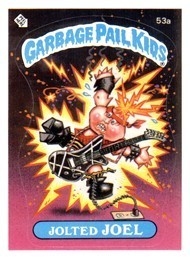 Here’s a secret — the first three sets of Garbage Pail Kids were pretty much flawless from back to front and all of them could be on this list. Maybe it’s because the ideas were fresh, and the art was at its best. Live Mike was what a true rocker should be, plugged in and electric in every way. He also got the honor of being a large puzzle you could put together from the backs of other cards. 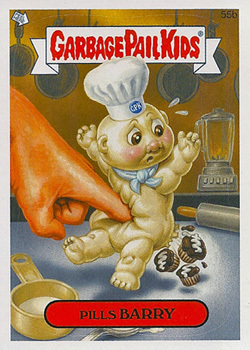 The concept of a Pillsbury Doughboy who poops out chocolate cupcakes when you poke his stomach is simply and utterly the best concept ever. ‘Nuff said.

It’s hard to say what it is about the first series of Garbage Pail Kids that was so perfect. It wasn’t just because they were the first and nostalgia has taken over. The art stands out and looks a bit different than in all later sets. Maybe it’s the combination of plain backgrounds and well-designed characters, airbrushed and detailed to bring out every surreal and freaky detail. The freshness of the concept didn’t hurt, either. When kids first saw a card showing a decayed and zombified Cabbage Patch Kid, their hearts were won over and there was no turning back. 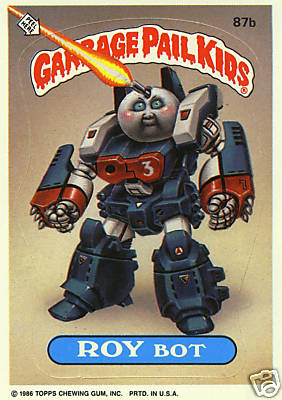 Kids in the 1980s
loved them some GPK, and they loved them some robots. This unholy, shiny combination of all that is good is a thing of beauty. Why couldn’t he have been in that Garbage Pail Kids movie? Then maybe it wouldn’t have sucked so hard. 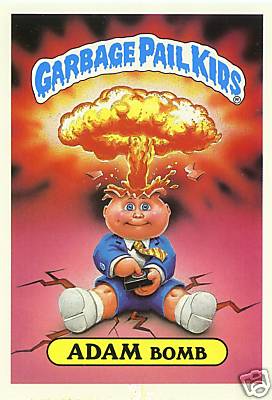 Adam Bomb is the most iconic Garbage Pail Kid, and not just because he graced the card wrappers for the first five series and showed up many times throughout the years in new versions of himself (one in which he’s pressing a second detonator and blowing a hole out his ass) and homages. It’s because he made a single, impactful statement that summed up the nihilistic humor of Garbage Pail Kids. By pressing that button and causing a mushroom cloud to explode out of his head, he’s a perfect symbol of the era in which he was created, when many of us had to laugh at ourselves in spite of and because of the man-made doom we had fashioned for ourselves.