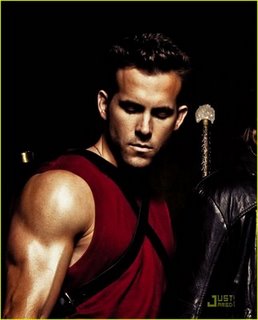 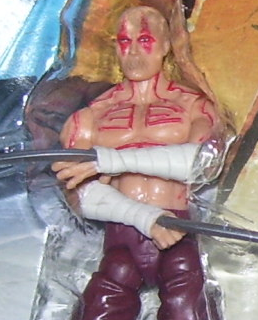 I have good news and bad news, people. The good news is that Topless Robot seems to have its first, real, honest-to-goodness Hollywood inside tipster! He worked on the Wolverine movie, and emailed me to clear up the Deadpool situation and… well, that’s the bad news, especially for all you folks still deep in denial. Now, these are very much spoilers, because there’s some very specific info being revealed here — consider this your SPOILER WARNING. Now here’s what my guy (I have a guy! I’m so excited!) says:

? Ryan Reynolds shows up for 10 minutes in the beginning of the film. He’s part of Stryker’s team, and his mutant ability is mostly being a badass with swords, cutting bullets and the like. He is called Wade Wilson during this period.
? Stryker’s big plan (or one of ’em) is to make Weapon XI, a mutant with a shit-ton of mutant powers.
? Stryker uses Wilson’s body as the mutant power receptacle, and because of the scarring (I’m not sure whether that’s from a previous fight, or as a result of all the mutant powers getting packed into him), Weapon XI is played by Scott Adkins. Weapon XI appears for about ten minutes near the film’s end, and has the claws seen above (a la Wolverine), Cyclops’ optic blast, Wraith’s teleportation ability, and Wolverine’s healing factor, too. Also, his mouth is indeed sewn shut.
? Just like Weapon X is given the name “Wolverine,” Weapon XI is given the name “Deadpool.”

So really, the only inaccuracies with the toys is that Hasbro is calling the Wade Wilson figure Deadpool too, although I can see why they’d rather put “Deadpool” on the packaging rather than “Wade.” So, guys… you can freak out and boycott Fox if you want, but please, stop pretending these are two separate characters. Now, it’s possible my source is inaccurate, but he’s given me ample evidence to believe him (you’ll have to trust me on this). So in summary: Wade Wilson is Weapon XI is Deadpool, even if he’s played by two different actors. The movie’s Deadpool has two big, silly claws, at least by the end. I’m sorry. But that’s the way it appears to be.

On a slightly happier note, I’ve got a much more pleasant spoiler for you after the jump. It’s not at all Deadpool related, so I figured some of you would want to avoid it.

Apparently, there’s a cameo by a certain Professor at the end of the movie. When Stryker’s compound is falling apart and Wolverine is leading young Emma Frost and Cyclops out of the building, Cyclops suddenly knows the way out. When they get to the door, standing there — oh yes, standing — is Charles Xavier, controlling wee Cyclops’ mind like he’ll be doing several billion more times in the future. He’s apparently not played by Patrick Stewart, by the way. Weird.

Also: Despite what the trailer would have you believe, most of the other mutants are only cameos as well. Gambit only has about 10 minutes of screentime, for instance. Just like the Marvel Universe, it’s Wolverine’s show.

Finally, my tipster says the film isn’t quite as good as X-Men Uno or Dos, but it’s a hell of a lot better that X-3. That’s pretty much what I was expecting. But I’m guessing a lot of you Deadpool fans might be more aghast at the Deadpool Debacle than you were by X-3‘s rampant stupidity.