Hee hee! Although I’m sick, I’m in a pretty good mood, because I’m finally able to show you guys something I’ve been looking forward to for a long time (Note: not my penis). I had to wait until I found a big enough picture, and one surfaced this weekend (Note: still not my penis). If you guys don’t know the Hawthorne Collection, you know their products — they make high-end but chintzy collectibles for things like Disney and Elvis, but also Star Trek. That ludicrous Star Trek train? That was theirs. But I’m happy to report that they have absolutely surpassed themselves, and it perfetly wraps up a day when we’ve already discussed terrible Trek episodes, Kirk’s sexploits and men acting in inappropriately nerdy ways.

Ladies and gentlemen, I give you… “The Man Trap” figurine. 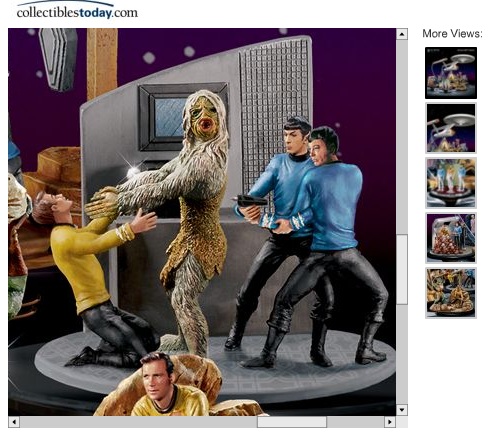 Holy fuck. Kirk is really on his knees, throwing his head away from the alien’s crotch. The alien’s hands were clearly holding Kirk’s head just seconds ago. Spock and McCoy — what the fuck are they even doing? Why are they standing like that? Sweet jeebus, I think their arms are actually intertwined! Are they dancing?!

For me, the cherry on this delightful cake of perversion is the expression on the alien’s face. He’s looking right at you, without an iota of shame any any of the decadence happening around him. You can judge him if you want. But he’ll keep on sodomizing Kirk while Spock and McCoy tango behind him… and you can never make him feel bad about it. Sign up to order yours — along with other, less horrifyingly perverse figurines — here.