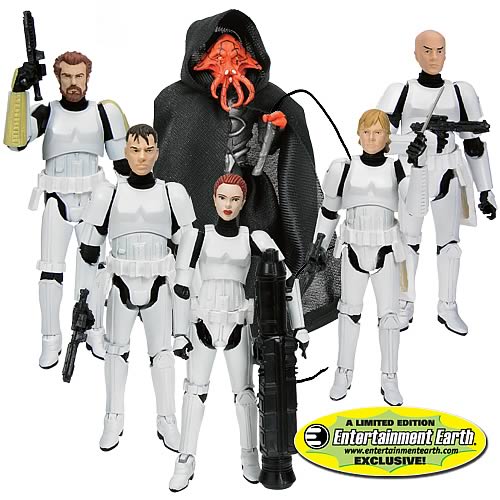 You may have noticed that this is the first “Toy of the Week” installment in many, many weeks. It was one of my regular gigs until I realized that I really don’t get my hands on that many new toys now, and thus to feature one new toy per week, I was beginning to feature some less than awesome toys. So I quit.

Then the fine lads and lasses of Entertainment Earth hooked me up with one of their Star Wars Joker Squad exclusive sets, so I felt the need to bring it back again. See, this set is awesome, and I’m not just saying that because I love Star Wars toys more than most members of my immediate family. Here’s what you get: Six figures from the Legacy #4 comic, including Sith squidhead Lord Maleval, and five Stormtroopers, all with removable helmets. Now, that’s a fine batch of troop-builders, right there, plus a groovy-looking villain with a lightsaber and a whip. 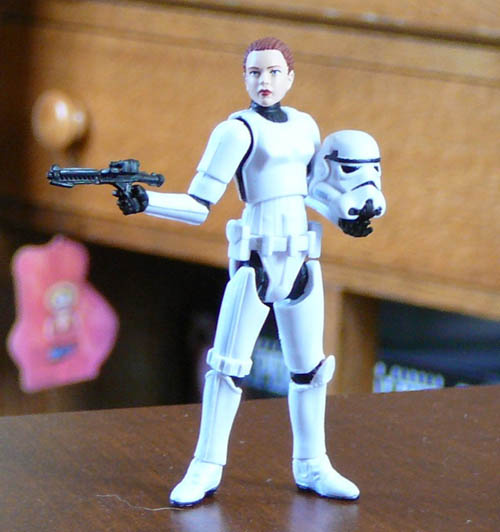 But that’s not all, because one of the ‘troopers is Jes Gistang, a sexy redhead and the FIRST FEMALE STORMTROOPER FIGURE EVER. I don’t know how or why Hasbro waited so long to make one, or what dark sacrifice Entertainment Earth had to pull to get it, but man, she is great, and not just because she carries a massive bazooka. 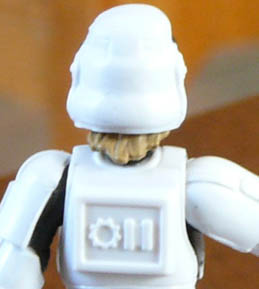 Despite the Sexytrooper, my favorite figure in the set is actually Hondo Karr. I have no idea who he is or what his deal is in the comic, but I do know he has a mullet. WHICH STICKS OUT OF HIS HELMET. This makes him the raddest Stormtrooper of all time. And since he’s also carrying a dagger — the only one in the pack to do so — he’s obviously the crazy redneck Stormtrooper. I can only imagine him shooting his rusted-over landspeeder with a blaster rifle over and over again, drinking space whiskey, and wearing a trucker cap that says “The Outer Rim Will Rise Again!” I love him so!

Now generally, I can’t buy Star Wars toys because I used to be addicted in a thoroughly Trainspotting kind of way. I buy one now, I wake up three weeks later without any clothes, and an IG-88 figure shoved some place uncomfortable. But if you don’t have that kind of a problem, this set is definitely worth picking up, and kind of a steal at $40 for having six figures with two brand-new molds. Hell, if Jes Gistang the Sexytrooper were on sale in regular toy stores, she’d be going for $40 on eBay at least. So order it here. Or HONDO KARR WILL CUT YOU, YOU GODDAMN CORUSCANT YANKEE