I don’t want to confuse you all. I’m definitely referring to the Tales of the Black Freighter DVD that came out yesterday. But the first thing you need to know is that the Black Freighter cartoon is just over 20 minutes long, while Under the Hood — the “documentary” replicating Nite Owl I’s autobiography, is almost twice the size at 35 minutes. So I’m giving them equal billing, even if the DVD cover isn’t.

Here’s the short version of my review: these two extras exist solely because director Zack Snyder thought they were integral to Watchmen, even if he couldn’t include them in the theatrical release. They both clearly cost a good deal of money, since one’s animated and one’s a 30+ minute feature that consists almost entirely of new footage. I’m sure that’s why Warner Bros. is selling it now for ~$15, even though we all know that both extras will be on the inevitable Watchmen Director’s Cut DVD Megaset Collector’s Edition, or whatever it’ll be called (with the Black Freighter actually edited into the movie). These things did not come cheap, and now they need the cash of an individual DVD release and the inevitable collection.

Unfortunately, neither are that great.

Actually, they’re both good, but not great. Maybe it’s because I liked the Watchmen movie that I feel Freighter and Hood weren’t made with the same level of artistry. Maybe if you hated the film, you’ll love these anyways. I imagine that, like the Watchmen movie, these things are just too polarizing for people to critique, except for themselves. Still, this is what I get (minimally) paid for, so my detailed review is after the jump.

Let me begin with Tales from the Black Freighter, which certainly  brings all the violence and exploding corpses and graphic death seen and implied in the graphic novel. It’s weird to watch the story straight through, when you’re so used to getting it in small snippits, but at 20 minutes it doesn’t waste time. Gerard Butler does a great job, voicing the doomed sailor with pathos but not melodrama.

My problem is with the animation and the direction. After seeing Snyder’s slavish devotion to detail in the movie, I guessed I was expecting Freighter to look like an E.C. comic come to life, or feel more stylized, or at least look more like Gibbons’ art, and it doesn’t. It’s different, but not just simplified for animation, which I would understand — it’s very much a modern but not extravagantly budgeted animation of Tales of the Black Freighter. It’s missing the E.C.-style, and it’s missing the garish comic book colors that set it apart from the rest of the Watchmen comic. Maybe it’ll work better this way when edited into the movie, but on its own, it feels lacking.

What it’s also missing is Gibbon’s style. The shots are usually straight-forward, losing Gibbon’s dramatic angles and framing. The whole animation is kind of wonky; the filmmakers — which include key animators in Texas and some unknown studio in Korea — made sure the main character’s hair was always blowing in the wind, which looks good, but then half the animation involves moving a picture via computer, which looks as cheap as it sounds. The backgrounds and water is gorgeous, but the highly detailed faces mutate wildly between key art, and it just looks damn weird. 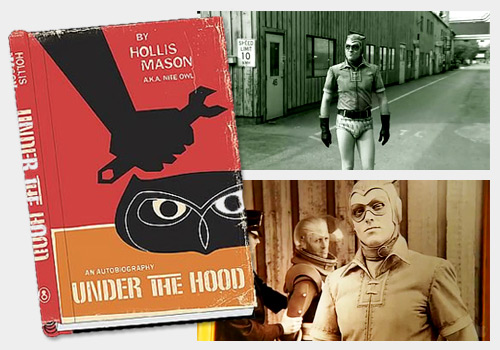 Now, Under the Hood has significantly less problems. The take is a 1985 news show called The Culpepper Minute, which is looking back at a 1975 episode of The Culpepper Minute, which talked to Hollis Mason about his life and times of crime-fighting. Let me start by saying the guy who plays Mason is awesome. He is absolutely perfect at representing the best of the old guard of the Minutemen, and his subtle, natural performance makes this feature.

The “documentary” obviously covers at lot of the backstory that the Watchmen movie briefly mentioned or implied, and while it contains no surprises for fans, it does present it all nicely. I’m sure it would contain a lot of “A-ha!” moments for people who watched the film but hadn’t read the graphic novel. Happily, Hood only features the bit players from the movie, giving more time to Carla Gugino’s Silk Spectre I and Moloch, along with commentary from men on the street like Bernard the newsvendor and Rorschach’s psychiatrist. Of the main six Watchmen heroes, only the Comedian gets a brief cameo (where he’s drunk and throws and interviewer’s camera to ground, of course).

But all those nods do tend to destroy the “reality” of the “newsshow” for me, since it’s trying so hard to incorporate so much from the movie. It’s not much of a problem, admittedly, and would surely be fine for folks less familiar with the comic. What I don’t understand is why Under the Hood needed to be an ’85 show looking back at a ’75 show. It’s so clumsy that they have to have a logo on at all times, explaining what is ’75 and what is ’85. The only benefit of having it technically air in ’85 is their ability to run a Veidt Nostalgia commercial, but I’d have much preferred to lose that and set the whole thing in ’75 for simplicities sake.

More aggravatingly, these time changes aren’t handled with the grace of many of the Watchmen viral videos we’ve seen. About the only difference from The Culpepper Minute in ’75 and ’85 is the host’s silly ’70s suit. While Hollis Mason and Silk Spectre I look appropriately and naturally ’70s, a lot of the “archived” footage and materials that was not taken straight from the film looks like crap. The newspapers especially look like they were thrown together in Photoshop versus having been made in the previous decades. It’s just missing the same artistry and commitment as the movie (and the time and budget, most likely).

Are either Black Freighter or Under the Hood awful? Not at all. Despite all my bitching, they’re both good, and my complaints are all of the “it could be better if…” variety. I’m giving them both a hard time because I really liked the Watchmen movie, and I think these both have problems the movie avoided. They’re definitely worth checking out, and if you can rent it or find it for less than $15 or have no patience, go for it (apparently, the listing price is $28, which is beyond ludicrous for 50 minutes of contents, plus a few other extras). I’d say most of you can and should wait for the inevitable Watchmen DVD release with ’em. I still think you’ll be happy to have them.