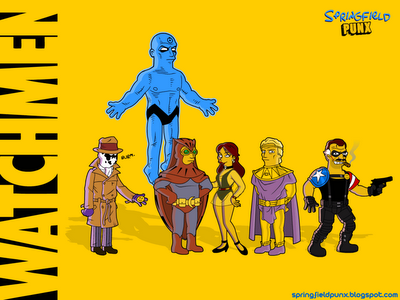 I’ve been doing my best to avoid Watchmen news this week, since we’re all pretty sick of the overdose of promotion and “news” as the mainstream tries to make heads or tails of the nerd-armageddon that is the movie adaptation. Still, there a few tidbits worth mentioning today, so don’t hate me. For that. Hate me because I talked about my anus in the last article.

? The reviews are generally good, but mixed. The nerds generally like it because it’s a shockingly faithful adaptation, the anti-nerds are bit flummoxed by it all, and those who are nerds but still in the mainstream think it’s so faithful it kind of hurts itself as an actual movie. Rotten Tomatoes reflects this, as the film has a 67% rating; your mileage might very. Incidentally, here’s Big Daddy’s review of the film, which I have to mention to get my allowance.

? The Watchmen: The End Is Nigh videogame comes out today on Xbox Live. It’s only downloadable, is supposed to be episodic, and is a hefty 1600 MS points, or $20. That’s about $10 more than I’m willing to pay to what is likely a shockingly inessential tie-in to the story. Tell me if I’m wrong.

? Super Punch has the best Watchmen article on the internet, in that it’s all awesome custom Watchmen toys and art (including the pic above) and no mention of nerds, Alan Moore or Zack Snyder. Definitely check it out.