It’s hard for an actor to establish himself among thousands of others who are all trying to make a name for themselves in show business, and even the most distinguished, well known actors who have been in some of the greatest movies in history have hammed it up in front of the camera out of desperation, a fat paycheck, momentary insanity, or any combination of the three. Below are 10 great, well-known actors who chewed so much scenery as crappy movie villains that they’re probably still suffering from lockjaw.

10) Frank Langella as Skeletor in Masters of the Universe

Frank
Langella has won a buttload of Tony awards, played Dracula in 1979, and
recently received critical acclaim and a slew of nominations for
playing Richard Nixon in Frost/Nixon. Check out this picture of Frankie L.! 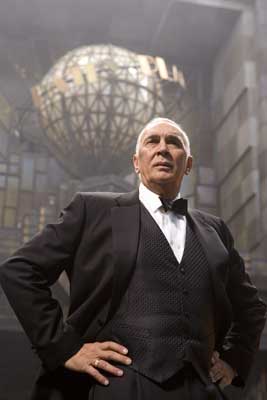 Look
at him. That man is a class act, all distinguished looking and whatnot.
Some critics felt that Langella was robbed of a best actor Oscar win.
I, meanwhile, feel that the moviegoing public is being robbed of a
re-release of Langella’s best role to date, that of…

…motherfuckin’ Skeletor in Masters of the Universe.
Seriously, that’s really Frank Langella as Skeletor, starring opposite
Dolph Lundgren as He-Man and Courtney Cox as Girl Who Just Got Back
from a Springsteen Concert. Apparently the movie was supposed to take
place entirely on Grayskull, but due to budget constraints the movie
producers decided to have most of the movie take place on a cheapo
soundstage on Earth, leaving Langella to scheme and shoot lightning
bolts at his minions from a separate dimension. Although getting
impeached and later disgraced in front of millions during a series of
TV interviews is a pretty raw deal, it’s still not as bad as getting
kicked down a pit by Ivan Drago.

Christian Bale is arguably the Internet
generation’s biggest movie star. Adored by males and females, young and
old, Bale has immersed himself into iconic movie roles like Patrick
Bateman in American Psycho, a magician with a grudge in The Prestige,
and, of course, the Dark Knight himself. It’s all the more alarming,
then, that such a talented and serious actor could have such a big
misstep by starring as the villain in Shaft (shut yo mouth!).
Bale plays Walter Wade Jr., the son of a “real estate tycoon” who
commits a racially motivated murder. Of course, Samuel L. Jackson
(playing the titular Shaft, of course) takes it upon himself to open a
can of whoop ass on this douchey cracka. The movie received middling
reviews and but earned a decent take at the box office — we mainly
look at Bale’s role in a disapproving parent, “You can do so much
better” sort of way.

8) James Earl Jones as Thulsa Doom in Conan the Barbarian

Possessing quite possibly the most distinguishable voice in movie history, James Earl Jones has been in acclaimed films like Dr. Strangelove and The Great White Hope, and his booming voice unmistakably appears in various Star Wars movies and The Lion King. He’s been around long enough (the man’s 78 years old!) that probably even he’s forgotten that he starred as the villain in Conan the Barbarian,
way back in 1982 (before a good chunk of you nerds were even born).
Jones played Thulsa Doom, a warlord who made the mistake of massacring
Arnold Schwarzenegger’s tribe. As the titular barbarian, Ahnuld takes
it upon himself to emit guttural noises and prance around sporting a
loin cloth and an oily sheen, yet somehow it’s still more embarrassing
watching James Earl Jones in the film.

7) Michael Caine as Michael Jennings in On Deadly Ground

Michael
Caine is a six-time Oscar nominee and two-time winner. He’s been in
more good movies than you’ve probably seen, and recently he’s been
pulling in some nice paychecks as Alfred in the recent Batman
installments. For someone as seemingly classy as Caine, it’s a bit
surprising to hear that not only has he co-starred with Clive Owen,
Christian Bale, Charlize Theron, and other distinguished actors, he’s
also acted opposite Steven Seagal. That’s right, Michael Caine starred
as the villain in Seagal’s directorial debut, the environmental
“lesson” movie On Deadly Ground. Caine played Michael Jennings,
a corrupt oil company CEO who learns the hard way that he should take
better care of Mother Earth. I’d make fun of Michael Caine some more
for his seemingly poor decision to act in a action movie about oil
spills, but I’m pretty sure he doesn’t give a shit. After all, he was
in Jaws: The Revenge… playing a dude named “Hoagie.”

A distinguished Latino actor, Raul Julia was a SAG, Golden Globe, and Emmy award winner, and he received critical acclaim for his role in Kiss of the Spider Woman. Sadly, Raul died of a cancer-related stroke in 1994, two months before the release of his final motion picture role as M. Bison in Street Fighter. Not only was this video game adaptation a cringe-inducing disappointment (c’mon, U.S. Army Colonel Guile played by the “muscles from Brussels”?), it’s sad watching an alarmingly sickly and gaunt-looking Raul attempt to portray the towering and imposing Bison.

5) Jack Palance as Xenos in Outlaw of Gor

Jack
Palance isn’t quite as distinguished as many of the other actors on
this list, but he is justly revered. He started out making dozens of
Hollywood westerns and late in his career starred in Batman, the cult
classic Tango & Cash, and won a Best Supporting Actor oscar for
City Slickers. Unfortunately, in between those two peaks, he made some
truly, truly awful movies. Probably all of them were embarrassing, but
only Outlaw of Gor (and its prequel, Gor) made Palance dress up in a
funny hat and pretend to be an evil wizard. Still, Palance’s utterly
undisguised contempt for the film and his fellow “actors” made for one
hell of an MST3K episode.

Best known as the stoic, brisk-walking T-1000 in Terminator 2: Judgment Day, Robert Patrick also had well-received TV roles in The X Files and The Sopranos.
His ability to look both weaselly and creepily intense has earned him a
decent range of acting roles, yet he missed the “intimidating bad-ass”
mark by a mile in Double Dragon. Patrick played Kogo Shuko, an
evil gang leader bent on obtaining half of an ancient Chinese talisman
that will grant him absolute power. Co-starring the host of Iron Chef
America, the guy from Party of Five who’s not on Lost,
and a dikey-looking Alyssa Milano, Patrick attempted the “evil villain”
look but only managed to pull off “Blue Steel with a Vanilla Ice
hairdo.”

You may have recognized Ray Liotta’s piercing blue eyes in such films as Field of Dreams, Goodfellas, Cop Land, Hannibal, and a slew of other movies and TV shows. He plays a mean son of a bitch with the greatest of ease, but I’m starting to wonder if all the fake coke he’s had to snort in various roles has started to rot his brain. Why else would he agree to star in In the Name of the King: A Dungeon Siege Tale? What’s that, you’ve never heard of this turd? That’s because it’s directed by Uwe Boll, the director with the Midas touch (if King Midas turned everything to shit instead of gold), received an abysmal 4% Rotten Tomatoes score, and earned less than $5 million domestically. Liotta plays Gallian, some evil douchebag who controls a race of animal-warriors who kidnap Jason Statham’s wife and kill his son. Statham then has to gallop across the kingdom, killing people and boosting cars while keeping his heart rate above 160 beats per minute…or something like that. Liotta’s only saving grace from this embarrassing role is that it’s quite possible that nobody on this planet has seen the movie.
2) Dennis Hopper as King Koopa in Super Mario Bros

Dennis Hopper has enjoyed a long and storied career, and he’s appeared in some of the most widely recognized and successful films made. Easy Rider? Check. Apocalypse Now? Check. Speed? Hell yeah! Super Mario Bros.? You know it — wait, what? Yes, unfortunately Dennis Hopper inexplicably starred as King Koopa in this train wreck of a movie that some dumb-ass producer mistakenly thought could be successfully adapted from the most well-known video game series in the history of mankind. Only in this adaptation Luigi is the star, koopas are creepy lizard men with shrunken heads, and Dennis Hopper is essentially Bowser minus the whole “looking like a giant cartoon mutant turtle with pointy teeth and a crown.” But yeah, other than that the movie is totally the same.

Aside from Lisa Simpson not knowing how to rearrange his name to come up with a descriptive anagram about him, Jeremy Irons is an established British actor who won an Oscar for his role in Reversal of Fortune and a voice acting award for the role of Scar in The Lion King (hey, that’s the second Lion King voice actor on this list!). He’s also done a ton of Shakespearean plays and apparently owns a frickin’ castle in Ireland. I bet he paid for that with the money he got for starring in Dungeons & Dragons. In it, Irons plays Profion, an evil tyrant (seriously, is there any other kind?) who tries to overthrow a kingdom but is thwarted by a lucky roll of a 20-sided die. The film also starred Marlon Wayans, who probably has enough money from those bullshit [Blank] Movie parodies that he could buy Windsor Castle. Take that, Irons!