Marvel’s Transformers comics were always a bit harder-edged than the weekday afternoon cartoon version of the story. Because of that, some of the Transformers themselves were portrayed with more depth and more bad-assedness than they were on TV. In fact, some Transformers received their defining (and only, in a some cases) portrayals in the comic books. Some characters, like Megatron and Optimus Prime, were forces to be reckoned with in both the comics and the cartoons, although Megatron only really came into his own in the Generation 2 comics. But here are 10 Transformers that were badass not in the cartoons, but in the comics only. 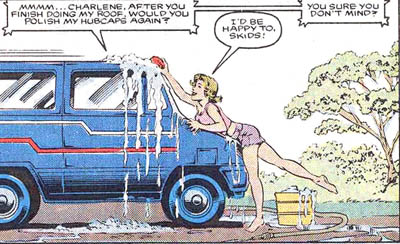 Skids, a minivan from the second wave of Autobot cars, showed up for about 2.5 seconds in the cartoon. In the Marvel comics, he had a personality, which was a good start. After he got injured in battle by the Decepticon Ravage and left behind by the Autobots, Skids kinda said “Screw this” and happily went home with a cute blonde waitress named Charlene who had discovered him in car mode and decided to keep him. Life was good for ol’ Skids for awhile, as he received regular hot, soapy washes from Charlene in her Daisy Duke cut-offs. He eventually revealed his true identity to her and the pair developed what seemed to be an understated, interspecies dating relationship. While Skids sadly decided to return to the less sexy world of the Autobots and relative anonymity, he did manage to defend his woman one last time by tossing an attacking Ravage down a mineshaft, which put the critter out of commission for almost the rest of the series. Ah, to live like Skids for a day. 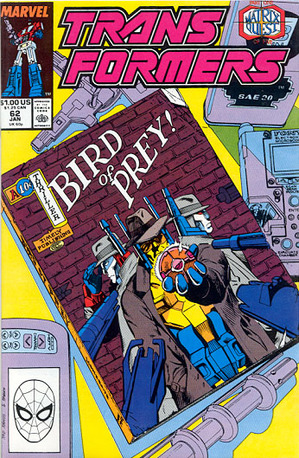 Nightbeat was probably the greatest Transformers character than hardly anyone knew about. A latter-day Headmaster, he was the Autobots’ Sam Spade, a brilliant detective who managed to be both cool and down on his luck. When Decepticon commander Thunderwing took possession of a corrupted Matrix and surprise-attacked the Autobots with it, Nightbeat saved the day by shooting Thunderwing through the chest with a harpoon and blasting him and the Matrix into space. Most fans choose to ignore Nightbeat’s noble but fairly meaningless death in the Generation 2 comics. 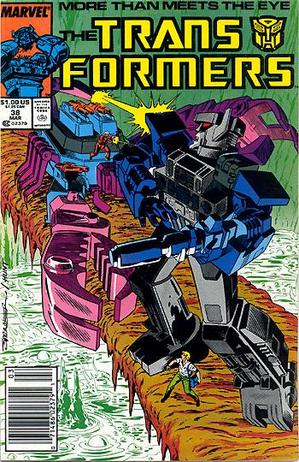 Fortress Maximus made it into the tail end of the U.S. Transformers cartoon, but came across like a gigantic robot drone. In the comics, though, he was a pacifist who was forced back into the war against the Decepticons due to circumstances and inevitability. He also ripped his own head off, as depicted on the front cover of many a Marvel Transformers comic, and became a Headmaster by bonding with a human in a robot suit. He was the stalwart almost-leader of the Autobots for several issues, before the disagreements between Fort Max and his partner Spike were too great for them to continue. They eventually realized they were stronger as one and pulled together to beat the almighty Galvatron into oblivion! They later tried the same thing with Megatron, sacrificing themselves to blow up the Autobot Ark to stop him, but Megatron escaped unscathed. G2 killed way too many characters in pointless deaths. Simon Furman wasn’t perfect, Transformers fanboys.

By the time the Transformers Pretenders came out in the Western world, Marvel’s comic books were the only place to see those characters in action. The toys consisted of gimpy robots that turned into unconvincing robots and hid in bizarre humanoid shells that had a whopping two points of articulation. But with writer Simon Furman at the helm, the Pretenders became some of the coolest characters in Transformers history. Case in point is Thunderwing, a short-term leader of the Decepticons. He was often cool-headed but prone to explosive outbursts, a solid, physically powerful leader who was feared by all. But he became obsessed with finding the lost Autobot Matrix, which had become corrupted. Because of this, it was a perfect match, and Thunderwing became an honest-to-goodness bearer of the Autobot Matrix of Leadership. Infused with power into an evil force of nature, he then awesomely snuck into the Autobots’ ship and devastated several of them before the heroic Autobot Nightbeat managed to eject both Thunderwing and the Martrix into space. Thunderwing and the Matrix then merged into a demonic creature that stood up to Unicron. Sadly, this resulted in Thunderwing being blown to smithereens. But it did take a planet-eating deity to fully take him out, at least.

The Dinobot leader was certainly lovable in the cartoon, but a brightly lit bulb he was not. He wasn’t Einstein in the comic books, either, but he possessed a savage, brutal cunning that most friends and foes overlooked because he talked like a moron.  In the cartoon, he was the dimwitted result of an inane experiment of Wheejack’s to replicate dinosaur life. In the comic, he and the Dinobots were sent to fight Shockwave on prehistoric Earth and all of them were trapped for millions of years in a tar pit. After the untimely and ridiculous death of Optimus Prime due his loss of a video game (long, awful story), Grimlock surpassed the other likely candidates and ascended to leader after he scored an impressive victory over Trypticon, the Decepticons’ T-Rex cityformer. But leadership went to Grimlock’s head and literally, as he began wearing a crown. He did manage to get the Autobots’ crashed spaceship, the Ark, repaired, something it seemed no one else could be bothered with. But then Grimlock decided the Autobots should take flight and abandon Earth. After a short, tyrannical reign, Grimlock finally came to his senses and abdicated power back to a returning Optimus Prime. He went on to kick butt in many more issues, and remained a top authority among the Autobots. 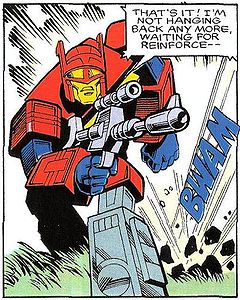 Yes, Blaster was a cool, wise-crackin’ dude in the cartoon. But in the comics he was a hard-edged, brooding badass. Before coming to Earth, Blaster took out Straxus, the Deception leader on Cybertron. When Grimlock took over the Autobots and became a tyrant, Blaster, never one to enjoy being under the iron thumb of authority, said to hell with it and took off. This got under Big Grim’s metal dino skin, causing him to label Blaster a traitor and send other Autobots to hunt him down. When Blaster finally did return of his own volition, the other Autobots begged him to take over as leader. But that jerk Grimlock threatened to kill a bunch of Earth kids if Blaster didn’t submit to imprisonment, and Blaster had n
o alternative. Thankfully, Blaster and Grimlock later realized they enjoyed working together to pummel the Decepticons more than they liked one-upping each other. Oh, and comic Blaster looked like he was wearing cool sunglasses, just like the toy. 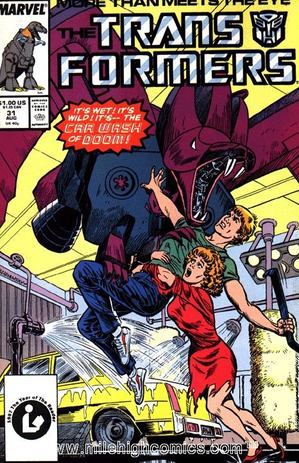 In the cartoon, Ratbat was just another one of Soundwave’s cassette pal pets, but in the comic book he was probably the most successful and most unlikely leader the Decepticons ever had. Say what??? It’s true! Ratbat was a fuel auditor sent from Cybertron to Earth because the Decepticons there were being horribly inefficient. At one point he came up with the idea to use psychedelic car washes to brainwash humans into buying gas for their cars and then forking it over to the Decepticons. As Decepticon leaders (Megatron included) fell by the wayside, Ratbat saw his role as strict bean counter grow into full-time CEO of the Decepticons. Unlike his predecessors, Ratbat was level-headed and effective, smoothly running the Decepticons like a business and managing to inflict heavy losses on the Autobots. His awesome rule came to an abrupt end when he was shot in the back by Scorponok, soon to become the next Decepticon leader, over a powerful energy source called the Underbase that everybody wanted. If Ratbat was guilty of anything, it was forgetting that there’s always somebody in a corporation willing to stab you (or shoot you, in this case) in the back to get ahead. 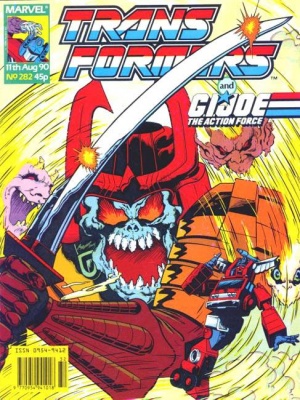 Bludgeon was made of pure kick-ass. He was a Pretender that looked like a skeleton wearing samurai armor. He wielded a sword and trounced foes with his masterful skill of the mystical Cybertronian martial art of Metallikato. He let a band of grotesque, destructive Pretenders called the Mayhem Attack Squad and ended up being leader of the entire Decepticon army, and a pretty damned good one. He was the last leader standing at the end of the G1 comic and progressively led the Decepticons forward to success on a spacecraft called the Warworld. Sadly, Bludgeon lost a duel to Megatron in the G2 comics and was easily blown to smithereens. Once Megtaron saw how successful Bludgeon had been, though, he was sorry that he had killed him. 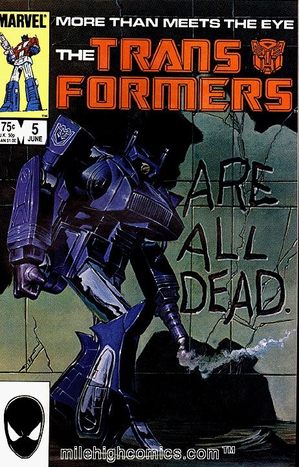 Cartoon Shockwave was kinda cool, but only because of his look and voice — not because of his character, since he wasn’t much more than Megatron’s supreme lackey who watched over a boring Cybertron for millions of years, just waiting for his beloved leader to call. But in the comics, Shockwave was logical and that logic told him that he needed to kick Megatron’s robo-ass and take over. Which he did, and easily. He went on to create the Constructions and terrorize humankind. Shockwave would face a few setbacks, but the leadership of the Decepticons always seemed to keep coming back his way. 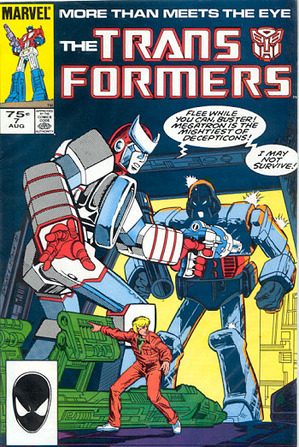 Cartoon Ratchet was the friendly, grinning Mr. Fix-It of the Autobots who died like a background bitch in the movie. Comic book Ratchet could be argued to have been Megatron’s true nemesis, surpassing Optimus Prime. Ratchet also died in the comics, but after one hell of a run. He only wanted to be a Doctor, but was constantly forced into personally saving the Autobots from their doom. At one point, Ratchet found himself to be the last Autobot standing after the diabolical Shockwave took out the rest of the Autobots and then deposed Megatron. Using his strongest asset – his cunning – Ratchet made a deal with Megatron in which the deactivated Autobots would be freed in return for Ratchet uncovering the Dinobots from their tar pit prison and using them to defeat Shockwave. Anticipating Megatron’s double-cross, Ratchet instead set the Dinobots loose on Megatron in a sneak attack on snowy cliff. When that failed, Ratchet valiantly tried by himself to defeat the stronger Decepticon. Thankfully, an avalanche finished off Megatron that day. Much later, Ratchet tried to sacrifice himself and wipe out Megatron for good by trapping them both within the radius of several exploding bombs. What actually happened was that that the two merged into one hideous, co-dependent creature. Optimus Prime had them separated, and Ratchet sacrificed himself once again by plunging Autobot spaceship the Ark down to Earth (bringing the story full circle) and taking Starscream, Megatron, Galvatron and Shockwave with him. While Megatron would resurface in the Generation 2 comics and Ratchet would not, there’s no denying Ratchet’s important role as a reluctant but effective man of action in the Transformers comics.