Red kryptonite might be the greatest plot device ever created. Created in the Silver Age when comics were primarily read by children, this kryptonite didn’t hurt Superman like its green counterpart, but instead used its weird radiation to seriously screw with Superman each time he encountered it, doing anything from simply taking over his mind to bizarrely transforming him. Even the laziest writer in the history of comics could poop out an entertaining “red k” tale after the typical 1960s comic writer lunch of gin and much more gin, which is likely why Supes happened to have so many ludicrous run-ins with the stuff, and possibly why red kryptonite almost never did anything cool to him. Here are the nine most absurd red kryptonite effects have had on Superman. 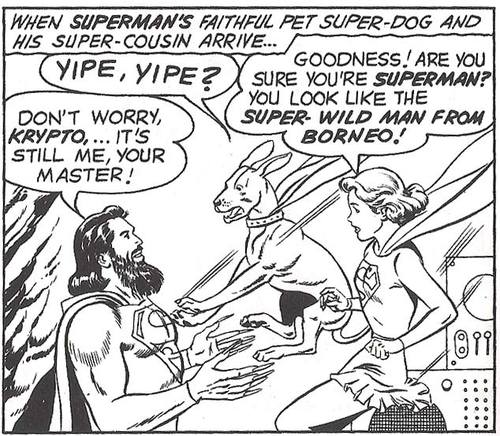 In this story, “red k” exposure gives Superman “crazy” long hair and a beard, not really a big deal by today’s standards, but it was pretty close to having a hammer and sickle pop up on his forehead in the ’60s. Superman then began to speak with a British accent and write fantastic graphic novels that deconstruct the superhero mythos, followed of course by violent tantrums when his work was optioned for movies. 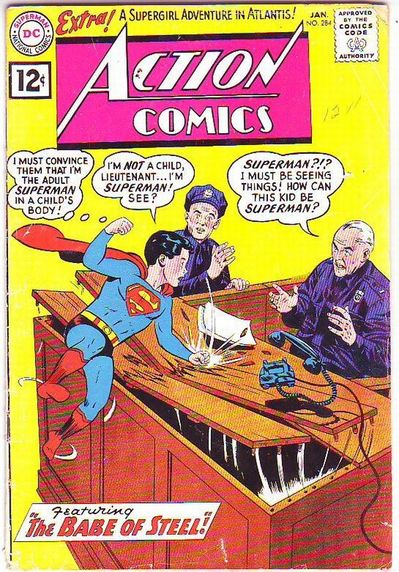 Superman is transformed into a toddler with the mind of an adult, which isn’t really a grand tragedy considering that little kids have tons of energy and the fact that he still has his powers and adult mind. Clearly, he’s mostly upset about his baby penis. 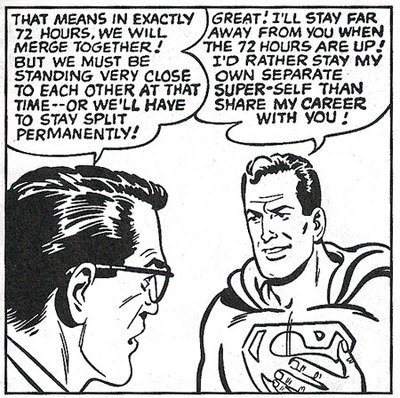 Superman is split into two parts — one a good Clark Kent and the other an evil Superman. Clark keeps begging the other to “merge” with him, but evil Supes wants none of it and a predictable fight ensues. There is nothing all that shockingly bad about this story other than the terrifying revelation that Superman 3 may actually be the most comic-based film in the Superman franchise. I mean, Pryor aside, Evil Superman vs. Good Clark Kent is way, way closer to the comics than any fucking Lex Luthor real estate scam. 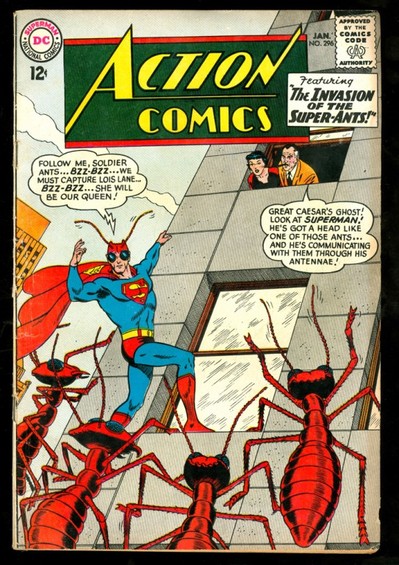 In what seems like a cheap throwback to 1950s science fiction films, giant ants arrive on earth and kidnap Lois as their queen (she presumably smells like sandwiches). Superman flies through a conveniently located cloud of “special red kryptonite” that allows him to manipulate his transformation if he wishes hard enough (uh-huh). Superman then gets a really stupid ant’s head, does some embarrassing “buzz buzz” talking and the day is saved without any scenes of Superman killing the ants. The issue ends with dopey big head Superman warning the Earth that if we don’t avoid Atomic War, the ant head he wears will be our future. Forget about those scarring Hiroshima images, kids — we’re all getting antennae! 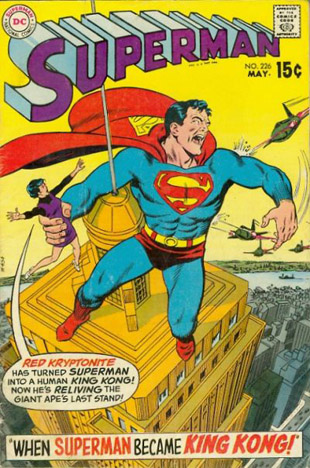 Clark and Jimmy go on a man-date to the movies and red kryptonite is the prize in Jimmy’s Cracker Jack box (seriously). This causes Superman to grow giant and do the whole King Kong routine, complete with carrying Lois to the top of a nearby skyscraper. No wonder Marvel comics was kicking ass in the late ’60s — Superman was doing King Kong parodies that Archie wouldn’t touch. 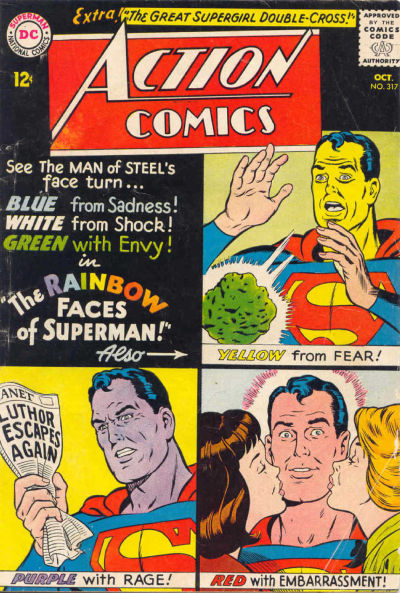 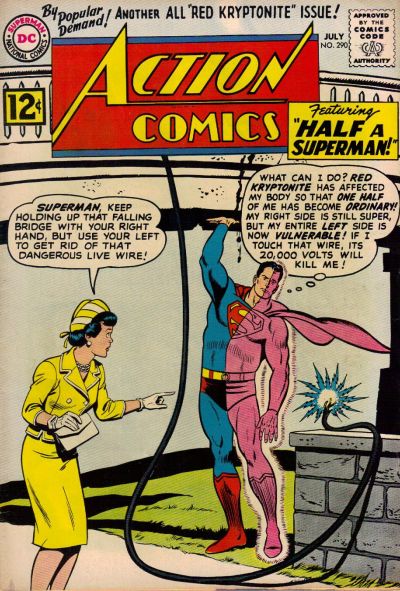 Red kryptonite has robbed Superman of his invulnerability along his entire left side of his body (the same thing happened to my uncle, it wasn’t kryptonite but red meat, lack of exercise and liquor). Like all “red k” stories, the biggest threat in this was Lois figuring out that Clark and Superman were the same, meaning it wasn’t much of a threat at all.

This issue sees red kryptonite giving Superman the power to blow flame from his mouth (which is balls-out awesome) and then gives him the power to grant his every wish (why does he not like it again?). I imagine if Superman was like any regular guy, nine months later several incredibly strong, fatherless babies with spit curls would be born. No such luck, as Ol’ Super Square wishes for Sherlock Holmes and the advice of his parents. No wonder Batman doesn’t return his calls. 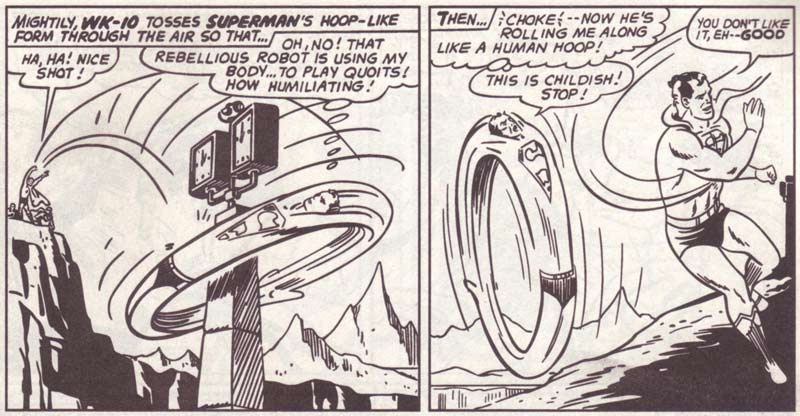 Superman finds an alien robot in his junk drawer and it sweet talks gullible ol’ Superman into building him some creepy playmates that all look like him. Once built, the robots malfunction and decide to play Deliverance and tell Superman he’s going be Ned Beatty. This leads to red kryptonite and Superman becoming a human Stretch Armstrong that they abuse in somewhat amusing ways until he is saved by another deus ex machina, which makes this whole story a bag of misery.