Fans of Mobile Suit Gundam and its many descendents will tell you, often at insufferable length, that the 30-year-old anime franchise is a grim saga of futuristic war waged with enormous robots. That might be true on the surface, but there’s another side to the Gundam universe, a side that has little to do with battlefield trauma, cutthroat politics, and doomed romances. It’s a side full of stupid-looking robots, and we’re covering those robots now.

Astute readers will note that an overwhelming majority of Gundam’s dumbest robots come from Mobile Fighter G Gundam, the crown jewel of giant-mecha nonsense. It’s truly hard to match a series that takes every warped, Japan-born stereotype of foreign countries and builds them into different international fighting robots, but perhaps we’ll find space to squeeze in some other nonsensical Gundam machines.

G Gundam in a nutshell: In the future, “Neo” versions of modern countries settle their differences by sending their champion robots off to a huge Gundam Fight. So what does Neo-Portugal get? Well, Portugal’s major industries include oil, textiles, and cork, but no kid would watch a cartoon with a robot that merely floats in water and stops up wine bottles. So it’s a Jester Gundam that represents Neo Portugal. Of course, the capering harlequin robot is piloted by an equally hideous clown. 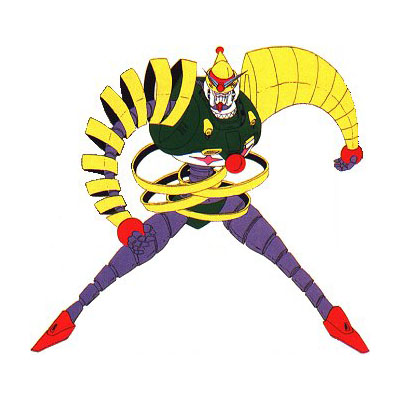 It gets better: there’s nothing quite as terrifying to a child as a clown, so it turns out that Chibodee Crockett, the pilot of Neo-America’s Gundam Maxter (with its boxing gloves and football helmet), saw his mother gunned down by terrorist clowns when he was a child. He faces the horrible clown-bot in battle, and only a patriotic song can bring him around. Like every other hilarious moment in G Gundam, this turn of events is played with straight faces on everyone involved.

In a way, G Gundam is director Yasuhiro Imagawa making the most of a really horrible idea. When shown the initial designs, he realized just how silly it all was and ran with it. Thank heavens he did, or else we’d never see American gridiron-boxing robots beating up mechanical clowns.

Grizzly Gundam is clear evidence that Canada needed to step up its global public-relations back in the 1990s. When G Gundam‘s producers set out to stereotype every non-Japanese nation, they passed on the chance to make a robot that looked like Dudley Do-Right or a beaver or a giant maple leaf. Instead, they came up with a lumberjack robot, complete with hand axes and a head shaped like a knit cap. It was originally named Lumber Gundam, which was changed to Grizzly Gundam for North American viewers. 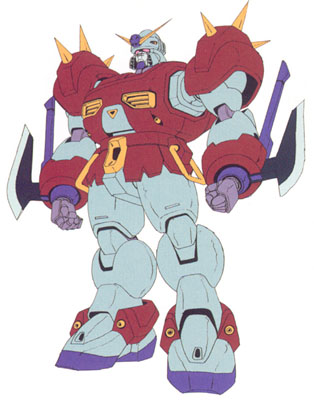 Yes, there’s an unfortunate backstory involving the Neo Canadian pilot and his grudge against the Neo Russian pilot and his ushanka-headed robot. Revenge truly is a dish best served by a robot that looks like it’s about to throw hockey sticks and huge mechanical pieces of back bacon.

Calling Gundam “the Star Wars of Japan” will invariably provoke someone to point out that Gundam is often more bleak in its approach to warfare than the space-opera puffballery of Star Wars and that you are therefore wrong wrong WRONG to compare them. However, it’s hard not to liken Gundam creator Yoshiyuki Tomino to George Lucas. Both of them got lucky with pop-culture phenomena in the late 1970s. Just as the best parts of Lucas’ sci-fi creation were helmed by other people, Tomino had little involvement with the highest points of the Gundam franchise (those would be Gundam 0080 and…well, G Gundam). And, like Lucas, Tomino has lost his mind.

Whatever muse Tomino had fled several decades ago, yet he’s still the creator of Gundam and he still gets to put all sorts of insane things into major animated series. One of these is Turn A Gundam, an unorthodox show from 1999 that strove to break mecha-anime stereotypes and, like most Tomino series, just ended up unappealing and strangely comical. But hey, it gave the world another soundtrack stolen written by Cowboy Bebop composer Yoko Kanno and a Gundam with the most amazing mustache in robotics history.

Designed by artist Syd Mead, the Turn A Gundam looks compellingly odd with its attempt at facial hair, but it goes even further by locating the pilot’s cockpit in its crotch. This may have been Mead’s idea, but one could also blame Tomino for it. Groin-level access holes were seen on the robotic creatures in Brain Powered, a staggeringly inane mess of a robot show that was supposed to be Tomino’s crushing retort to the success of Neon Genesis Evangelion. Brain Powered was a flop, and even Turn A Gundam, despite its commemorating the 20th anniversary of Gundam, was not a towering success. Sunrise, the studio that produces Gundam, hasn’t announced anything big for the franchise’s 30th anniversary, perhaps because they’re afraid of where Tomino might put the cockpit next time.

In the Japanese version of G Gundam, Neo Holland’s robot was known as Nether Gundam. In the North American version, it was Hurricane Gundam. But anyone who sees it will dub it the only name it should ever be called: Windmill Gundam. 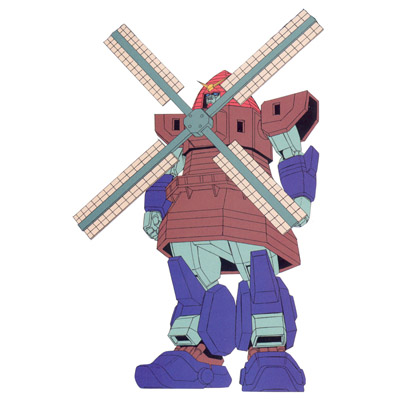 Sadly, Windmill Gundam’s time in the spotlight was short-lived, as it was soon demolished in its match against Zeus Gundam. Speaking of which…

Even in the future, Greece is still known for its myths, which apparently can be reduced to a big bearded guy throwing lightning bolts. And that’s Zeus Gundam, the mecha champion of Neo Greece.
>
G Gundam is a stereotype-driven show, but it goes above and beyond the call by outfitting the Zeus Gundam with wings, a beard, a toga, a lightning attack, and a full chariot with a robot horse named Hercules. Also, its pilot is a huge Greek dude named Marcelot Chronus who looks a lot like his robot.

So what robot does Neo Sweden get in the world of G Gundam? Well, Neo Norway already claimed the Viking Gundam, so Neo Sweden gets a Gundam named after Swedish industrialist and prize-giver Arnold Nobel, with the name changed to Noble Gundam for the English version. 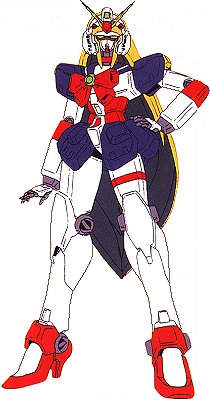 From the look of the Gundam that bears his name, Arnold Nobel must’ve been a big fan of sailor-suits and rhythmic gymnastics. See, the Neo Swedish Gundam is a feminine robot with blond hair, a laser ribbon, and a Sailor Moon outfit. This even figures into the story, as the Noble Gundam’s fight with hero Domon Kasshu and his Burning Gundam ends with the slender, girlish robot swooning in the large, manly Gundam’s arms as though they’re posing for the cover of some mecha bodice-ripper.

The Noble Gundam is controlled by Allenby Beardsly, the only female pilot who officially enters the show’s Gundam tournament. She’s introduced as a friendly rival and love interest for Domon, but it turns out that she’s liable to go into a murderous berserker rage in the heat of battle. Ha ha! Women and their crazy hormones! Am I right, fellas?

To
put it delicately, anime’s track record of portraying people of African descent is…less than commendable. In fact, it usually proceeds along the lines of this scene from Sakigake!! Otokojuku.

Compared to that, G Gundam really isn’t so bad. Well, sort of. Okay, so it is pretty bad. There’s a Gundam from Neo-Kenya, and it’s called Gundam Zebra. It has zebra-head epaulettes, a tribal robe, a shield, and a telescoping spear. 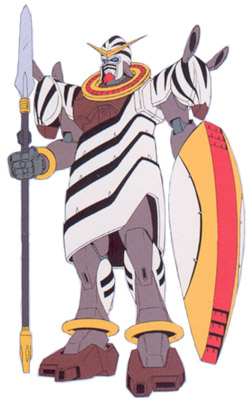 There’s nothing particularly racist about Gundam Zebra’s showing in the Gundam tournament. It’s another lightweight robot opponent that gets dusted by Domon, who, as a Japanese hero with a tragic backstory, enjoys both physical and moral superiority over all of the other Gundam pilots.

Many of G Gundam‘s sillier robots are based on animals and other objects: the Neo Malaysian Skull Gundam and the Neo Indian Cobra Gundam, for example. None looks quite as daringly retarded as the Toro Gundam, known as the Matador Gundam in the show’s original Japanese version. Looking like a playset from an ’80s toy line like Battle Beasts, the Toro Gundam is a huge robotic bull’s head with arms, legs, the traditional Gundam face, and a huge matador’s cape. 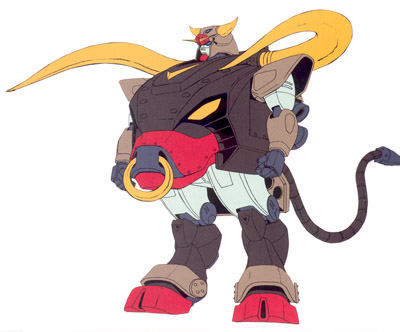 Oh, and the Toro Gundam gets its robot ass beat by a huge mechanical fish. This is, believe it or not, far from the most preposterous scene in G Gundam.

Mermaids come from Denmark, right? Or at least mermaid robots do, don’t they? No? Well, Hans Christian Andersen, author of The Little Mermaid, was Danish. And since the pilot of Neo Denmark’s Mermaid Gundam is named Hans, we can only assume that someone at Sunrise made that dubious connection for G Gundam. 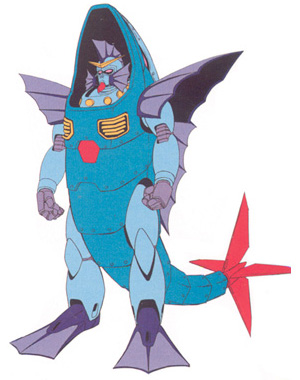 With its trident and transformed fish mode, Mermaid Gundam put up a valiant fight, but this wasn’t quite enough to qualify it as one of the leading heroes, as those roles are reserved for the Gundam fighters from France, Russia, China, America, and, of course, Japan. Of course, the real tragedy is that the crazy Japanese man who dreamed up “Mermaid Gundam” for Denmark didn’t think of “Hamlet Gundam” first.

Hoo boy. Let’s all come up with a single word to describe the whole of Mexican culture, and then let’s apply that word to a giant robot. Here’s G Gundam‘s answer: Tequila Gundam. And while it was changed to “Spike Gundam” for us Westerners, there was no way the mecha’s true identity could be covered up. 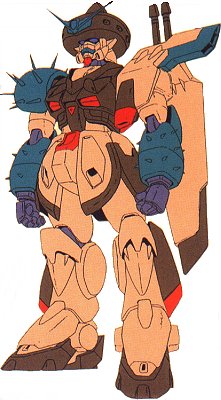 Even before G Gundam was released in North America and shown on Cartoon Network for children everywhere, the name of Tequila Gundam was bandied around by anime viewers to sum up the pure stupidity/brilliance of the show. It’s not just that the robot is called Tequila Gundam, either. It has a Frito Bandito mustache and a sombrero. And it goes down in record time.

So what’s missing? Well, maybe the Gundam could fire some six-guns into the air while screaming Speedy Gonzales’ catchphrases. Then it would hit a giant, exploding pi?ata toward its enemies. And then the show would have to end, as it could never top that.